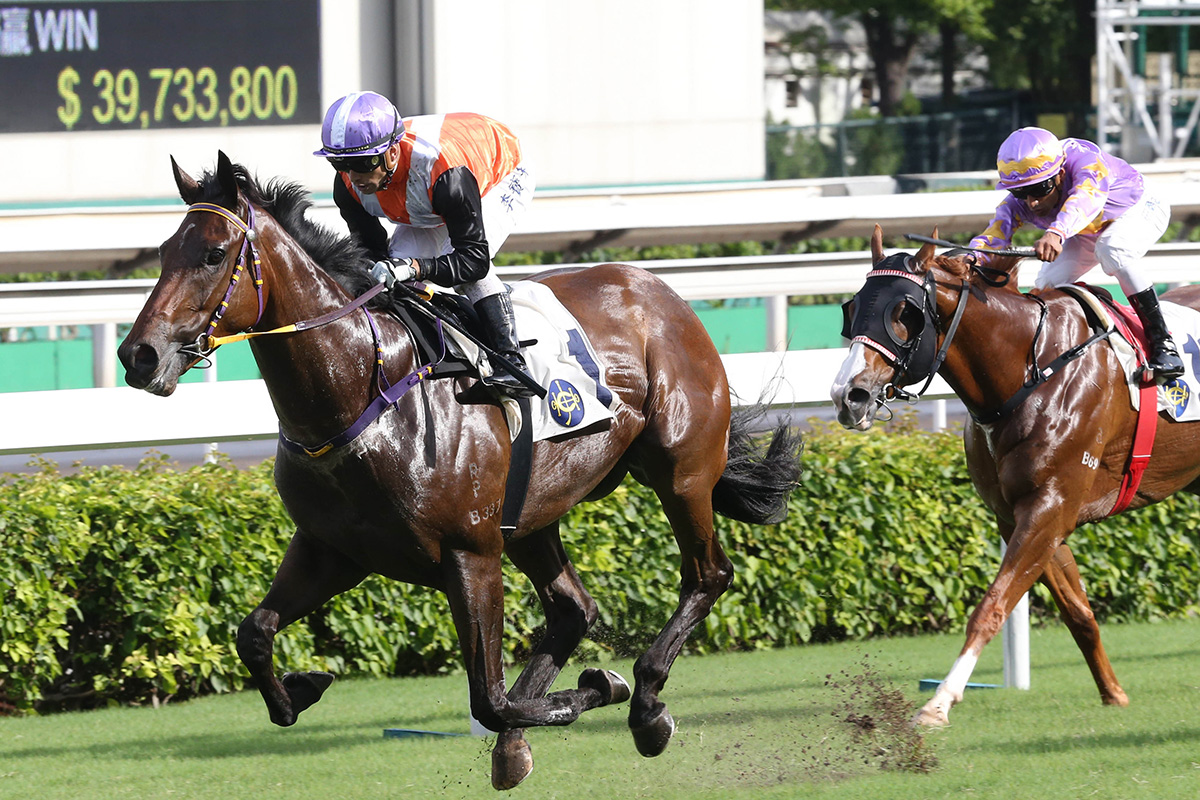 A budding star of the Hong Kong circuit was unveiled at Sha Tin on Sunday when 3YO sprinter Cruising did exactly what his name suggests in winning the Gunangdong-Hong Kong Cup over 1200m.

The Australian-bred son of Danerich was having just his second start in Hong Kong but ‘stole the show’ after pulling clear in the straight to win comfortably.

Cruising had four starts in Australia for owner/trainer Bill Bogarts, signing off with successive wins at Morphettville in November and December before heading to Hong Kong in February.

Racing in Hong Kong for the first time on 9th June, Cruising was beaten a lip by Alcari but, according to jockey Umberto Rispoli, his horse would have turned the tables had they met on Sunday.

“Last start Cruising was just looking for company and went stride for stride, but this time when I asked him for an effort, he responded very well,” Rispoli enthused.

“He’s a very interesting horse and I think there’s a lot more to come.”

(Just to keep it all in the family, Buttler part-owned and stood Keltrice throughout the stallion’s career where his stakes winners included Group One Hong Kong Chairman’s Sprint Prize winner, Del Este).

In operation since 1990, Rangal Park has bred some outstanding performers including Northeast Sheila, Satin Robes and Jacqueline Rouge, and secured Danehill’s Group winner Danerich, for stallion duties in 2006.

The stallion has also had a major pedigree update over the past 12 months being a half-brother to multiple Group One winner Redzel.

“I’m not surprised Cruising has done so well,” Buttler points out.

“He was a lovely colt. We normally take a few across each year to Adelaide for the Magic Millions Yearling Sale and Cruising was purchased for $21,500 by Bill Bogarts.

“I’m glad he did so well for Bill and hopefully he’ll step right up in Hong Kong.

“Cruising’s dam missed one year and had a dead foal the next, but I’m happy to say she’s back in foal to Danerich and will definitely be heading back to him this spring.”

It proved to be a highly successful international Sunday for Rangal Park as the farm also bred Singapore winner Song To The Moon (6 wins), which was sold for $85,000 at the 2014 Inglis Melbourne Premier Yearling Sale.