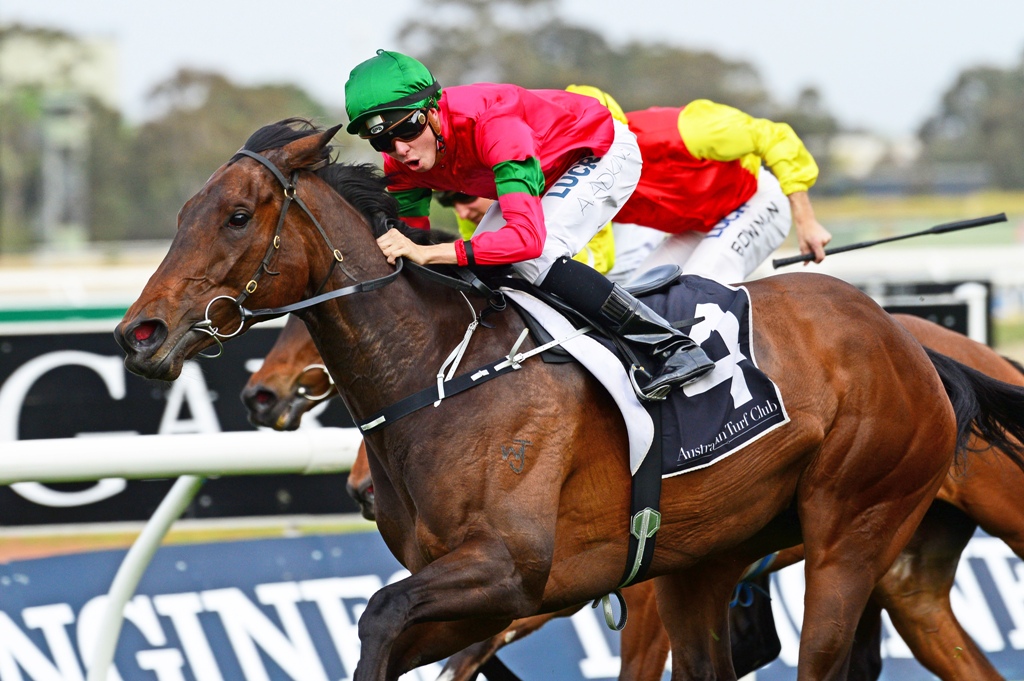 Owners Jack and Anthea Griffin have seen all of Daysee Doom’s runs.

Her first three starts – all wins – at Hawkesbury, Canterbury and Rosehill.

Her first lot of black type when third in the Group Two Millie Fox.

They particularly enjoyed the mare’s victory in the Group Three Dark Jewel Classic at Scone.

However, on Saturday in the Group Two Golden Pendant Stakes over 1400m at Rosehill Gardens, it was the first time the Perth based couple had seen Daysee Doom ‘live’.

“We actually bred Daysee Doom, but never clapped eyes on her before Saturday,” Jack Griffin explains. “We’ve cheered her on mainly from the comfort of our lounge room but decided to come across for the Golden Pendant … and we’re glad we did!”

After winning the Dark Jewel in May, Griffin told Aushorse of the mare’s tendency to hit the lead in the closing stages of her races, only to be overhauled on the wire, as was the case with Zanbagh in the Emancipation and Shillelagh in the Hawkesbury Crown.

That was certainly in the back of Griffin’s mind on Saturday – momentarily at least – when Daysee Doom strode to the front in the Golden Pendant, only to be (seemingly) challenged by stablemate, Dixie Blossoms as the post loomed.

“I thought for a while there I might have put the mock on her by coming across but she held on to get the win,” a delighted Griffin points out. “(Trainer) Ron (Quinton) and (jockey) Andrew Adkins were confident she’d hold on, but you never know for sure until they’ve crossed the line. What a terrific mare she is. Her last seven starts have all been at Group level for two wins, two seconds, two thirds and a fourth.”

The importance of the Golden Pendant win is also underscored by the Griffins loss of Daysee Doom’s dam, the Mister C mare, See A Victory.

“The family has been quite successful … I raced Daysee Doom’s mother, See A Victory, who was only small but had plenty of heart, winning three and running third at stakes level in Perth,” Griffin adds. “Unfortunately, See A Victory only produced the one runner. Her next foal was a Street Boss who died and then the mare died a few days after that.

“I also had the Salieri mare, Antelliere, at one stage and bred Bluebird The Word who won a Group One in New Zealand, along with Porto Roca, who won the (Group One) Coolmore Classic and is the dam of Dubai World Cup winner Monterosso. She’s also the granddam of (2017 Group One winner) Silent Sedition.

“We’ve scaled back though and only have Daysee Doom now.”

Not a bad fallback position!

And where to next for Daysee Doom?

“We’ll leave that entirely up to Ron, but he did mention the (Group Three) Angst Stakes at Randwick in two weeks, or there’s also a stakes race for mares coming up in Melbourne.”

Meanwhile, Daysee Doom’s Golden Pendant win was yet another timely result for her sire, the Aquis Farm based, Domesday, whose 3YO colt, Royal Symphony, maintained his unbeaten record with a victory in the Listed Pin & Win Stakes (also over 1400m) at Flemington the previous Saturday.

Aquis, which purchased Domesday from Darley at the start of 2016, reveals that Domesday is currently working his way through a large book of mares this spring.

“It’s actually his biggest book to date,” Aquis Farm’s Jonathan Davies reveals. “He covered over a 100 mares in 2016, but in light of Daysee Doom, Royal Symphony and company, he’ll easily eclipse that figure this spring.

“There are close relations to Royal Symphony that will be covered by Domesday and our new stallion (Caulfield Guineas winner) Divine Prophet and while there’s still a few openings to Domesday, they’re closing pretty fast after Saturday.”