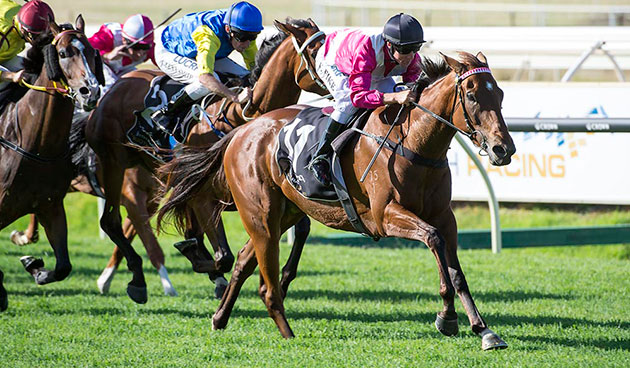 After a narrow second last time out to stablemate Perfect Reflection in the Group 1 Kingston Town Stakes (1800m), Delicacy was simply too classy on Saturday, winning the Group 2 C.B. Cox Stakes (2100m).

The length and a half victory, her eighth at black type level, further highlights her full-brother who will go through the ring at February’s Perth Magic Millions Yearling Sale as part of Scenic Lodge’s draft.

Settled back in the field, the four-year-old mare came with a well-timed run by jockey William Pike to hit the lead 200m from home, pulling away to defeat Black Heart Bart and outsider Bass Strait, with the winner’s stablemate Real Love back in fourth.

“She knew what she needed to do and when she cut to the inside of those other horses before the straight she just felt so good,” Pike said.

“She towed me through and I was telling myself not to go too early.”

The question now remains will Delicacy head to the Group 2 Perth Cup (2400m) on January 2 where she is bound to start a short price favourite and will also be asked to carry the top weight after the withdrawal mid-week of Extra Zero.

“For Delicacy there are other races available to her in the East.”

“Real Love is a bit different. With her high rating the Pinjarra and Bunbury Cups are probably out of the question.”

“Both of these horses are mares and we need to consider their futures as broodmares.”

One of three winners on the day at Ascot for owner/breeders Bob and Sandra Peters, Delicacy’s record stands at 11 wins from 18 starts and over $1.8 million in earnings highlighted by dual Group 1 success.

The four-year-old mare is the most accomplished runner for the Emirates Park-based Al Maher, with the mare being the only Group 1 winner for the sire not trained by Gai Waterhouse.

Saturday’s victory by Delicacy in her home state is sure to bring further attention to the three yearlings being offered at the 2016 Perth Magic Millions Yearling Sale by Danehill’s Group 1 Australian Guineas winner Al Maher, but none more so than Lot 140, Delicacy’s full-brother who will be consigned by Scenic Lodge.

“We are very excited to be offering a full relation to Delicacy in the Perth Sales,” stated Scenic Lodge’s Jeremy Smith.

“He is a big tall type that looks like he may need a little time to fill into his frame. Certainly appears a staying type like his sister.”

With the colt likely to be one of the most highly regarded in the sale, the $4,000 paid by Scenic Lodge to secure his dam Simply Wicked carrying the colt at the 2014 Inglis Broodmare and Weanling Sale was an extremely astute purchase.

“I went to the sales to look at a few mares for Scenic Lodge and thought if something came up in my price range that suited I may get a mare myself. Simply Wicked appealed as she was by Scenic, a stallion who we stood at Scenic Lodge, and the mare was well bred and a city winner from limited race starts.”

“She was one of the last lots to go through the sales and being a Western Australian mare in a Sydney sales, not to many would have given her much regard.”

“The main thing though was the timing as Simply Wicked’s first foal had not performed on the track and Delicacy was not highly regarded finishing well back in two barrier trials. Not long after I purchased the mare, Delicacy won at her first start at big odds at Belmont and has kept improving ever since.”

“Simply Wicked’s three-year-old called Universal Law (Beneteau) is also a very promising horse and could add more black type to the mare. So very luckily for me she was sold when she was.”

While Lot 140 is likely to be the headline act in Scenic Lodge’s draft, there are others that Smith is excited about.

“Scenic Lodge has a large draft headed by 18 lots by our champion sire Blackfriars,” enthused Smith.

“Blackfriars has won the WA Sires premiership for the last 5 season and again is well out in front this season.”

“A couple of Blackfriars that could be sale highlights include Lot 276, the Blackfriars x Crossed Wires colt who is an outstanding powerful individual and is a three-quarter brother to WA Derby winner Rohan.”

“We also have Lot 252, a classy Blackfriars filly out of the Group 3 winner Card Queen, making the filly a half-sister to the Magic Millions winning two-year-old a few seasons ago in Karuta Queen.”

With Simply Wicked foaling a filly by Scenic Lodges’ Blackfriars in mid-October, the mare was sent to Widden Stud where she is now safely in foal to Group 1 Golden Slipper winner Stratum and like every foal since Delicacy, the resultant foal will be bred on the successful Danehill x Scenic cross.