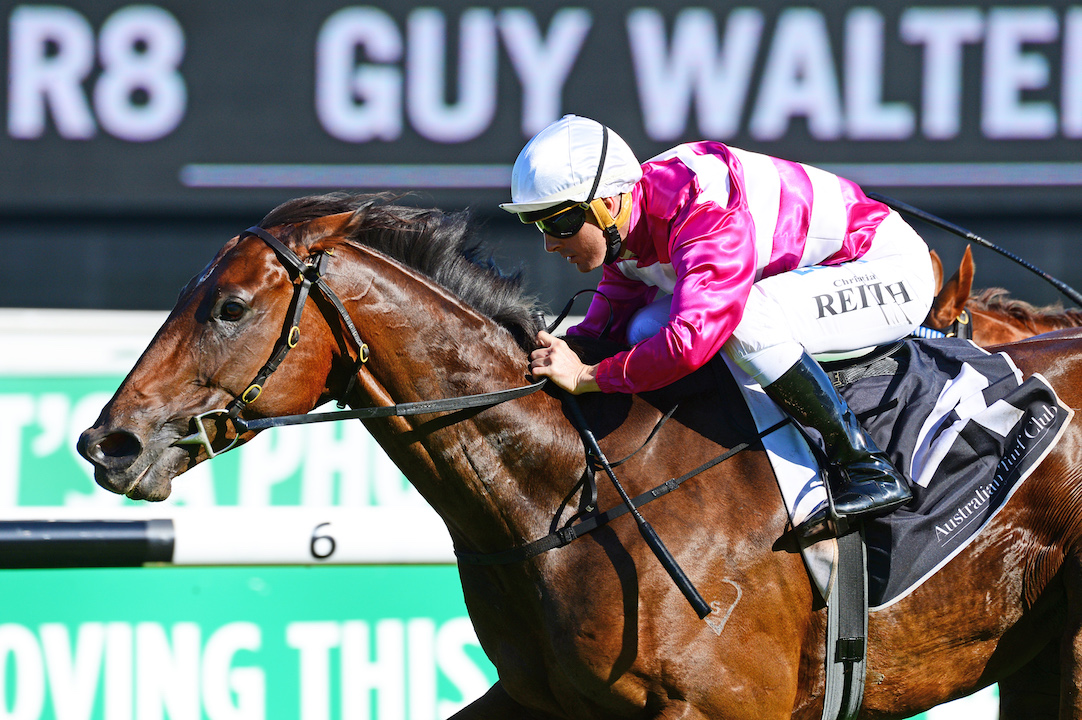 The $600,000 Group One Coolmore Classic at Rosehill Gardens on 17 March is shaping into a genuine … well, classic.

And now they’re likely to be joined by Ron Quinton’s Dixie Blossoms after the 5YO mare resumed with a powerpack performance on Saturday to win her second Group Two Guy Walter Stakes in a row: coming from near last on the turn before flying home to win with a panel to spare over the 1400m at Royal Randwick.

It was Group win number four (and sixth win overall) for Dixie Blossoms – pairing nicely with successive Group Three Angst Quality Handicaps – along with nine placings and $899,910 in prizemoney.

Randwick trainer Quinton, who will also saddle up Daysee Doom, believes “it’s going to be one of the best Coolmores you’ll ever see” and admitted to being relieved after the run.

“We had her (Dixie Blossoms) in great order and she was in a little bit of an awkward position but she got the job done,” Quinton points out. “There are some really nice mares going around the place and there are no easy ones (to win). You win when you can.”

Meanwhile, when contacted on Sunday, Dixie Blossoms’ breeder/owner, Alan Osburg, sounds like he (a) did too much cheering or (b) too much celebrating, but the scratchy voice, unfortunately, is due to the “dreaded lurgy”.

Still, Osburg was elated with the victory and hopes his mare can grow the Group Two into a Group One.

“She (Dixie Blossoms) has been very unlucky in Group Ones … she was beaten a length when fourth in the 2016 Myer Classic, ran third – beaten a length – in the Queen of the Turf and, according to Corey Brown, was a certainty beaten when third (by a neck) behind Shoals and Eckstein in last November’s Myer,” Osburg reveals.

He’s clearly hoping for a better deal from Lady Luck in a fortnight.

Osburg has been “tinkering” with racehorse ownership for around 30 years and usually races one or two at a time.

He struck the jackpot in 2002 however when he became the owner of a Danehill colt which would be named Exceed And Excel.

Talk about living up to his name!

The Tim Martin trained, Exceed And Excel, would become Australia’s Champion Sprinter, winning six races including the Group One Newmarket and now Group One Sir Rupert Clarke (in track record time) before heading off to a career at Darley Stud.

From the breeding barn, Exceed And Excel has produced over 140 stakes winners of $145 million in stakes and has been both a Champion Australian Sire and Champion Sire of 2YOs.

“I was actually at Darley when I saw Street Sense (sire of Dixie Blossoms) for the first time and thought what a beautiful type he was. I’d always liked Street Sense’s sire, Street Cry (also sire of Winx), so I decided to send my mare, Whistle Dixie to him.

“Funny thing is, Dixie Blossoms’ year older, full sister wasn’t worth a stamp and, initially, there wasn’t much to Dixie either. She was a bit small and the pedigree wasn’t too fashionable at the time. I usually keep and race the ones I believe won’t sell and Dixie fell into that basket.

“Whistle Dixie was a real favourite of mine – you get attached to them – but unfortunately Dixie Blossoms was her last foal.

“What a good one to go out on though!”