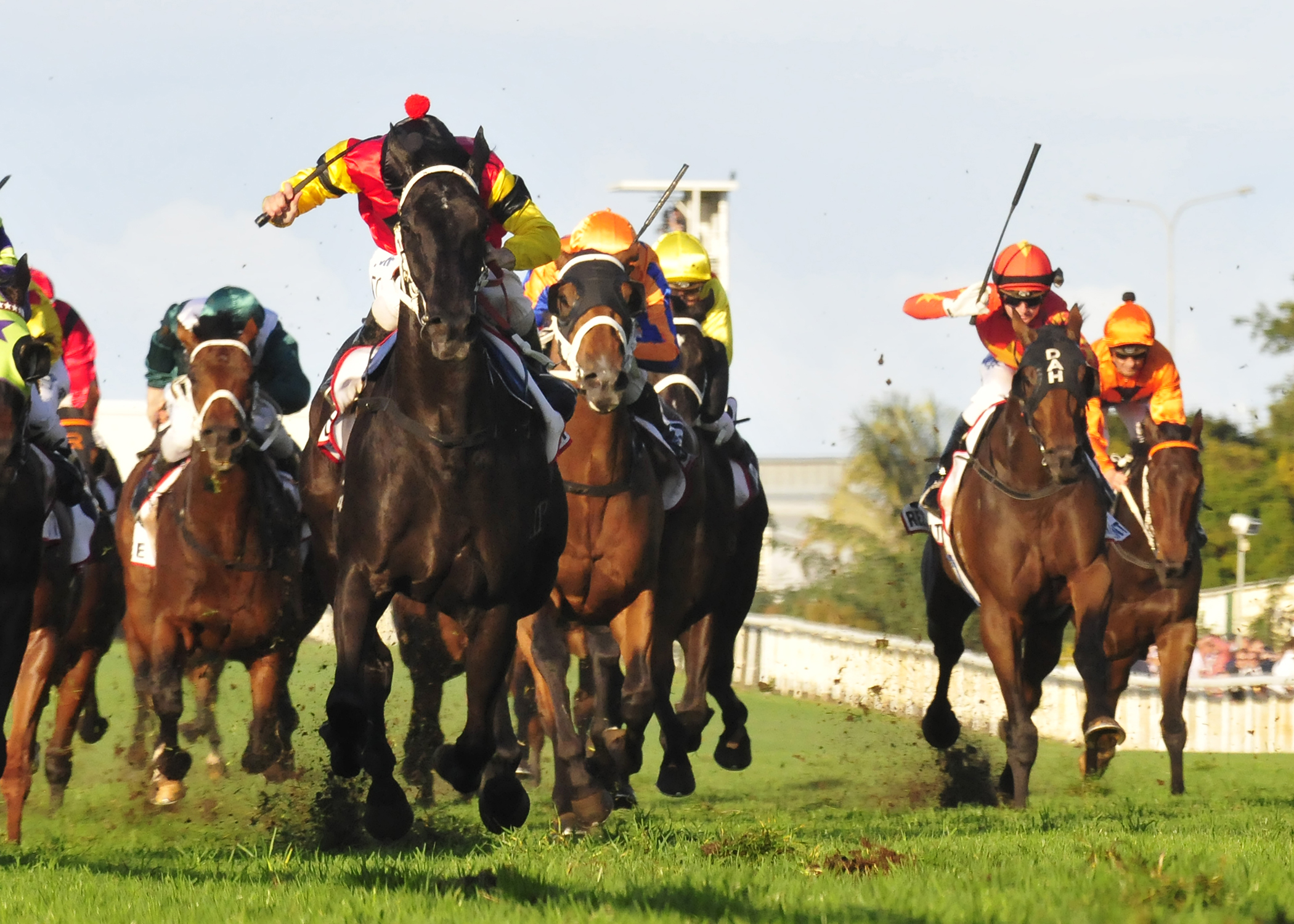 It truly was the stuff that dreams are made of.

For Saturday’s Group One Channel Seven Queensland Derby, all the cracks had gathered for the fray, including a Frankel colt which had been sold for $1.6 million as a yearling.

Yet, most of the attention was duly focused on the Kerry Parker trained, Dark Dream.

He was sent out a $4.20 favourite for the blue riband based largely on a four length romp in the Group Three Rough Habit over 2000m at Doomben on 12 May and an unlucky third in the Group Three Grand Prix – over the 2200m Derby trip – a fortnight later.

And despite getting plenty of attention over the closing stages from Grand Prix winner Heavenly Thought and Youngstar – who was seeking to become the first filly in 10 years to capture the Queensland Oaks/Derby double – Dark Dream would prevail in a thriller.

The victory would also ultimately give Australian-breds a clean sweep in this season’s Group One Classics: the Derby and Oaks in Melbourne, Sydney, Adelaide and Brisbane.

Yet, despite the vast potential for this rising star, who has now raced on 10 occasions for four wins and six placings, Dark Dream’s background would be considered ‘humble’ to say the very least.

Enter breeder and owner, Mary Jane Basson, who recalls sitting down and having a coffee at the Inglis Newmarket complex during the 2011 Australian Easter Broodmare Sale … right around the time a Lion Hunter mare, Buchanan Girl, was going through the ring.

“I was just at the complex for a look and had no real intention of buying that mare, or any other for that matter, but she was such a lovely type…I got her for $800,” Basson explains.

Although Buchanan Girl was ‘empty’ at the time, she had produced two foals – both by Choisir – which were unraced.

Since that fateful coffee break however, the Choisir’s have won 10 races between them.

Basson decided to send Buchanan Girl to All American, producing a grey filly, who would sadly be struck by lightning and was killed.

Having liked – albeit briefly – what she saw with the filly, Basson determined to send Buchanan Girl back to All American in the spring of 2013 (advertised fee: $16,500) and this time ended up with Dark Dream.

“What are the chances of getting hit by a direct strike of lightning?,” Basson mused. “Probably about the same chances of winning a Derby!”

Basson, who owns a 40 acre property in NSW’s Southern Highlands, would send Dark Dream to be trained by Parker at Kembla Grange, south of Sydney.

Parker has about a dozen in work, including Dreamscape 6YO Red Dream – the first horse Basson bred – and the winner of three on end in April and May before finishing fourth in the Stayers Cup at Randwick on Saturday.

With a family background in horses, Parker worked for trainer, Les Bridge, at Randwick for a number of years, riding work and strapping many a top notch galloper including triple Group One winner, Drawn, and Melbourne Cup winner, Kensei.

Taking out his trainers’ license in the early 1990s, Parker has saddled up black type winners Gold Sovereign (who won the 1994 Group Two AJC St Leger and provided the trainer with his sole Melbourne Cup runner), Don Raphael, Brilliant Light and Aliyana Tilde, but Dark Dream is Parker’s first Group One winner.

“He (Dark Dream) showed a ton of ability from very early on and it was at only his second start (in December 2017) that we decided to aim him at the Derby,” Parker points out.

“It was also around that time that Mary Jane started getting some really good offers to buy the horse, including a massive bid of $2 million after the Rough Habit.

“Dark Dream is now heading to the spelling paddock for a rest and it will be a chance to give my head a rest too,” clearly alluding to the enormous pressure both owner and stable have been under.

As for Basson, she is only looking forward and doesn’t regret turning down the big money overtures: “he (Dark Dream) is my unicorn. How often do you end up with a Derby winner?”

Basson, naturally enough, will be counting the days to spring and has big – yes – dreams of further Group One glory.

“(Jockey) Tim Clark said on Saturday that the horse could have easily run out another 200m if the race had of been over the traditional Derby distance of 2400m, so a race like the ($3.1 million) Caulfield Cup (20 October) is worth considering,” Basson enthused.

“I never push my horses and you’re never likely to see my name down as breeding a Golden Slipper winner. As Bart Cummings said, ‘patience is the cheapest thing in racing’ and Kerry didn’t rush Dark Dream at all.

“However, don’t be surprised if you one day see Dark Dream going around in a Melbourne Cup, which would be a pretty big effort for a horse out of an $800 mare!”

HOOFNOTE: The Queensland Derby victory was similarly a dream result for Eddie Rigg who only recently purchased All American for his Geisel Park property in Western Australia.

(Indeed, it was a big couple of hours for Rigg who is also part-owner of Saturday’s Listed Beaufine Stakes winner Mr Motown).

All American stood at Geisel Park in 2016 before moving to Victoria last spring, but the Red Ransom stallion will now return and take up permanent residence in WA.

Dark Dream is one of five stakes winners for All American, including the dual Group One winning filly, Yankee Rose, and he will stand for $7,700 inc. GST this season.

Not surprisingly, one of his customers this spring will be Buchanan Girl (currently in foal to Shamus Award) who is already filling a paddock at Geisel Park.