And She Just Went Zoom… 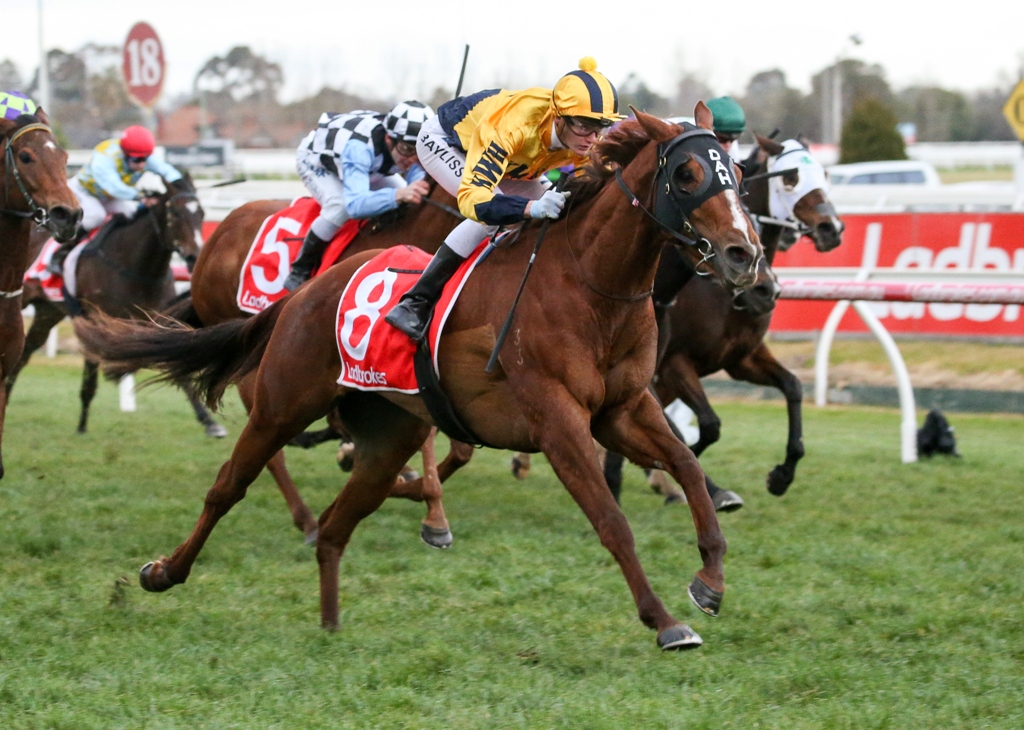 Well, that didn’t take very long! Just on two months ago, the stakes winning mare, Ellicazoom, was knocked down to Mick Malone’s Kitchwin Hills for $420,000 at the Perth Magic Millions Winter Sale: a record price for a horse sold at public auction in Western Australia.

On Saturday, racing for the first time in the Kitchwin Hills silks, Ellicazoom went zoom-zoom in the Group Three Ladbrokes Cockram Stakes over 1200m at Caulfield, scoring by two lengths plus change in a barnstorming finish.

It was manna from heaven for Malone whose Kitchwin Hills – like so many NSW farms – is feeling the devastating effects of the drought.

And while the $90,000 first prize still falls short of the figure paid in Perth, the broodmare residual alone from Group success in Melbourne is incalculable.

Amazingly, particularly given the authority of the victory, it was the first time back in the winners’ stall for Ellicazoom since capturing the Listed Burgess Queen Stakes over 1400m at Ascot in November 2016. Since then however, the now 5YO Testa Rossa mare has been runnerup in the Angus Armanasco Stakes at Caulfield, Flemington’s AV Kewney Stakes and WA Guineas – all at Group Two level – plus a second in the Group Three WA Champion Stakes.

Originally sourced for $180,000 from the 2015 Gold Coast Magic Millions Yearling Sale by leading WA trainer, Neville Parnham, Ellicazoom has raced on 18 occasions for three wins, six placings and $426,574 in stakes.

“I just love the Testa Rossa mares, while she is one of four winners, from as to many to race, from the Group One winner, Ellicorsam,” Malone enthused.

“A lot of mares like her were hard to buy at the National Broodmare Sale in Queensland earlier that month and so we were really happy to get her.

“I had seen Ellicazoom race in Melbourne so I was familiar with her as a type, but Grant Burns from Magic Millions couldn’t have been more helpful sending across videos and a lot of information on the mare.

“Neville (Parnham) was terrific as well … he wanted to keep training the mare and definitely thought we should keep her in work. He mentioned a couple of issues we needed to keep an eye out for and provided plenty of insight for (new trainers) Lindsay Park (Racing).”

One of the most popular farms in the Hunter Valley, Kitchwin Hills has been in operation for over 20 years and produced a host of stakes winners including last month’s Group Two Missile Stakes hero, Pierata.

“We (Kitchwin Hills) don’t race many ourselves and usually only have two or three going around in our colours, while we race half a dozen or so in partnership with clients,” Malone reveals. “This spring we’ll have about 120 to foal down with a further 60 or so dry mares. Ironically, even with the drought, we’ve got more on farm than previous years.”

The Cockram win has Malone weighing up his options as to whether Ellicazoom will join the other Kitchwin Hill mares this spring.

“She (Ellicazoom) is actually booked to Snitzel but it’s a bit ‘wait and see’,” Malone adds. “If she hadn’t run very well on Saturday or just fallen over the line, she’d probably already been heading her way home to the Hunter.

“However, we’re likely to give her another run in the (Group Three) How Now Stakes in two weeks, which is also over the 1200m at Caulfield, while the (Group One) Sir Rupert Clarke Stakes is on that day as well. I think she’s far better suited over the 1200m than the Rupert Clarke’s 1400m, but who knows? It’s just great to have got that Group Three on Saturday.”

Ellicazoom is one of 63 stakes winners for Testa Rossa who has been withdrawn from general stallion duties and is only available for shareholders and private mares at Vinery Stud from this season.

“What a remarkable stallion he’s been,” Vinery Stud’s Drew Irwin points out. “Well over 700 winners at a strike rate of near 75% winners to runners and those runners have included Group One winners Ortensia, Rostova, Testafiable and Enzo’s Lad. Importantly, where Kitchwin Hills is concerned, he is an emerging broodmare sire too with his daughters producing the likes of dual Group One winner Global Glamour, Marky Mark, Disposition and Snippets Land.

“He’s bound to continue leaving his mark for quite some time to come.”