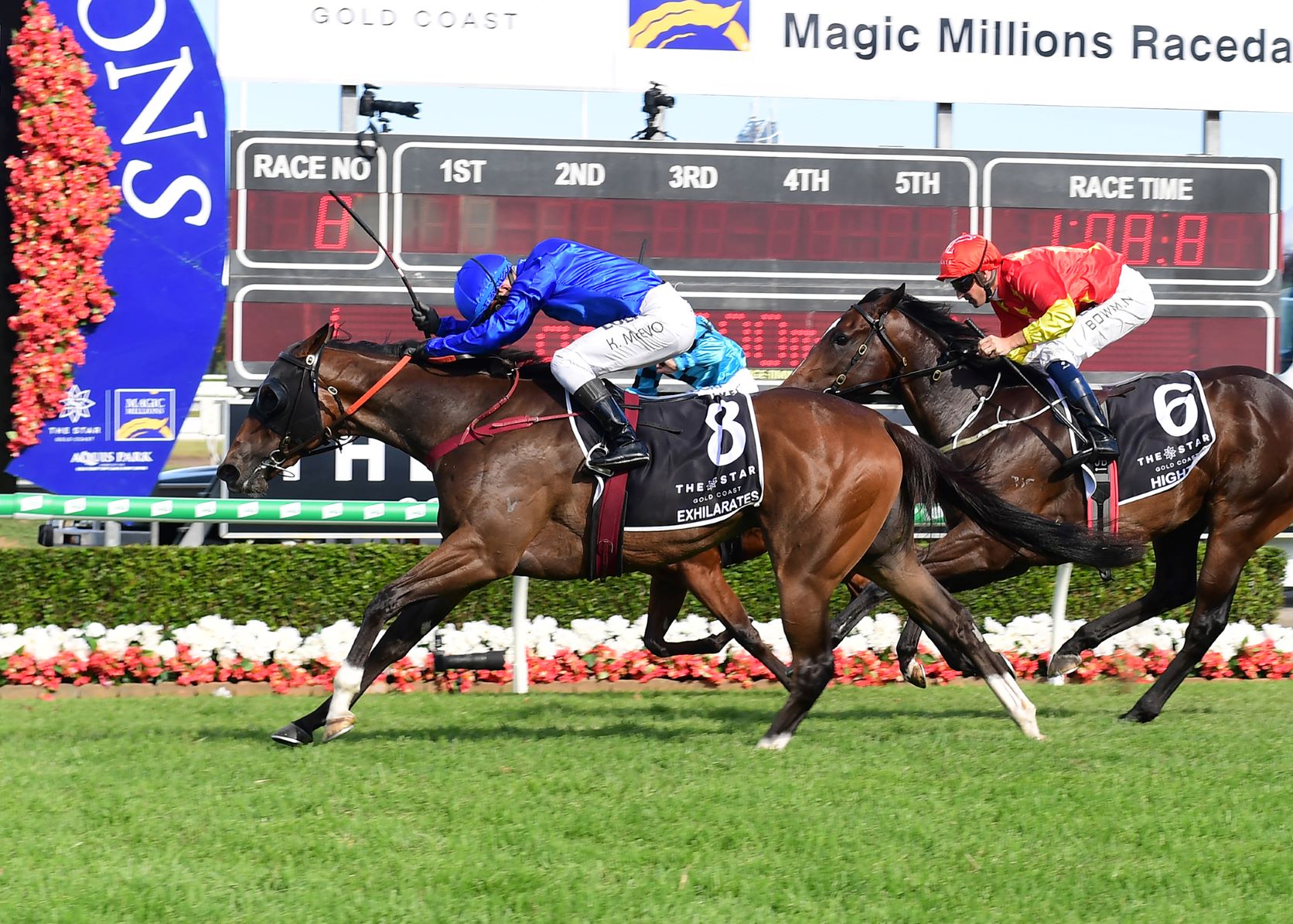 Hands up those who enjoy their annual performance review?

Yep, that’s what we thought.

However, for Godolphin Australia’s Managing Director, Vin Cox, it’s been a VERY good year. Exhilarating even.

Cox shifted to Godolphin in 2018 after eight years at the helm of Magic Millions and, since then, Sheikh Mohammed bin Rashid Al Maktoum’s racing empire has won over 30 Group One races worldwide, including the 2018 Melbourne Cup with Cross Counter (after 30 years of trying!).

Now, while Cross Counter is trained overseas by Charlie Appleby, Godolphin has enjoyed Group One success in Australia in 2018 via Alizee, Impending, Kementari, Best of Days and Hartnell which falls directly under Cox’s bailiwick.

Cox was likewise integral to Godolphin’s decision to re-enter the Australian yearling sale market in 2018, after a nearly 10 year break, buying up some 20 youngsters … eight of those from last January’s Gold Coast Magic Millions.

Fortuitously, one of those eight is called Exhilarates and, on Saturday, the $600,000 yearling purchase won the $2 million Magic Millions 2YO Classic at the Gold Coast – much to the delight of Team Royal Blue.

According to Cox, Godolphin Australia has some 350 gallopers of racing age – approximately 150 two year olds – and breeds around 100 to 150 foals annually.

So why, after such a long absence, did Godolphin Australia return to the yearling sale fray?

“When I was first appointed to the role, I met with other Godolphin managers throughout the world and we were asked our thoughts on moving the organisation forward,” Cox explains. “I proposed that we needed to get ourselves back into the purchasing of yearlings, both to broaden our pedigree base and, as our breeding operation, Darley, is the biggest farm in Australia, it was to also support those that support us.

“Fortunately, they took up my suggestion and Exhilarates is the happy result.

“We’re also getting back good reports on our other 2018 yearling purchases so it promises to be an interesting 12 months.”

Typically, Godolphin didn’t take long to give some of its winnings back, purchasing the first seven figure lot of the Saturday night session: $1,000,000 for the Medaglia d’Oro colt from Group One Blue Diamond Stakes winner, Miracles of Life, which was consigned by Coolmore Australia. All up Godolphin purchased five lots at the sale for $2,925,000.

Meanwhile, Exhilarates is the second foal of Champion Female Sprinter, Samaready, and was bred by some industry heavy hitters in Greg Perry, Echo Beach Bloodstock, Hybrook Pastoral, Encompass International and Werrett Bloodstock before being consigned, via the Vinery Stud draft, to the Gold Coast Yearling Sale last year.

A More Than Ready mare, Samaready herself was withdrawn from the 2011 Magic Millions January Yearling Sale before going through the Inglis Australian Easter Yearling Sale ring where she was knocked down for $150,000.

“She (Samaready) was bred by Gerry Harvey but had hurt herself during the Magic Millions prep,” Vinery Stud’s Adam White reveals. “Gerry then decided to put her through at Easter and asked Vinery to sell her on his behalf. Both Peter (Orton) and I loved her, as did the Vinery partners who ended up buying her. We certainly had a lot of fun with her.”

A half sister to Group Two winning 2YO, Night War and closely related to 3-time Group One winner County Tyrone, Samaready turned out to be the pride of the fleet, winning the Group One Blue Diamond at two, the Group One AJ Moir Stakes, three other Group races, and ran placings in two Group Ones – the Golden Slipper and Lightning Stakes.

Frustratingly, Samaready hasn’t been in foal since but is only a relatively young mare – nine years old – and, in light of her only runner to date, no stone is being left unturned to get her back in the groove.

HOOFNOTE: The $2 million Magic Millions 2YO Classic was a much welcomed and somewhat emotional result too for Godolphin Australia’s head-trainer, James Cummings, who had his first runner in the sales-related race.

A fourth generation trainer, Cummings’ grandfather – the legendary Bart – won the race with Mimi Lebrock in 2007 and pulled off a quinella in 1989 via Malibu Magic and Tristanagh.