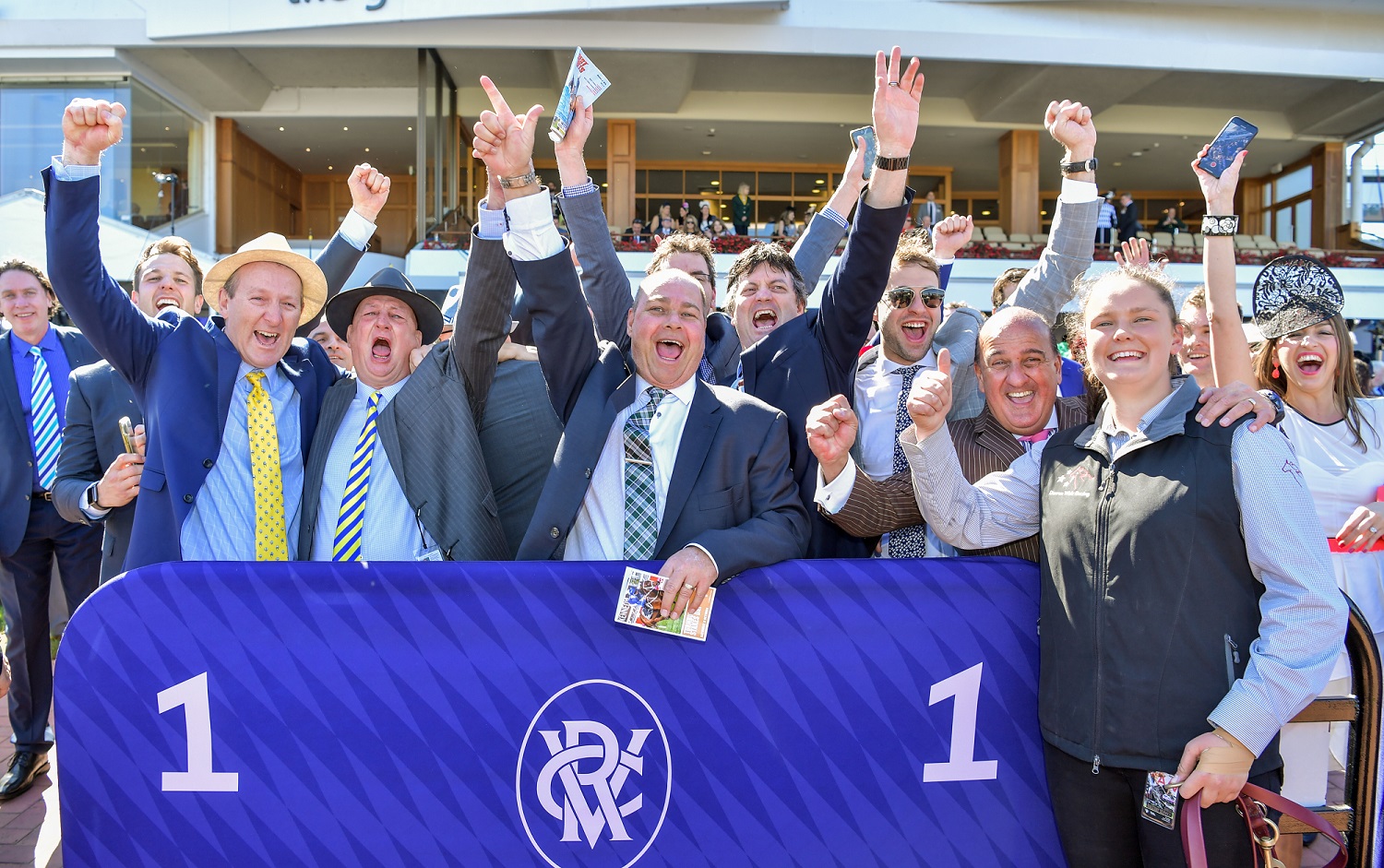 It would hardly have come as any great surprise if leading trainer, Darren Weir, woke up with a massive earache on Sunday morning.

The decibel levels from happy owners were at a pretty high pitch at Flemington after Weir won both the Listed UCI Stakes with Extra Brut and Group Two TAB Edward Manifold Stakes via Amphitrite: both for large syndicates.

Indeed, Weir could hardly be heard over the din as shareholders welcomed the returning hero, Extra Brut, after the 3YO colt got home in a nail biter over the 1800m.

“That’s what I love about racing,” Weir enthused, referring to the cheering mass directly behind him. “Whether you’ve got 1% or 100% it’s just an unbelievable feeling.”

The 18th stakes winner for Aquis Farm based Domesday, Extra Brut was having just his fourth career start, running second on debut at Geelong in August before peeling off successive victories at Sandown and Caulfield.

The colt is now likely to head to the Group Three Caulfield Classic over 2000m in two weeks and, if successful, a possible tilt at the $2 million Group One AAMI Victoria Derby over 2500m at Flemington on 3 November.

Originally offered by Stonehouse Thoroughbreds as a weanling at the 2016 Inglis Great Southern where he would be snapped up by Gary Mudgway for $52,000, Extra Brut was then pinhooked to the 2017 Inglis Sydney Classic Yearling Sale: knocked down to Brad Spicer Thoroughbreds for $100,000.

Spicer has purchased a number of outstanding gallopers over the years – Starspangledbanner, Awesome Rock and Commanding Jewel among them – and is one of the nation’s leading syndicators, but the rise of Extra Brut is especially close to the heart.

“There are about 30 in the syndicate, but that number swells considerably when you add in partners and friends,” Spicer points out. “The thing is with this colt, the vast majority in the group are family and mates so that makes it pretty special.

“Even better still, about 20% of the syndicate is made up of first time owners and it looks like they’ve managed to get into a pretty good colt with their first crack.”

Currently in England to attend sales, Spicer actually missed the Flemington race: “I disembarked from the plane about 10 minutes after the race and had to watch the replay … it certainly looks like they celebrated in style.

“When I saw Extra Brut for the first time at the sales, he just had so much presence about him and was a really good walker: a bit leggy and I knew he’d probably take some time and was more likely a Derby horse.

“He was the equal most expensive Domesday sold that year but people like David Hayes and Darren Weir were the underbidders and, in fact, Darren’s crew came up to me straight after and said they’d be keen to train the horse.

“Darren has had an opinion of the colt since very early on and he trialled well, but that first win of his at Sandown was against a handy field and I thought then he might go on with it. He’s definitely exceeded expectations and I can only hope he continues to do so.”

It’s little wonder as to how Extra Brut got his name … the UCI winner is out of 4-time winning Redoute’s Choice mare, Dom Perion, who is also the dam of the Jamie Edwards trained mare, Fill The Flute.

Interestingly, Fill The Flute won at Moonee Valley on Friday night, less than 24 hours prior to Extra Brut’s Flemington victory, having previously won at Morphettville on 22 September, about two hours after Extra Brut had scored at Caulfield.

It gets even more intriguing according to Andrew McDonald, who bred Extra Brut at his 44-acre Springfield Park near Shepparton in Victoria.

“When I purchased Dom Perion at the (June 2015) Inglis Great Southern (for $6,000!) she was in foal to Domesday and would go on to produce Extra Brut in the September,” McDonald reveals. “The day before at the sale, Jamie Edwards bought Dom Perion’s Statue of Liberty weanling filly for $7,000. That turned out to be Fill The Flute (4 wins from 8 starts).”

One of just six mares at Springfield Park, Dom Perion slipped in successive years after foaling down Extra Brut, but last month produced a full brother, much to the delight of McDonald.

“She (Dom Perion) is going to Toronado this spring but Extra Brut’s full brother will definitely be heading to a sale!”