Putting The Ab Fab Into Fabergino 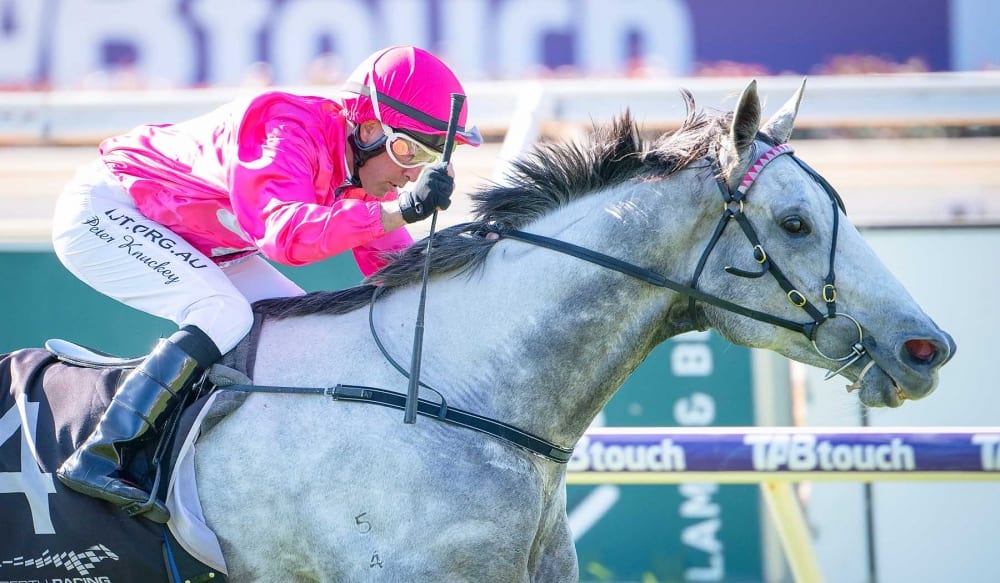 Let’s face it, you don’t have to search too far for passionate racehorse owners.

However, few would be more ‘ardent’ than the connections of West Australian wonder mare, Fabergino.

On Saturday at Ascot, the 5YO really put the fab into her performance with a blistering display in the Group Three Northam Mazda Stakes over 1100m, winning by three lengths. And the thing is, the margin could have been much greater if jockey, Peter Knuckey, hadn’t chosen to ease Fabergino down over the closing stages. As one pundit observed, “it made comfortable viewing for punters who took the $1.30”.

It was Fabergino’s 12th start, from which she has won nine, with two further placings, for $504,800 in prizemoney. Notably, her last four outings have been at stakes level, for four straight wins.

Fabergino was bred by Jim Anderson, who races the massive – 17.1 hands – grey with close mates, John Beesley, Marty Mcdonagh and John Tierney: the latter pair based at Liverpool in England.

“We’ve all known each other a long time,” says Anderson, who somewhat betrays his own roots by also racing the stakes placed, Cockney Crew. “Marty and John have flown out to watch Fabergino in six of her starts and then usually hop back on the plane to England the next day.

“They had to watch the race via a streaming service on Saturday, but it was a huge boost for them as they are all doing it pretty tough in England with the coronavirus. They were absolutely thrilled when she won the Northam.”

Trained at Bennett Springs by Tiarnna Robertson, there were some concerns as to how Fabergino would handle the 1100m of the Northam, given her only unplaced run was at 1200m and seven of the eight prior wins had been over 1000m. Those concerns took just 1:02.56 to be put to bed on Saturday.

“Fabergino showed a lot of ability from the very start, but she’s such a big girl and has had a few issues as a consequence,” Robertson points out. “We’ve really taken our time with her and she just keeps getting better. There was always a question mark as she’s been dubbed a 1000m horse, so to see her do that against those sort of horses is fantastic.”

Eastern race fans caught a brief glimpse of the flashy grey in February when Team Fabergino made the trip across the Nullabor (and from Liverpool!) for the Listed ATA Bob Hoysted Stakes over 1000m at Flemington, where she again led throughout.

According to Anderson, they’re all very keen to repeat the dose.

“They looked after us tremendously in Melbourne and we’ve earmarked the Group One AJ Moir Stakes – over 1000m – at Moonee Valley in September,” Anderson reveals. “Fabergino has been tipped out into her favourite paddock for a couple of weeks as there’s not that many opportunities for her in Perth at the moment. We’ll make a firm decision as to where she goes next after she’s returned to the stable.

“What’s most encouraging though is that she’s really starting to settle a lot more in her races and Peter (Knuckey) believes she’ll handle 1200m now, which definitely gives us options in races like the (Group One) Winterbottom Stakes.”

The best performer for three generations, Fabergino is from the 4-time winning Danzero mare, Miss Razyana, and hails from the family of Group One winner Camino Rose.

A Group winner of seven races in Perth, Maschino is by the highly influential Encosta de Lago (115 stakes winners) and stands at the Andrew family’s Alwyn Park at Serpentine.

“He (Maschino) has a tremendous pedigree and is out of the 3-time stakes winner, Tahni Girl, but had a fairly quiet time in his first couple of seasons at stud,” Anderson explains. “As a matter of fact, Maschino had just the 12 foals from his first crop, of which Fabergino is one, but there’s also the multiple winners Fa’lion Maschine, Scooter’s Machine and Mirisistable.

“Overall he’s had just the 35 to race, while aside from Fabergino, his stakes winners include Cup Night, Snowchino and Lonsdale Lady, along with stakes horses Cockney Crew and Criminal Code. In the last two months his progeny have run in 10 stakes races for three wins and three placings.

“Last time I looked, Maschino has 17% stakes horses to runners and people are starting to take plenty of notice with his yearlings selling up to $160,000 at the Perth Magic Millions in February.

“I’m thinking that they’ll start to take even more notice if Fabergino were to win the Moir!”