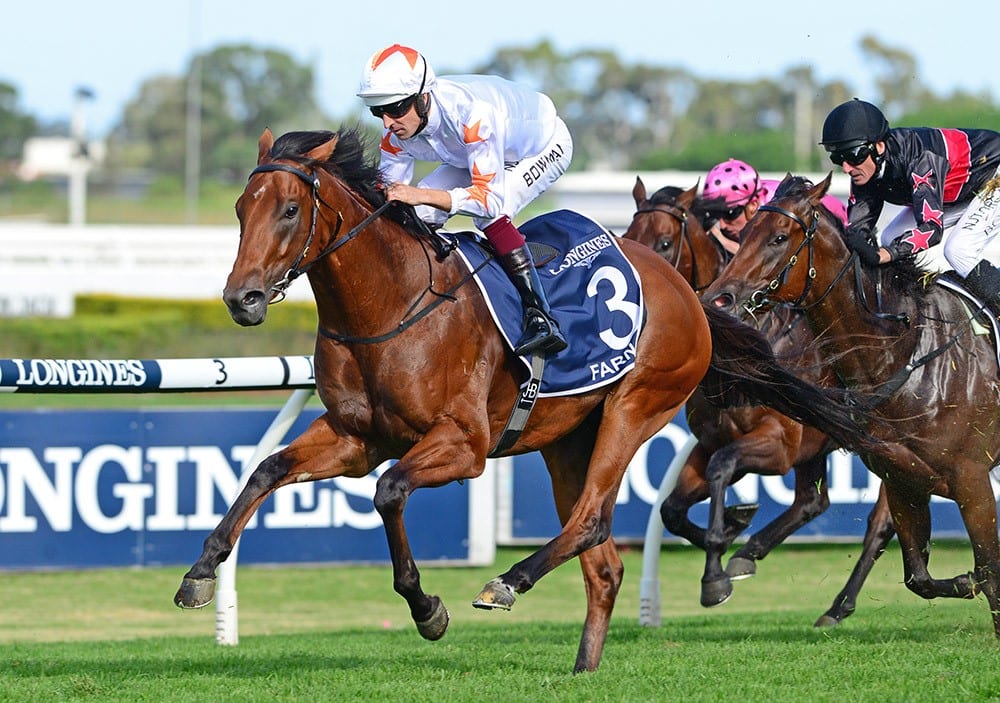 It was a memorable Golden Slipper to say the very least.

The power packed display from exciting colt, Farnan, would result in the seventh win in the race for Gai Waterhouse; the first for her co-trainer, Adrian Bott; and a maiden success for champion jockey, Hugh Bowman.

However, the 2020 $3.5 million Group One Longines Golden Slipper Stakes – the world’s richest race for 2YOs – was just as much about the people who were not at Rosehill Gardens on Saturday.

With the racecourse closed to all but stable/track staff and media due to coronavirus, the rest of us had to be remote with the remote.

That’s history making in itself.

Rest assured though, cheers were ‘heard’ around the world as Farnan – the deserved favourite – produced a blinder to add a Golden Slipper to a resume which already includes a Group Two Silver Slipper and Group Two Todman Stakes. All up … five wins from six starts and a tick over $2.5 million in stakes.

Notably, Farnan is owned jointly by Aquis Farm and Phoenix Thoroughbred, again illustrating the depth of international investment in the Australian thoroughbred industry.

(Aquis Farm, owned by the Hong Kong based Fung family, also shares ownership – with Amer Abdulaziz’s Phoenix – in Prague, while Rathlin and Global Quest [scratched from the Slipper on Friday] both race in the Aquis silks. Magic Millions 2YO Classic winner, Away Game, is part-owned by the Mrs Loretta Fung, Dame Giselle is owned by China Horse Club and Sir Owen Glenn’s Go Bloodstock, Hanseatic and Thermosphere are raced by Godolphin, Personal by Coolmore, Muntaseera by Sheikh Mohammad bin Khalifa Al Maktoum and Minhaaj by Shadwell Stud, while Mr Zhang’s Yulong Investments races Hungry Heart and recently purchased a share in Blue Diamond winner Tagaloa).

“For Aquis, it’s all about the partnerships,” Aquis Farm Managing Director, Shane McGrath enthused. “We purchased eight colts and a filly with Phoenix last year and we’re just fortunate to have an owner in Tony Fung who is prepared to back his investment in Australian racing and breeding.

“Look, everyone turns around and says ‘go out and buy me a Golden Slipper winner’ but normally that’s just the stuff of dreams.

“To actually get first and second in the race with Farnan and Away Game … well, it’s just incredible.

“There’s no other place in the world like Australia where you can go out and buy quality colts at affordable prices and then end up running 1-2 in the world’s richest 2YO race. It just doesn’t happen.”

Bred by Phoenix Thoroughbred, Farnan is a son of the immensely successful stallion, Not A Single Doubt (69 stakes winners) from the Group winning Street Cry mare, Tallow, whose other runners include dual stakes winner Sandbar.

Sold by Vinery Stud on Phoenix’s behalf, Farnan was knocked down for $550,000 at the 2019 Gold Coast Magic Millions Yearling Sale.

“It simply made good sense for us to go into partnership with Phoenix on such a well-related colt, just as it was with (Group Three) Canonbury Stakes and (Group Three) Pago Pago Stakes winner, Prague,” McGrath explains. “Given the success of Golden Slipper winners at stud, Farnan appears to be a natural successor to Not A Single Doubt who was retired from stallion duties earlier this year.

“I had to confess to the boss that I was pulling on Away Game’s tail as she loomed over the concluding stages, but let’s face it, both gallopers are terrific 2YOs.

“Hugh Bowman reckons Farnan is the best 2YO he’s ever ridden and the best he’s climbed on since Winx. That’s a pretty good wrap for a Golden Slipper winning colt!”

With properties in Queensland, NSW and Victoria, Aquis Farm has shares in 150 racehorses and some 200 broodmares, but to McGrath the Slipper success on Saturday is all about the future.

“It speaks volumes for our development program … each of our current crop of 2YOs have gone through the ‘system’ and this season we’ve won the Magic Millions 2YO Classic and Widden Stud with Away Game, the Canonbury and Pago Pago (Prague), the Breeders’ Plate (Global Quest), the Silver Slipper and Todman,” McGrath adds.

“Ten years ago, no-one had heard the name Aquis and now we’ve come out and run the quinella in the Golden Slipper. An incredible thrill!”

On Friday night at Moonee Valley, Phoenix’s brilliant I Am Invincible filly, Loving Gaby, added to the honour roll with a resounding victory in the Group One Keogh Homes William Reid Stakes over 1200m.

From 12 outings, Loving Gaby has competed in nine Group Ones, winning two (Manikato and William Reid), finishing second in four (Sires’ Produce, Champagne, VRC Classic and Newmarket), third in the Lightning and fourth in the Golden Slipper. The $500,000 yearling investment has since won $2,281,250.

In an important weekend of racing, Phoenix would have five Group One contenders – Loving Gaby and Exceedance (William Reid), Farnan and Prague (Golden Slipper) and Reloaded, who would finish third in the Rosehill Guineas.