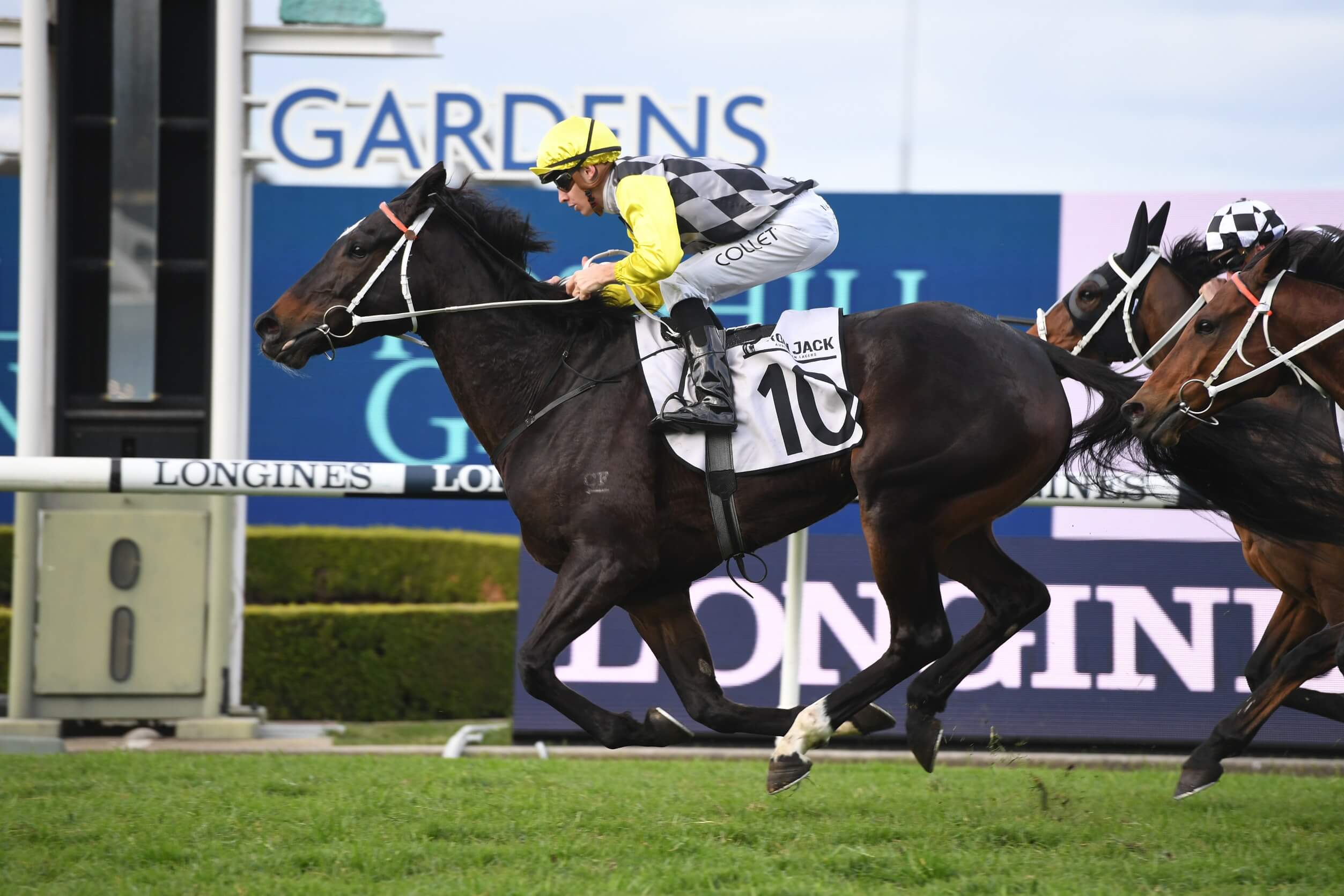 Awesome? Well, that’s probably for others to judge, but the stakes success of Frankely Awesome in Saturday’s Listed Iron Jack WJ McKell Stakes over 2000m at Rosehill Gardens was certainly impressive: both in terms of performance and patience.

Yet another black type winner to be added to the ever expanding honour roll at the Hunter Valley’s Cressfield Stud, Frankely Awesome has clearly had her ups and downs.

Bred and raced by Cressfield, Frankely Awesome is a daughter of sire sensation, Frankel, from an outstanding family and was, originally, expected to be sold at a yearling sale.

“That was the plan, but she injured herself severely as a weanling and we were told at one stage that she would probably never race,” Cressfield’s General Manager, Wayne Bedggood, recalls. “She definitely wasn’t sales material given the x-rays from her injury.”

A setback to be sure, but given the filly’s breeding, far from total devastation.

Established by Bruce Neill and including 1200 acres of prime thoroughbred real estate, Cressfield has bred and raised Group One winners, Clearly Innocent and Onemorenomore, while other Group winners include Missrock, Headwater, Lilliburlero, Egyptian Symbol, Satin Shoes and Star Rolling.

Despite the sale woes, Frankely Awesome would win her first two races as a spring 3YO and, during her autumn campaign, showed she was among the cream of the crop with a Group Three Kembla Classic second, Group One Vinery Stud Stakes second and Group One Australian Oaks third in successive starts.

“Frankely Awesome has had several issues since the Oaks that (trainer) Kris Lees and his team have had to work around and it’s a real coup for them to get her back to winning form,” Bedggood points out. “Full credit to my crew at Cressfield too who have spent a lot of time working on the mare before sending her back to Kris.”

After three runs this time in, Bedggood was confident of a forward showing in the McKell.

“Kris was happy with her work and none of her prior issues appeared to be troubling her,” Bedggood adds, “and when she finished off so well at Rosehill two weeks ago, I thought she would be right in it on Saturday. The $36 I took was an absolute gift!”

With 35 mares on farm, Cressfield sells around 20-25 yearlings annually, usually split between the Gold Coast Magic Millions and Inglis Easter.

And it’s been another remarkable sales year for Cressfield with its Exceed And Excel colt – the second foal of dual Group One winner, Platelet – bringing the second highest price at January’s Magic Millions Yearling Sale, when knocked down to Hawkes Racing for $1.8 million. What’s more, three of the stud’s youngsters brought $500,000 apiece at Inglis Easter’s first round in April – the first major sale to be conducted entirely on a digital platform.

“The number of mares on farm tends to fluctuate with a few close to retirement,” Bedggood reveals. “However, with 15 racehorses – many of them mares and including Frankely Awesome – we’ll have plenty on hand to replace the ‘retirees’.”

There are no plans to retire Frankely Awesome any time soon though and a tilt at the Listed Grafton Cup on 9 July is definitely on the radar.

“The boss and I were discussing her impending breeding career and think it has probably been pushed back a year now … we would love to get that elusive Group One on her page,” Bedggood muses.

One of six Frankels bred to southern hemisphere time by Cressfield, Frankely Awesome is from the Street Cry mare, Street Secret, a stakes winner at Belmont who would also post black type placings in France, Germany and North America.

Immaculately bred, Street Secret is the best runner for Canadian stakes horse, Always Awesome, while her granddam, Anzille is a half sister to Champion Filly, Urban Sea, in turn the dam of Horse of the Year, Sea The Stars and sire immortal, Galileo.

The well ‘travelled’ Street Secret was sold as a yearling for $100,000 in the United States … knocked down for 48,000 guineas in England three years later … sold later that year in France for €260,000 … before then finding her way back to North America where she was purchased by James Bester for $535,000 on behalf of Cressfield.

Remaining north of the equator, Street Secret was covered by Frankel, with the end result being Frankely Awesome.

Cressfield would, however, keep Street Secret for just the two seasons.

“The plan was a commercial one where mares were bought to go in foal to Frankel, with the resultant foal sold as a yearling before the mare was then on-sold, in foal to a commercial sire,” Bedggood reveals. “In retrospect we would have liked this mare to remain in our broodmare band, but at least now we do have a Frankel daughter who is a black type winner and twice Group One placed …”

In foal to Snitzel, Street Secret would be purchased by Paul Moroney – on behalf of Sir Owen Glenn’s Go Bloodstock – for $680,000 at the 2017 Inglis Chairman’s Sale.

Producing a filly, the rising 3YO has been named Maternal Gift.

“She (Maternal Gift) is like her half sister and was never going to be an early 2YO,” Go Bloodstock’s Steven O’Connor advises. “She’s a lovely type though and we’re really looking forward to her first campaign. Especially after Saturday’s result!

“Unfortunately, she missed to Criterion the following season and the year after that, her Merchant Navy was born dead. Thankfully she’s back in foal to Snitzel and due in September, while we’ll likely send Street Secret to Pierro this spring.”

Cressfield will offer just the sole lot at the 100-strong Round 2 of Easter, which gets underway – with a LIVE audience – at Inglis’ Riverside Stables from 10am on Sunday (5 July). Fittingly, the Cressfield entry is a filly – the first foal of multiple stakes winning Pivotal mare, Rosental and yes, she’s by Frankel.

Although foaled in Britain, Rosental is a granddaughter of Danehill’s Group winning 2YO, Mannington, the dam of Group One Victoria Derby winner and sire, Benicio.

“It’s going to be wonderful to be able to attend a sale in person again, especially as it’s combined with the Scone sale (156 yearlings),” Bedgood adds. “The online format has worked remarkably well, but there is nothing like actually being there and being able to inspect the yearlings on the complex.”

The Cressfield filly is among six Frankels to be offered on Sunday, while Easter 2 also features eight I Am Invincibles, six by Exceed And Excel, five American Pharoahs, three Fastnet Rocks, eight by Snitzel, five Pierros and five youngsters by Written Tycoon.

Not surprisingly, Beddgood isn’t the only one looking forward to the more traditional means of thoroughbred commerce.

“We are very much looking forward to the return of live auctions and while there are plenty of challenges, the appetite for the sale from prospective buyers seems encouraging,” Inglis General Manager, Bloodstock Sales & Marketing, Sebastian Hutch, enthused. “It is a somewhat unique opportunity to buy an Easter quality yearling in July.

“The likes of Quick Thinker, who was purchased for $100,000 and Nettoyer ($20,000) were both sold at Easter and are further examples of the class of horse that can be purchased at value prices from the sale.

“Hopefully we are talking about more success stories from this unique session in years to come!”

HOOFNOTE: Inglis announced on Sunday that the Great Southern Weanling Sale – normally conducted at Melbourne’s Oaklands Junction complex – would be switched to the Riverside Stables and conducted on Thursday 9 July … the day after the Australian Weanling Sale.