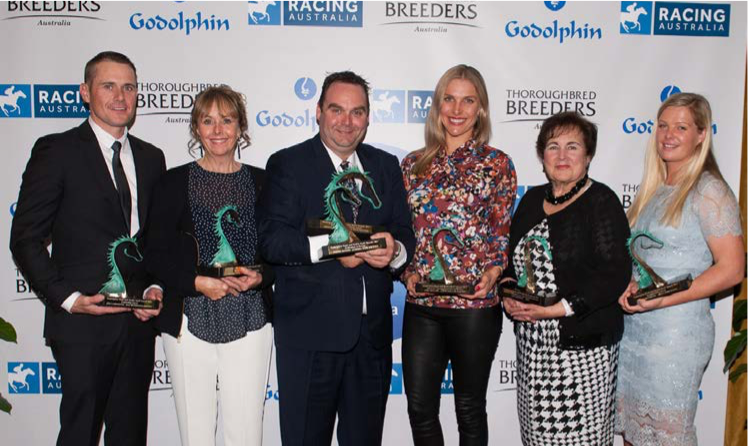 With a host of Group One winners this season, including Black Heart Bart, Palentino and Stratum Star, champion trainer, Darren Weir, is rarely short of a podium finish.

However, it was Weir’s racing manager, Jeremy Rogers, who took centre stage at Eagle Farm on Friday night, accepting the major honour – for ‘Thoroughbred Excellence’ – at the 2017 Godolphin Stud and Stable Staff Awards.

Rogers was also recognised with the ‘Dedication to Racing’ Award, pipping ‘stablemate’, Angela Taylor-Moy, in the final count. Taylor-Moy is the foreperson at Darren Weir Racing, and was one of three to represent the stable with another team player in Lee Purchase runner-up in the ‘Thoroughbred Care and Welfare’ Award.

“It was a tremendous night … one I’ll never forget,” an elated Rogers points out. “I was truly blown away. I didn’t expect to win at all, but to walk away with the top award is a true honour.

“All I ever wanted to do was to be involved in racing and I soon realised that the administrative side of a stud or stable was where I had something to offer,” Rogers said.

“There are so many good people out there who should be recognised, I’m just thrilled to be one of them and to be acknowledged by organisations such as Godolphin, Racing Australia and Thoroughbred Breeders Australia is humbling. I can’t thank them enough.”

Rogers’ recognition is of course no surprise to Weir who described his racing manager as an inspiration to anyone in the industry and broader community.

“Jeremy is the backbone of our racing operation,” Weir enthused. “His role is high pressure with the number of runners we have, but he does it extremely well and has had a huge impact on my business.

“Jeremy was exactly what I needed to help my operation grow. His goal for me when he started was to help me win the Victorian Trainer’s Premiership and we did that within three years. He’s a superstar at his job.”

John Petzer, Chairman of the Awards judging panel, praised Rogers and all nominees.

“Jeremy’s steadfast dedication and unwavering commitment to the management of a very high profile and iconic training establishment, is complemented by a well organised manner and a professional work ethic,” Petzer said.

“When you couple that with his unquestionable desire to improve his own skillset, it made him a very deserving winner of the overall excellence award.

“The judging panel is extremely pleased with the outstanding quality of the nominations received for the Godolphin Stud and Stable Staff Awards for 2017 and, as was the case in previous years, the quality of this year’s nominees was beyond question. The judging panel’s task in determining the ultimate winners in the various categories was not an easy one.”

Now in it’s third year in Australia, the awards that recognise and reward the work done behind racing’s front line, attracted a record number of nominations and revealed rare skills, along with the common themes of loyalty, devotion, and humility throughout the six categories.

The Thoroughbred Excellence Award carried a prize of $5000 with a further $2000 to be distributed among workplace colleagues.

Meanwhile, the five category winners received a prize of $10,000, with a further $3000 to be shared among fellow staff at their employers’ workplace. Each runner-up received $1000.

The full list of winners and runners up are as follows: