Godolphin’s Impending Takes A Bead On The Stradbroke 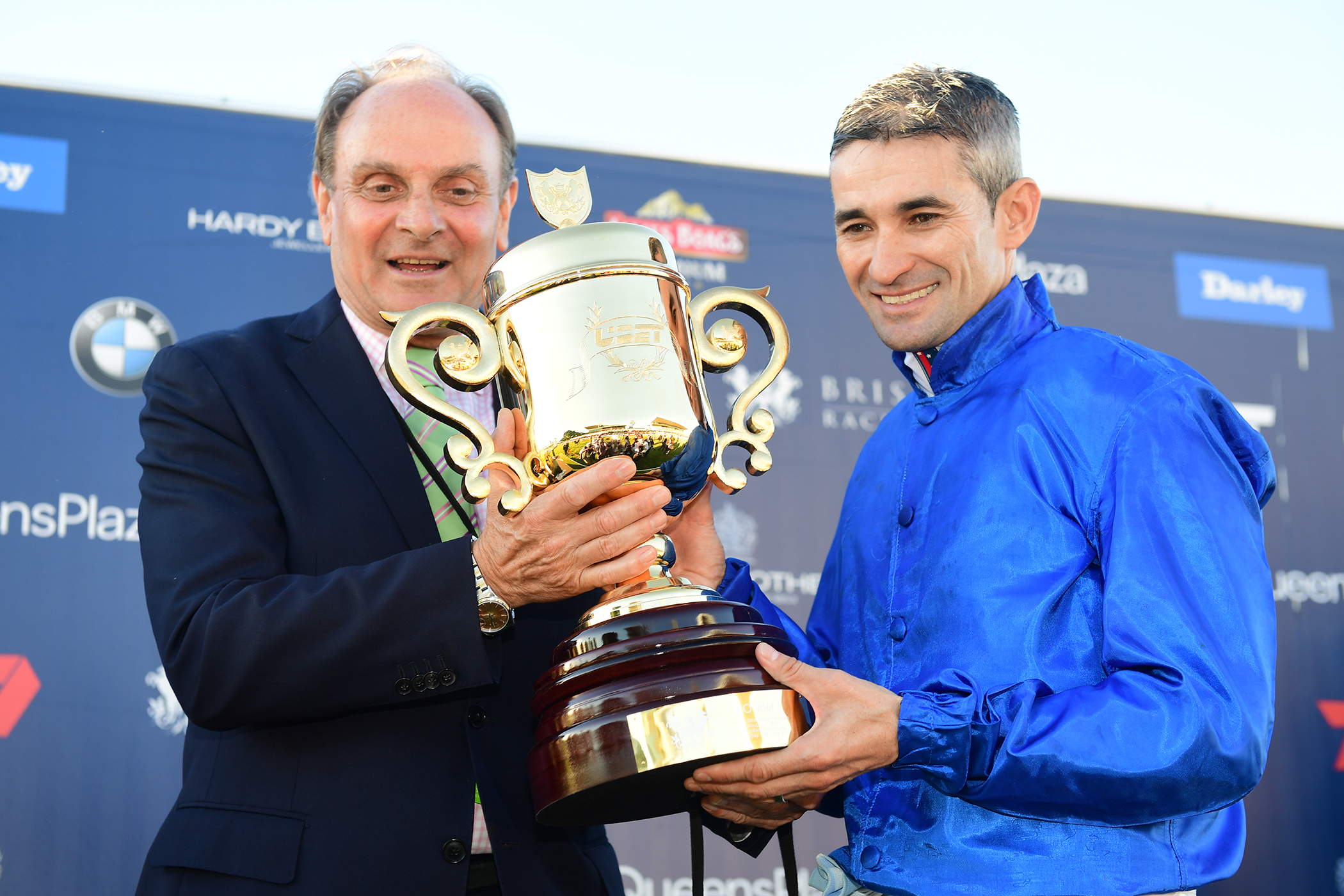 Another slice of history was carved out at Doomben on Saturday with the victory of Impending in the $1.5 million Group One Stradbroke Handicap over 1350m.

While the juggernaut that is Godolphin Racing is no stranger to Group One success, Impending’s win had the added dimension of Darren Beadman’s name appearing as trainer.

One of the most popular jockeys Australia has produced, with 86 Group One victories, Beadman was recording his initial win at the elite level as a trainer.

Unfortunately, Beadman wasn’t on hand to accept the kudos as he had been hospitalised earlier in the week due to a virus.

“Darren is incredibly dedicated and I had to literally order him to stay at home and rest up,” Darley Australia’s Managing Director, Henry Plumptre, explains. “It was a remarkable effort though and somewhat fitting given that of all the major races Darren won throughout his career as a jockey, the Stradbroke wasn’t among them.

“What makes it even more special is that Darren rode Impending’s sire, Lonhro to 10 Group One victories, and he also rode the colt’s mother, Mnemosyne, to her two Group One successes.”

Beadman was installed as Godolphin’s interim head trainer last month following the resignation of John O’Shea and will resume his role as assistant trainer when the recently appointed, James Cummings, takes up the reins in July.

“We’re really looking forward to James coming on board but Darren has done a terrific job,” Plumptre adds. “He (Darren) is an absolute workaholic and used to ride work every morning as a jockey. He has learned from the masters … Bart Cummings, John Hawkes … a lot of that has certainly rubbed off on him.

“The thing to remember is that we’ve had a well worn system at Godolphin all the way through: from John Hawkes to Peter Snowden to John O’Shea. They each brought their own ‘stamp’ of course, but basically it’s a tried and true methodology and it’s important to point out that many of the senior staff have been with us for many years. There’s a lot of intellectual property at work with the Godolphin operation.

“I believe the combination of James (Cummings), who is a rising star in the training ranks, and Darren, with all his experience, should be a great combination.”

Impending’s Stradbroke was the fifth at Group One level for Godolphin this season, following on from Astern (Golden Rose), Hauraki (Epsom), Hartnell (Turnbull) and It’s Somewhat (Doncaster) with 2016/17 ‘takings’ rapidly approaching the $18 million mark.

“We had a very good year (2010/11) with Peter Snowden through horses like Helmet and Sepoy, but it’s certainly been a remarkable season for us and it still has two months to run,” Plumptre points out.

As for Impending, the colt was due to arrive back in Scone on Tuesday with nothing firm in mind as to what he’ll next target.

“He’s probably at his best over 1400m, but there’s not that many Group Ones over that journey, so a decision will have to be made as to whether to drop him back to 1200m or go over something longer. Ultimately, it will be up to James,” Plumptre adds.

Impending’s dam, Mnemoysne, meanwhile has not produced a live foal for the last three seasons and missed to Lonhro last spring.

“She had a few problems with her feet which developed into laminitis and knocked her fertility around quite a bit,” Plumptre reveals. “However, she appears to right again now. The 2YO full sister to Impending, Epidemic, got a bit lost at her last start in the Listed race at Scone, but is showing signs of promise.

“We’ll be sitting down and planning matings for our mares this week, but surely it would make good sense to send Mnemosyne back to Lonhro.”