Golden Weekend In Singapore For Australian-breds 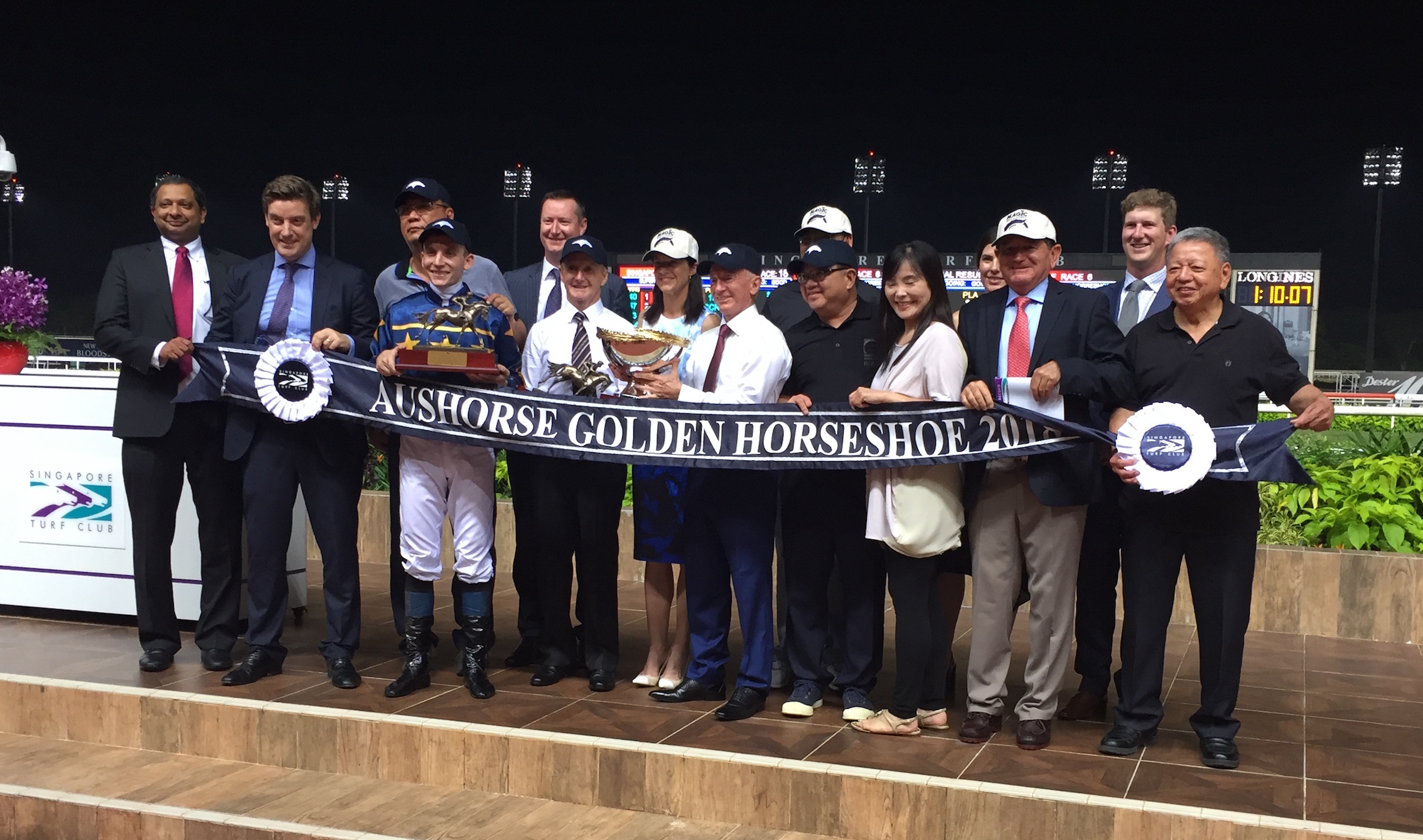 It was an astonishing weekend in Singapore with the first three placings in the S$325,000 Group Two Aushorse Golden Horseshoe Final, along with first and third in the S$1,150,000 Group One Singapore Derby, all being filled by Australian-breds.

And, underscoring the strength of Australian sales, all five were also sold at various Magic Millions auctions.

In a thrilling finish to the Aushorse Golden Horseshoe, Lim’s Lightning was able to hold off Stryker youngster, Galvarino, with the Lee Freedman trained, My Big Boss (by Smart Missile) grabbing third, while Vinery-bred, Jupiter Gold proved too strong in the Derby as Lim’s Magic capped off a remarkable 48 hours for owner, Lim’s Stable, when third.

Undoubtedly the star of the show however is rising star, Lim’s Lightning, who was having just his third start in the Aushorse Golden Horseshoe, having earlier won the third leg of the Horseshoe series – the IRT Juvenile Stakes.

Bred in Queensland by Lynn Tipper, Lim’s Lightning caught the eye of former champion jockey, Mick Dittman, when presented at the 2017 Magic Millions 2YO Horses in Training Sale where he was knocked down for $50,000.

Dittman was purchasing on behalf of Siah Mong Lim, principal of Singapore’s powerful Lim’s Stable and the horse was duly placed with expat Aussie and former top jockey Steven Burridge.

(Riding from the age of 13, Burridge steered home over a 1,000 winners – including Super Impose at his first start and Mighty Avalanche in the 1984 Oakleigh Plate – with numerous stints in South East Asia before taking up training. He commenced operations in Singapore in 2002).

“There was plenty of celebrating on Friday night for Mick and Mr Lim,” an elated Burridge points out. “I’ve got a dozen in work for Mr Lim and it’s tremendous to win big races like the Aushorse Golden Horseshoe for him.”

It was the third Golden Horseshoe victory for Burridge, having earlier won the Final with Lim’s Racer in 2016 and Pitstop in 2012, but the trainer considers Lim’s Lightning to have the greatest potential of the three.

“Since moving to Singapore I’ve had some very good horses like Risky Business, who won a Singapore Gold Cup, and Queen Elizabeth Cup winner King And King when the whole family got to meet the Queen, but Lim’s Lightning could well end up being anything,” Burridge points out. “He pulled up well from Friday night’s run and while we’ll tip him out now, the plan is to bring him back for next year’s 3YO series. The horse appears if he wants to go over a bit further and is shaping up to be an even better 3YO … he could well end up being my best ever galloper.”

It would probably come as no surprise that Burridge is a massive advocate for the Aushorse Golden Horseshoe Series.

“Over the last couple of years they have put the series on a little later and it’s really paid dividends,” Burridge enthused. “They are now getting capacity fields, but even more than that, better quality performers. An absolutely terrific concept and great for Singapore racing.”

Meanwhile, Jupiter Gold – who won two legs of the 2016 Golden Horseshoe Series – had the biggest win of his career by capturing the Singapore Derby on Sunday.

Closely related to globe trotting superstar, Takeover Target, Jupiter Gold was bred at Vinery Stud and is one of 31 stakes winners for its former AP Indy stallion, Congrats.