Goldman Has Eckstein In Winning Mode 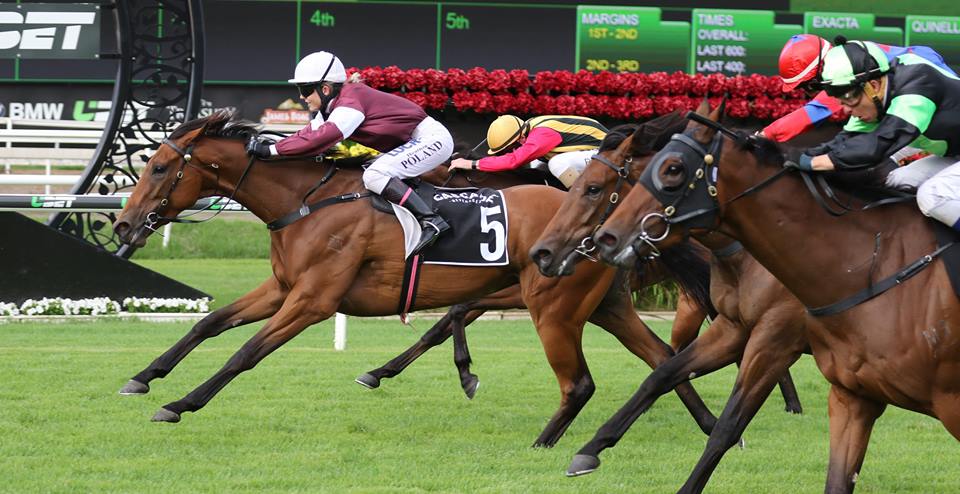 As far as problems go, it’s a good one to have. Trainer, Kurt Goldman, is unsure at this stage as to whether his 3YO filly, Eckstein – winner of Saturday’s Listed Peak Sports & Spine Mode Plate (1200m) at Eagle Farm – will race in the Magic Millions Guineas or the Magic Millions Fillies & Mares on the Gold Coast come 14 January.

One is worth $2 million (Guineas) and the other $1 million plus change, but Goldman is likely to keep his powder dry until after Eckstein’s next start: more than likely in the Group Three Vo Rogue Plate at Eagle Farm on 31 December.

It’s been a big few months for the young trainer who saddled up his first winner in 2011 and only has a relatively small team in work at his Goulburn, NSW base.

“The Vo Rogue (1300m) will be Eckstein’s first time beyond 1200m, but she’s starting to get a lot more settled in her races and I don’t think she’ll have any worries taking it out to the 1400m (Guineas distance),” Goldman points out.

“It was probably a bonus that the Mode Plate was postponed from the previous week because Eckstein didn’t travel up all that well and was off her feed. She’ll now stay in Queensland until the Magic Millions.”

Goldman was quick to praise his jockey – and partner – Heather Poland who rated her mount perfectly and, despite being headed at one stage in the straight, the filly fought back strongly to record her third win from six outings … and first black type success.

Eckstein is the 17th stakes winner for rising star of the stallion ranks, I Am Invincible, and Goldman is familiar with the breed, having earlier trained Inglis Dash winner, Hellbent, while Faust (by Librettist) gave the trainer his first black type victories in the Canberra Cup and BRC Premier’s Cup last year.

A farrier by trade, Goldman had a background in the equestrian industry before hanging out his training shingle: “I did a bit of everything … dressage, cross country. Was even riding in rodeos for a few years after I left school but then I thought sitting on the sidelines with a broken arm from riding bulls shouldn’t be in my life plan,” Goldman reveals. “I was shoeing a lot of horses for Sydney stables and I guess that’s where the interest in racing really kicked in.”

Former Australian Rugby Union player, successful businessman and leading owner, Alan Cardy, took a shine to the youngster’s work ethic and, as a consequence, Goldman is now his private trainer. It was Cardy who selected Eckstein from the Vinery draft at the 2015 Gold Coast Magic Millions, paying $165,000 for the filly.

“She is named after (Champion Ironman) Shannon Eckstein who is sponsored by Alan and he’s been waiting for one to come along worthy of the name. Hopefully she’ll produce some magic of her own on the Gold Coast next month.”

Eckstein was bred by NSW farm, Redbank North, who sold the filly for $50,000 at the 2014 Inglis Sydney Weanling Sale.

Based in NSW’s South West Slopes region and owned by the Middleton family since 1979, Redbank North provides myriad services – racehorse spelling, agistment, sales prep, foaling down – and it’s been a big 12 months for the farm, as stud manager, Dimity Middleton, is quick to point out.

“Apart from Eckstein, we bred and sold (Group One Vinery Stakes winner) Single Gaze, bred and sold Singapore Group winner, Snitzel Spirit and we also sold (4-time stakes winner) Mahuta, all of whom have really stepped up in the last year or so.

“We’ve only been breeding for 10 years and have about 50 mares on farm, 30 of them client’s mares, and Eckstein’s mum (Comrie) has just been scanned in foal to Mossman.”

Redbank North has joined forces with, Huntworth Stud, for the 2017 Magic Millions Yearling Sale and together will offer nine yearlings on the Gold Coast, while Redbank North has eight youngsters for the Inglis Sydney Classic under its own banner.