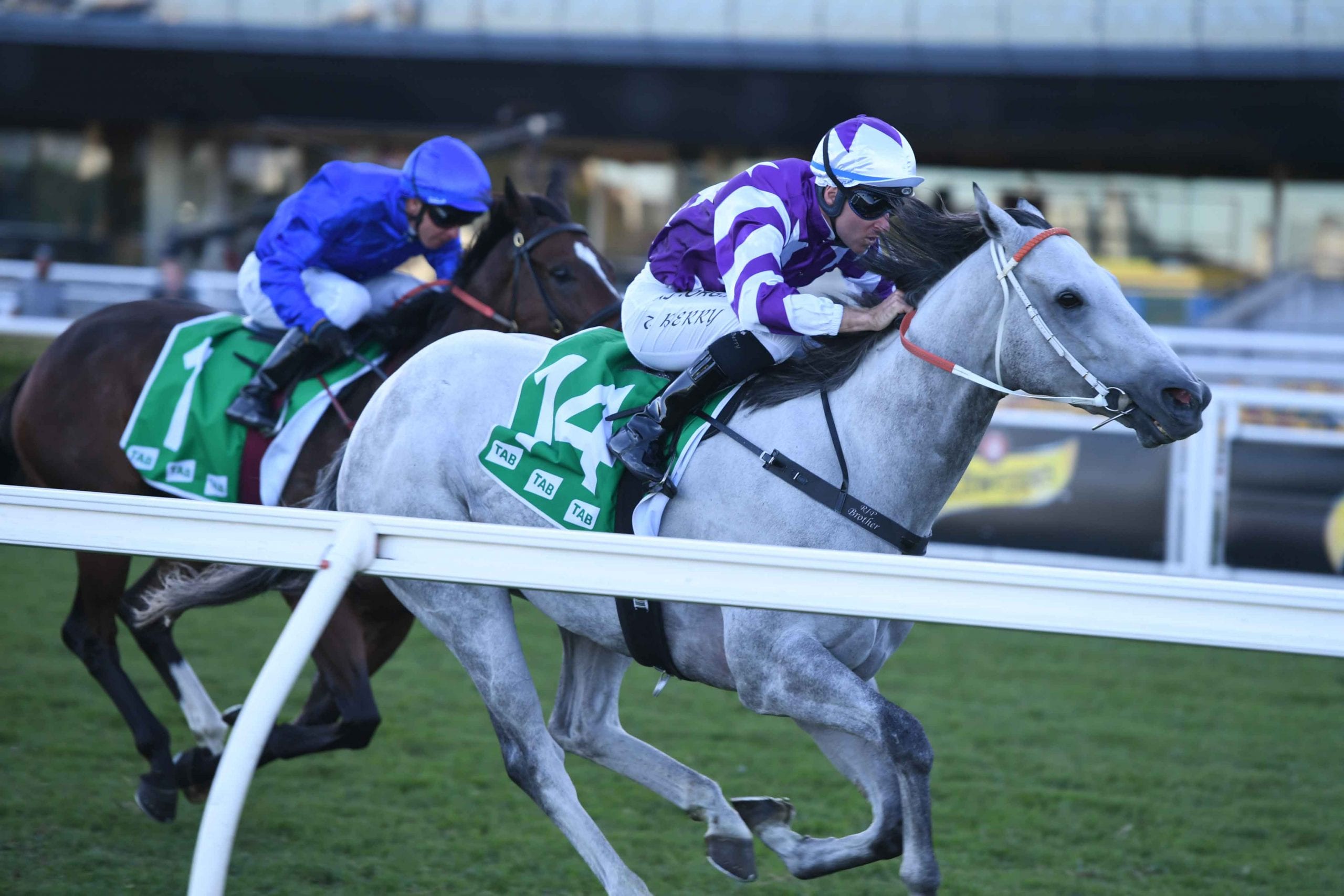 In a genuine display of sprinting prowess, Greyworm put the sword to a number of vaunted rivals in Saturday’s Group Three TAB Hall Mark Stakes over 1200m at Royal Randwick.

It was only the second tilt at black type level for the lightly raced 5YO, who had finished a little over a length off the pace when fourth in last month’s Group Three Maurice McCarten Stakes.

However, this time Greyworm wasn’t taking any prisoners and led throughout to score comfortably and leave four Group One winners in his slipstream.

Not surprisingly, the win was cheered on from afar by some very happy part-owners in Gary Lui and Hannah Martin of Eden Park Stud who, for obvious reasons, couldn’t be on course. That said, given time demands on the couple, it’s a toss up whether they could have made it to Sydney anyway!

“We purchased Eden Park Stud two years ago and it’s been pretty busy from the get go,” Hannah Martin explains. “We’ve got 45 broodmares on farm and will be foaling down 37 this spring.

“Eden Park has a few private spellers too, including Chautauqua who is getting ready for the next stage of his career – this time as a show horse.

“Gary and I have shares in about 15 gallopers here in Australia and race a further 15 in Hong Kong, Macau and Singapore with friends and clients. Quite a few of the horses that we foal down on farm will ultimately race overseas too.”

Based in Victoria’s Macedon Ranges, Eden Park was formerly owned by Joe and Daira Vella, under the Wingrove Park banner, and the Vellas also own a share in Greyworm.

With eight wins and four placings from 14 starts and $486,350 in stakes, Greyworm was purchased for just $110,000 at the 2018 Inglis Digital January Monthly Sale. Although unraced at the time, Greyworm had three official barrier trial successes for Kris Lees, making him quite the bargain … particularly when the then 3YO won two of his first three starts for his new owners, along with a half length third at Caulfield.

“It was around the time we bought Eden Park and like most of us in this industry, I always keep my eye out for any catalogues – digital or otherwise,” Martin reveals. “I was surprised to get him at that price … he’d won all his trials and passed the vet checks. He’s just a been a terrific racehorse and really capped it all off on Saturday.”

Greyworm’s success was a ‘hall mark’ of another kind for Martin too after a lifetime involvement with horses.

“I grew up with them and started riding trackwork for Gerald Ryan in Sydney,” Martin points out. “I moved around a bit and eventually ended up riding work in Hong Kong where I met Gary, but at one stage I was apprenticed to Bart and James Cummings and James had three in the race for Godolphin on Saturday: the favourite Deprive (a multiple Group winner), along with Trekking (Stradbroke winner) and Kementari (Randwick Guineas) who finished second and third.”

The thoroughbred industry has long held a fascination for Lui too, but after growing up in New Zealand, he chose to steer aeroplanes instead of horses: splitting his time between flights and farm work.

“The first horse I had a share in raced in Hong Kong and he ended up winning four races … by that time I was hooked,” Lui reveals. “I’ve had some good horses along the way including Time For War (a Group Two winner at two and sire of Group Two Silver Slipper winner Time To Reign) and Newhaven Park’s Group One winner, Xtravagant, but Greyworm is very special as he’s tied in so much with Eden Park.

“Full marks to Hawkes Racing – I’ve had horses with them for quite a while and they’ve done a marvellous job with Greyworm.”

Reminiscent of the Remington man, Lui likes Greyworm that much that he has bought the flashy grey’s sire, Master of Design.

“We’ll be standing him at Eden Park this year,” Lui adds. “He hasn’t had a great deal of commercial success but he produces maturing types that are suited to all conditions.

“Aside from Greyworm, he’s also produced a Group One winner in The Mitigator, while the stallion has some good runners in Hong Kong too including Lakeshore Eagle, who has won four races, some A$700,000 in stakes and hails from the same crop as Greyworm.”

Davis purchased Greyworm’s dam, Miracle Magic – again through an Inglis Digital Sale – with the mare carrying a full brother to Greyworm at the time.

Indeed, Miracle Magic would be covered by the then Swettenham based Master of Design for her first four seasons at stud, with Greyworm being her second foal.

“That was a tremendous result on Saturday and a huge boost for Miracle Magic,” Davis enthused. “Anthony Cranston and I only have seven mares at his property near Emerald … Anthony’s a breaker and pre-trainer and so we’ve got about 20 horses on farm. Amazing how quickly the numbers grow!”

At least three of those ‘numbers’ come courtesy of Miracle Magic.

“I purchased Miracle Magic for $13,500 in 2016 through Nick Melmeth, who runs the digital sales for Inglis, and she produced a colt that spring which we called Diesel Design,” Davis adds. “Diesel Design is part-owned by Monica Croston and Gerrard Gilmour who train him at Pakenham. He’s only had a couple of starts but is back in work and showing quite a bit of ability.

“We then had an O’Lonhro colt who has been broken in and due to trial in a couple of months, while Miracle Magic produced a Highland Reel filly last spring and is back in foal to Highland Reel at Swettenham.

“Greyworm’s success has certainly changed the entire dynamic … there’s been quite a bit of interest – especially after Saturday – in purchasing the O’Lonhro colt, while the Highland Reel could turn out to be quite a valuable filly as well.”

A secondary school teacher, Davis is also a keen, albeit now, ex, triathlete.

“As a triathlete you tend to get a bit consumed by it all and I reckon I’ve just swapped one obsession for another! You can get carried away a bit with the love and racing and breeding and next thing you know … horses everywhere!”