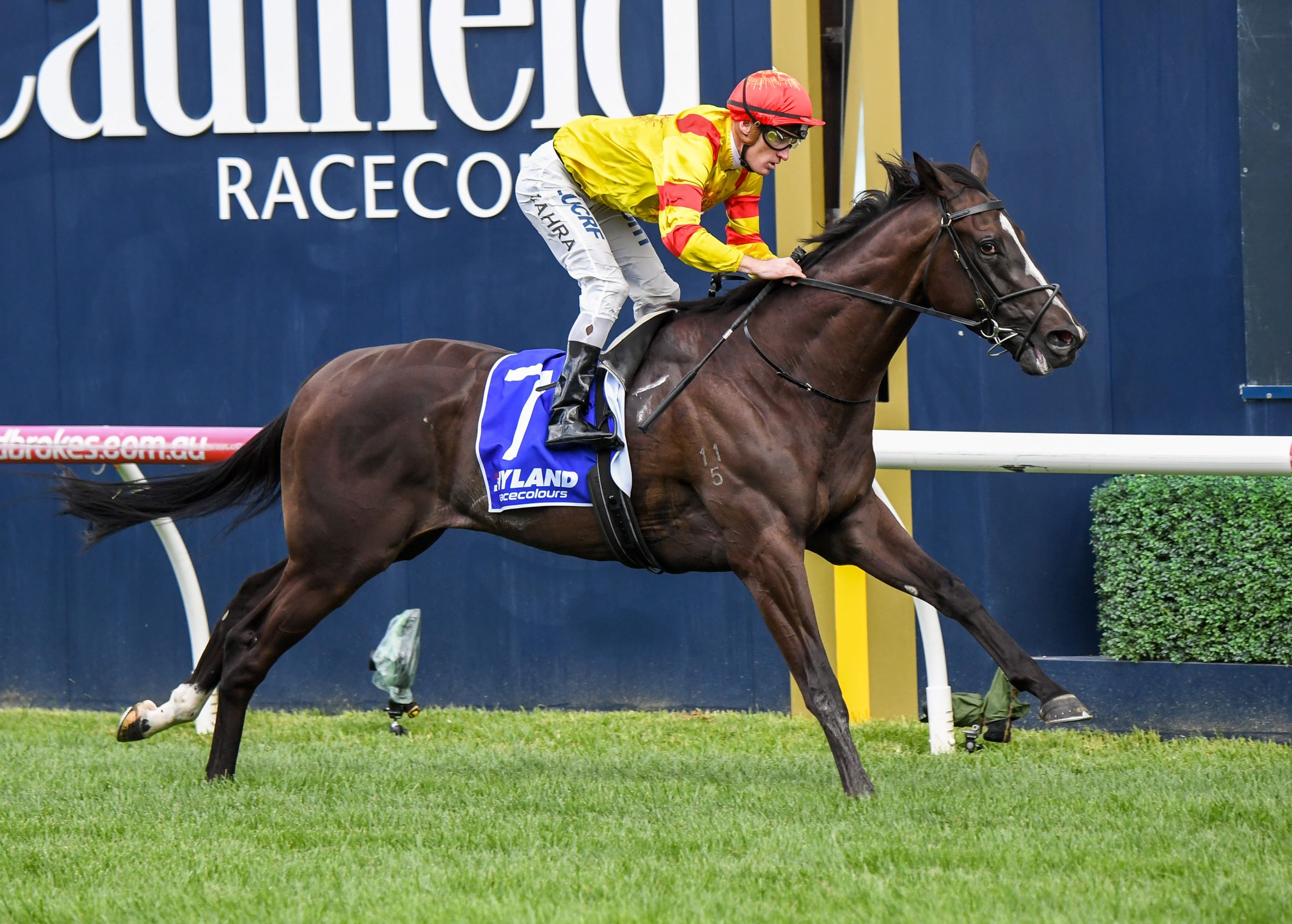 Contrary to the widespread belief that Australia is somehow lacking when it comes to breeding stayers, it’s worth noting that the last 12 Group One Derbies and Oaks have been won by Australian-bred gallopers.

Following on from his demolition job in Saturday’s Group Two Hyland Race Colours Autumn Stakes over 1400m at Caulfield, exciting youngster, Hawkshot, could well make it a baker’s dozen if he decides to take on the $2 million Group One Australian Derby at Randwick on 6 April.

It was a super performance from Hawkshot, who led throughout in the Autumn Stakes and would post 1.23.47 for the journey … a full second quicker than Manuel in winning the Group One CF Orr Stakes 40 minutes later.

After getting caught up in traffic in the $150,000 VOBIS Gold Carat at Moonee Valley on 25 January, Hawkshot took command early on Saturday and would eventually score with nearly four lengths to spare.

A first crop son of Melbourne Cup and Australian Cup winner, Fiorente, Hawkshot was bred by the Cheng family owned, Sun Bloodstock, which also stands the stallion at its Victorian based complex.

Ramping up its involvement in the Australian thoroughbred industry with the purchase of Sun Stud (formerly Eliza Park) in 2013, Sun Bloodstock has raced a number of top notch performers in its distinctive yellow and red silks – Palentino, Thronum, Fighting Sun, Ready For Victory and European Group One winner, National Defense among them – but Hawkshot is the best performed of the ‘bred and raced’ to date.

(Stars of Carrum, also by Fiorente and bred by Sun Bloodstock, won the Group Two Vase at Moonee Valley and finished second to Extra Brut in the Group One Victoria Derby last spring, but was purchased and is raced by Robbie Laing).

“He (Fiorente) is off to a super start,” Sun Stud’s Sales & Nominations Manager, Phil Marshall enthused. “Hawkshot’s full brother is also with Lindsay Park Racing and is being aimed at the (Group Two VRC) Sires’ Produce, while Hawkshot is currently a $7.50 shot for the (Group One) Australian Guineas next month.

“Stars of Carrum is on the same line of betting as Hawkshot for the Australian Derby, while Fiorente filly, Lunar Flare won by six lengths at Moonee Valley on Friday night and is one of the favourites for the (Group One) Australian Oaks. On top of that, Gee Gee Fiorente won by nearly four lengths at Hobart on Sunday.

“We always considered Fiorente to be the ‘fast stayer’ because he was Group One placed at 1400m, but realistically he will always be remembered for his Melbourne Cup victory and breeders decided to embrace that.

“After covering 186 mares in his first season, numbers had dropped a bit over the following three seasons, but he was up to 169 mares last spring on the back of how well his first crop was doing.”

Hawkshot is out of the well related Encosta de Lago mare, Rosa Perlato, a granddaughter of the Group One winner, Shindig, in turn the dam of 2008 CF Orr Stakes winner, Shinzig, and multiple stakes winner Strada.