Hillside’s Good Grace Is A Wake Up Call 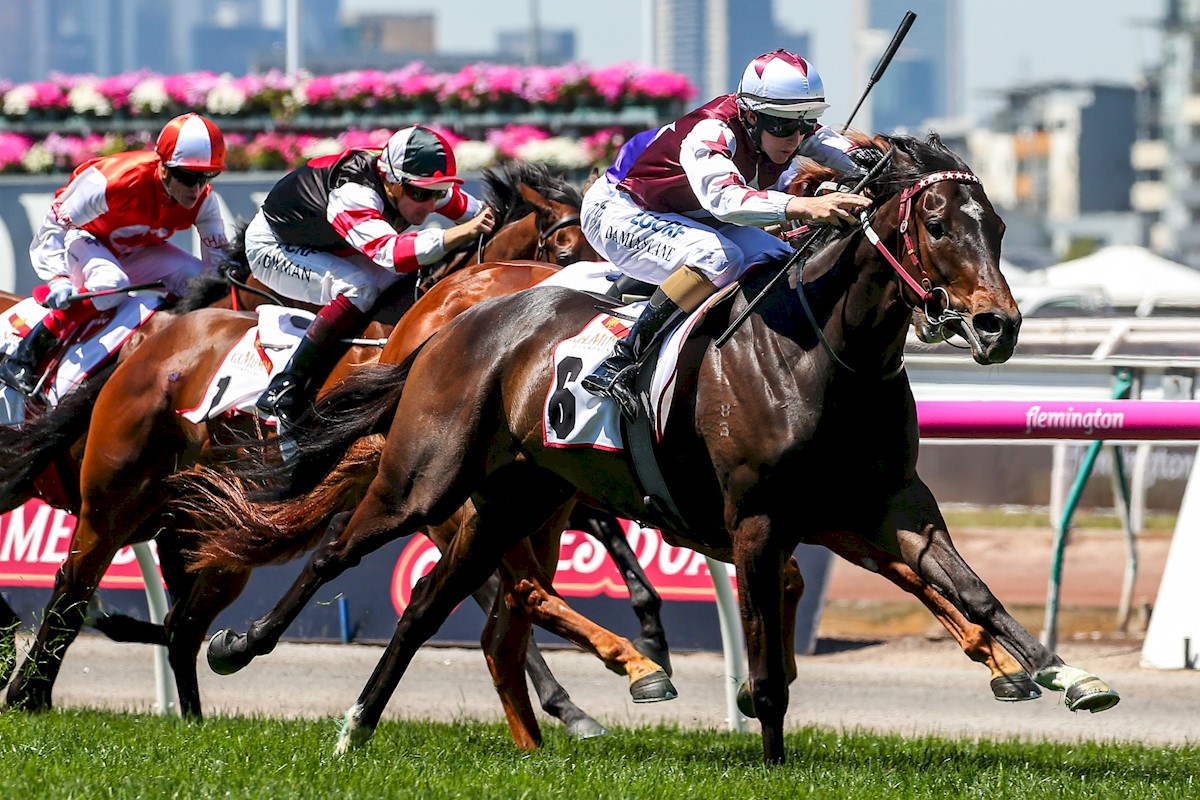 A lot of vendors reckon having Lot 1 in a sale is a bad draw, but Peter Ford will tell you that Lot 751 is no picnic either.

Ford’s Hillside Thoroughbreds had a “really lovely filly” by Monaco Consul entered for the last day of the 2015 Inglis Melbourne Premier Yearling Sale – less than a hour from the end of the fourth and final session – and he was desperate to garner some buyer interest.

Ford pigeon-holed good friend, John Salanitri, and suggested he wouldn’t go too far wrong if he bid on the filly and the trainer duly complied, keeping his hand up right until Darren Weir chimed in at $50,000.

That ‘lovely filly’ was subsequently named, Tiamo Grace, and on Saturday, she became winner of the time honoured, Group Two Mumm Wakeful Stakes.

Ford, naturally enough, was at Flemington and cheering on the filly when his mobile buzzed with a text from Salanitri. No words, just two emojis: a sad face and a gun.

“Johnny’s a terrific bloke and a good sport, but he’s ruing the fact he didn’t go a bid or two more,” Ford points out. “That’s racing for you though.

“I purchased the dam of Tiamo Grace – Sicile – at the Patinack Farm Dispersal Sale in 2012 for $41,000, with a colt at foot by Lope de Vega and in foal to Monaco Consul.

“The Lope de Vega has subsequently won in Singapore, the Monaco Consul is of course, Tiamo Grace, while we (Hillside) sold a Medaglia d’Oro for $280,000 in Melbourne this year and she (Sicile) is now in foal to Vancouver.”

Hillside Thoroughbreds, owned by Peter Arvanitis and based at Nagambie in Victoria’s north east, was established in 2011 and Tiamo Grace hails from the first crop actually bred on the property.

“I have to say, we’ve had a terrific run with the 3YO fillies this season,” Ford adds. “Aside from Tiamo Grace, Hillside also foaled down Whispering Brook who won her first five races for Simon Miller, ran third in the Thousand Guineas and was in the Myer Classic on Saturday … Robbie Griffiths’ Classic Diva finished less than three lengths off the winner in a Group Two on Cox Plate day … Areti won at Moonee Valley on debut and ran in this year’s Blue Diamond … and Corporate Missile was a winner in New Zealand last month before following up in a Group Three at her next start.

“I spoke to Darren Weir at the races on Saturday and he was uncertain about Tiamo Grace backing up in the Oaks. From what I understand, only one other Wakeful winner in the last 30 years hasn’t gone on to race in the Oaks, but if they do change their mind and decide to have a crack, I’ll be interested to see what John (Salanitri) texts me next time!”

The win of Tiamo Grace was also cause for celebration at Kingstar Farm in the Hunter Valley, which stands Monaco Consul as one of its foundation stallions.

Owned by Matthew Sandblom and opening its gates in February, Kingstar Farm secured Monaco Consul – a Victoria Derby winner by High Chaparral – from Patinack Farm and Tiamo Grace is his first stakes winner.

“He (Monaco Consul) went close last year with Honesta who ran second in the VRC Oaks and Flight Stakes and we were all cheering on Tiamo Grace on Saturday,” Kingstar’s Stud Manager, Adam Cook, reveals. “We always thought that Monaco Consul would produce gallopers that could get over a distance and Tiamo Grace and Honesta are certainly showing that.

“Monaco Consul has attracted a good book of mares this season and with his oldest only 4YOs, I really believe they’ll start coming into their own.”

Cook added that Monaco Consul’s stablemate, Bull Point, was off to a flying start too with well over 100 mares in his initial book.

“Matthew (Sandblom) has really supported Bull Point with a number of mares and the horse has been a real gun in the breeding shed,” Cook explains. “He was a Group winner in Melbourne, multiple Group One placed, is a son of Fastnet Rock and is out of a full sister to Mica’s Pride.

“What a great mare she’s been … Mica’s Pride is the dam of Criterion, Group Two winner, Varenna Miss, Sydney stakes winner, Silently, and, as of Saturday, dam of (Group Three) Carbine Club Stakes winner, Comin’ Through, who is also by Fastnet Rock.

“So yes, we had plenty to cheer about on Saturday!”

HOOFNOTE: As if Tiamo Grace, along with Bull Point’s relationship to Comin’ Through wasn’t enough, Matthew Sandblom had further cause for celebration on Saturday when his 3YO filly, I Am A Star raced away with the Group One Myer Classic at Flemington.

Trained by Shane Nichols, I Am A Star was purchased by James Harron Bloodstock – on behalf of Sandblom – at the 2015 Inglis Classic Yearling Sale and with the Myer victory, she has now banked $636,450 from her four wins in nine outings.

As a major shareholder in Newgate Farm and in several of its stallions, Sandblom will at least have plenty of options by the time I Am A Star retires to the breeding barn!

The Group One victory of I Am A Star also capped off a remarkable day for the Yarraman Park based stallion, I Am Invincible who made it a Group double at Flemington when the Peter Gelagotis trained, Illustrious Lad, closed out the Derby Day program by capturing the Group Two TAB.COM.AU Stakes.

Similarly, Illustrious Lad was an astute purchase – costing just $40,000 at the 2013 Gold Coast Magic Millions Yearling Sale – and this Group Two (his third black type victory) has taken his earnings to $557,050.

And just to top it off, I Am Invincible also had winners in Sydney and Brisbane on Saturday to go alongside the Flemington pair.

With his oldest progeny now 5YOs, I Am Invincible has 14 stakes winners including 2014 Coolmore Stud Stakes hero and now sire, Brazen Beau.