History Making Magic On The Coast 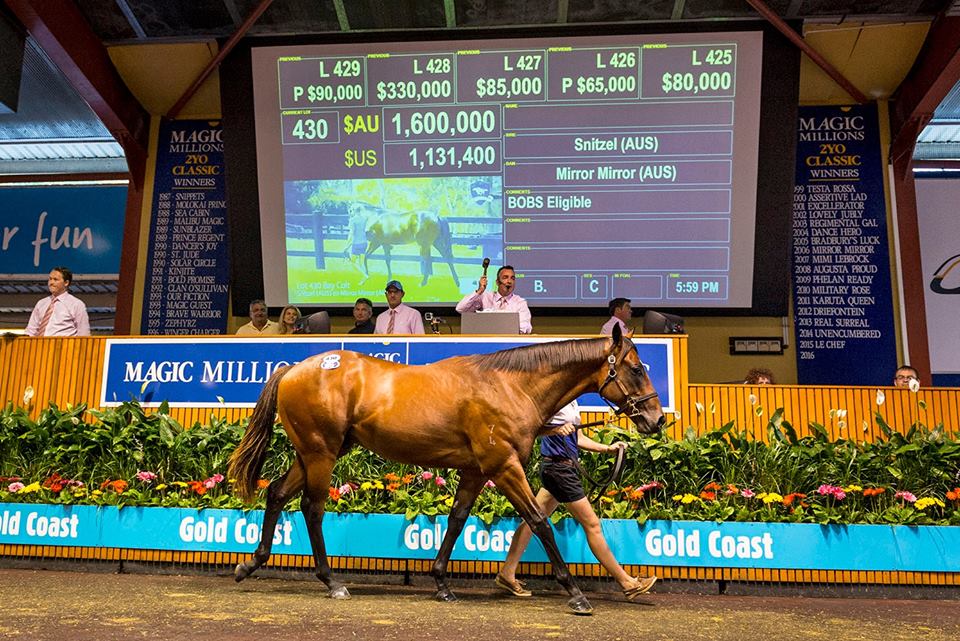 As the curtain came down in Saturday night’s Book 1 of the Magic Millions Yearling Sale, history books were re-written with all facets of the sale setting new benchmark levels across the board.

With an increased number of yearlings catalogued, and a significant international presence on hand, six yearlings made $1 million or more, once again another record for the sale company.

Damion Flower’s Jadeskye Racing teamed up with trainer Gerald Ryan to part ways with $1.6 million to secure the Strawberry Hill-consigned Lot 430 (pictured) on the second day of selling.

By Arrowfield Stud’s Snitzel, who was interestingly purchased by the same duo back in 2004, it was a significantly different amount to the $260,000 it took to snare Snitzel as a yearling.

The pedigree of the colt has Magic Millions 2YO Classic written all over it.

Snitzel started the favourite in the race of his juvenile year before finishing third, while Mirror Mirror the dam of the colt won the race in 2006 with her Redoute’s Choice filly No Looking Back first across the line 2012 before relegated to second on protest.

“We expected to pay good money but not that much,” said Flower.

“I saw him on the video and said to Gerald ‘this is a horse’. Then when I came up here, I said I would not go home without him.

“He is probably the best Snitzel I have ever seen.

“We obviously have an affinity with Snitzel because we’ve raced him and seen all his progeny and this was just the most outstanding colt.”

Ryan was also effusive in his praise for the colt.

“I read his page in the book and then stood and looked at him for probably 90 seconds and just wrote ‘best colt I’ve seen for three years’.

“There’s a lot of nice horses on the grounds but as far as Snitzel goes and as far as his pedigree goes and the way the horse’s attitude and athleticism goes I reckon he really fitted the bill,” Ryan added.

While Snitzel provided a further two of the top six lots in Arrowfield Stud’s pair of Lot 233 ex Flidais and Lot 476 ex Nocturnelle, it was Champion 2YO colt and first crop sire Pierro who produced the second and third top lots of the sale.

With expectations high that Lot 612 from the draft of Segenhoe Stud would sell extremely well, connections were overjoyed with the $1.5 million spent by Coolmore to secure the Pierro x Skates colt (below), a half-brother to Group 1 Golden Slipper winner Vancouver.

“It is very good to get that result for our clients and also for us with the horses we have reared; it has been a good sale,” stated Segenhoe Stud’s owner Kevin Maloney.

A record price for a yearling by a first crop sire, Tom Magnier of Coolmore, who stands Pierro, was extremely pleased to be taking home the colt.

“We are delighted to have got him – he’s a star,” said Magnier after the sale.

“It’s a family that we know well, with Skates having been a long term resident at Coolmore before joining Peter (O’Brien) at Segenhoe.

“She’s been a fantastic mare for John and Deb Camilleri over the last couple of years.

“Credit to them both, as well as Peter O’Brien and his team at Segenhoe – they have bred and presented an outstanding yearling. Let’s hope he’s lucky and runs up to his looks.

“We have enormous faith in Pierro as a young sire and everyone I’ve spoken to has loved what they’ve seen of his yearlings. It all bodes very well for a bright future.”

Earlier in the day it was Coolmore who were acting as the vendor, rather than the purchaser, offering Lot 448, the Pierro x Monsoon Wedding filly.

Purchased by James Harron Bloodstock and De Burgh Equine for $1.4 million, the filly was secured on behalf of John Sikura, owner of the Hill ‘N’ Dale Farm in the United States.

“She’s a beautiful filly,” Harron said. “She’s got a huge, huge page and these families are hard to get into. There is a massive amount of residual value there with her.”

“It’s a family now with a couple of sisters in America being bred to War Front and Medaglia d’Oro and other mares in Europe going to Galileo. It’s one of the best families in the world now – it’s international.”

A stakes placed full sister to Redoute’s Choice, Monsoon Wedding was purchased in foal to Pierro by Coolmore for $2.3 million as part of the Teeley Dispersal Sale at the 2014 Magic Millions National Yearling Sale.

Monsoon Wedding was sent to the Northern hemisphere after she foaled her Pierro filly.

With the record results achieved, Magic Millions Managing Director Vin Cox was ecstatic with the outcome.

“To get past $100 million is great, the stuff of dreams,” enthused Cox.

“It’s a great time to be on the Gold Coast for everyone and the weather was perfect.  The imagery, colour and quality of the raceday was enormous and the sale even bigger, it can’t get any better than that.”

“That has to be good for the Australia Thoroughbred industry as a whole. We are absolutely delighted.”