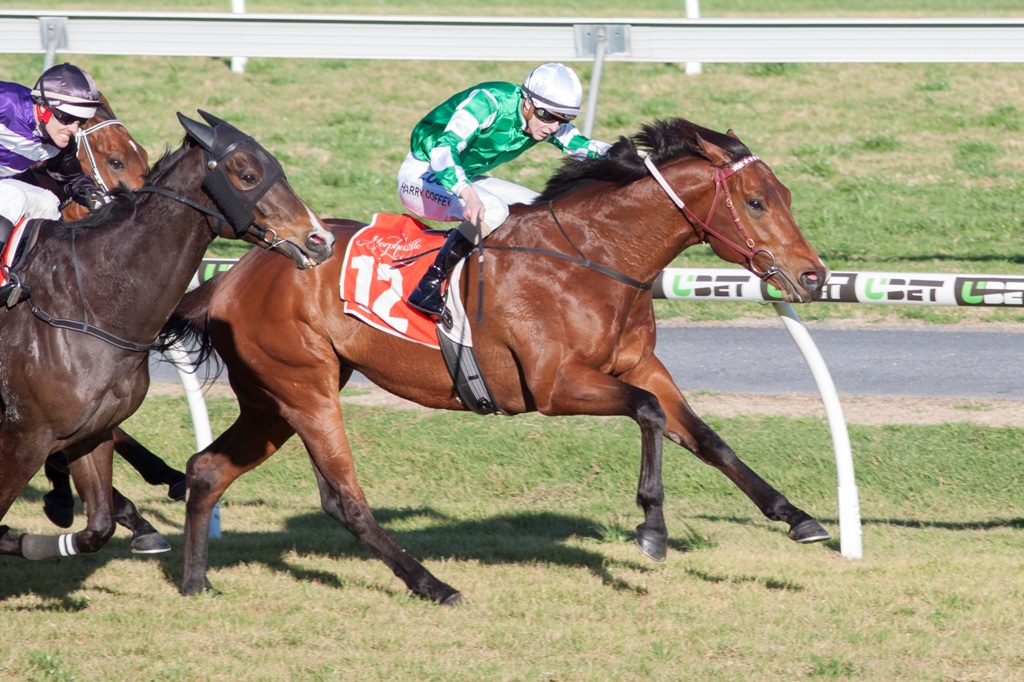 It is still a fair distance from the racetrack to the breeding barn, but speedy entire, Holy Blade, took a huge stride in the right direction by capturing Saturday’s Listed WH Wylie Handicap over 1100m at Morphettville.

A 4YO by boom sire, I Am Invincible, Holy Blade is raced by Zhang Yuesheng’s Yulong Investments which itself is rapidly establishing a sizeable hoofhold on the Australian thoroughbred industry.

Having just his 13th start in the Wylie, Holy Blade has won six – two on end – and placed in three but this was his first success in black type company.

Aside from the I Am Invincible factor (also sire of emerging stallions Brazen Beau, Super One, Overshare, Kobayashi and former stablemate, Hellbent), Holy Blade is out of the 2YO stakes winner, Amphritite and hails from the family of 2017 Group One All Aged Stakes winner, Tivaci.

“We are in the process of building a 10 stable stallion barn with two serving sheds at our Nagambie (formerly Limerick Lane) property and will be aiming to stand some higher end stallions from next year,” Fairgray explains. “Whether Holy Blade eventually joins them is in the lap of the gods but we’re going to take it race by race and he’s certainly a lovely type of horse. He’s always had plenty of ability and is hitting peak form at just the right time, so there’s a lot of options in the spring for him. A race down the Flemington straight would be ideal and we’ll see where we go from there. He’s still only a lightly raced 4YO so anything could happen over the next couple of months.”

A lot could happen with Yulong too as Fairgray adds that they have 55 2YOs on the books after a massive buying spree at 2018 yearling sales, along with half a dozen juvenile home-breds.

“We have some lovely youngsters coming through, that’s for sure,” Fairgray enthused. “In fact, there is an I Am Invincible filly, Catch Me, who is with the Snowdens and is likely to race in Saturday’s (Group Three) Gimcrack Stakes at Randwick. There is also a nice colt that we bred by Sepoy out of (multiple Group winner) Neena Rock who is called Yulong Rockstar and is with Ciaron Maher. He definitely looks like he’ll have a start before Christmas too.

“Mr Zhang is very passionate about his horse interests … he got a terrific thrill out of Holy Blade’s win on Saturday but was also happy to see Killarney Kid win over 3300m at Coleraine on Sunday. Killarney Kid is a 9YO and the Coleraine win took his earnings to a tick over $500,000.

“Hopefully we end up having a lot more weekends like that over the next couple of months.”

Yulong Investments is one of the major players in mainland China’s thoroughbred industry with Mr Zhang staging regular race meetings in Shanxi province and owns the racetrack, plus a vast stabling complex.

(A large contingent of Australians, including representatives from Aushorse, recently visited Shanxi province to attend a conference, a sale and race meeting hosted by Mr Zhang).

Initially purchasing a number of horses and a 170 acre complex at Koo Wee Rup, south east of Melbourne, four years ago, Yulong has certainly ramped up its involvement, buying Limerick Lane (450 acres) and Hillside Thoroughbreds (250 acres) at Nagambie earlier this year. The Koo Wee Rup property will be utilised primarily for Yulong’s spellers, while the Nagambie farms will represent the company’s breeding arm.

Yulong was also quick off the mark in securing the Redzel ‘slot’ for the $13 million The Everest at Royal Randwick on 13 October after the Triple Crown flyer won last year’s inaugural event.

“Stakes winners, The Everest, new farms and a lot of emerging 2YOs … it certainly is an exciting time,” Fairgray points out.