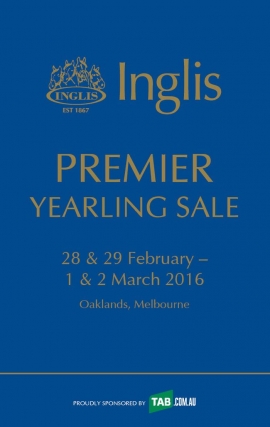 The catalogue is now available online for the 2016 Inglis Premier Yearling Sale, to be held on 28, 29 February and 1, 2 March at the Inglis Oaklands Sales Complex.

A sale that is continually on the rise, in recent years it has produced Group 1 winners Costa Viva, Kushadasi, Trust In A Gust, Hot Snitzel, Alboran Sea and Good Project.

“The Premier Yearling Sale has experienced increases year on year due to outstanding vendor support from across Australasia and growth in the quality of bloodstock offered at the sale,” said Inglis Victorian Manager Simon Vivian.

The catalogue is littered with Australia’s leading black type families, with 100 half or full relations to stakes winners to go under the hammer at Oaklands. Progeny from 98 stakes winning dams will be offered by 80 vendors.

Some lots sure to create attention include an Animal Kingdom colt (lot 20) out of Frenchs Forest, a half-sister to multiple Group 1 winner Miss Finland, the dam of this season’s Group 1 Thousand Guineas winner Stay With Me (Street Cry), pictured below.

Lot 38 is Erinvale Thoroughbreds’ Pierro half-sister to Group 1 Victoria Oaks winner Arapaho Miss, while Millburn Creek will consign Lot 40, an All Too Hard filly out of Group 1 Coolmore Stud Stakes winner and Champion 2YO Filly Headway as well as Lot 109, a filly by the same sire out of the triple Melbourne Cup winner Makybe Diva.

Rosemont Stud’s Lot 180 is Toorak Toff colt out of the Falbrav mare Marci Proba, herself a half-sister to Group 1 Galaxy winner Sweet Idea, while the same farm will also consigned another lot by their resident stallion, this time Lot 185, a colt out of an Exceed And Excel half-sister to Divine Madonna.

With over 700 lots catalogued, the above only touches the surface of the four day sale. To view the catalogue online, click here.