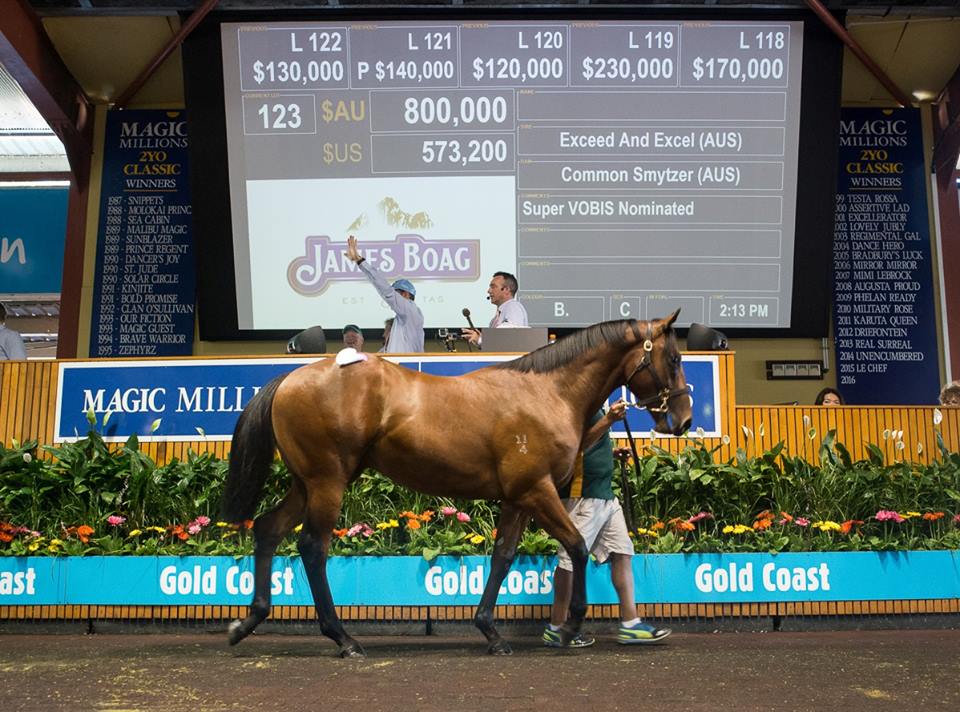 One thing that was quite evident after Book 1 of the Magic Millions Yearling Sale was that the international investment was very strong.

Securing 21 lots on their own and further five in partnerships, the overall investment for the 26 yearlings exceed $9 million, almost 8 per cent of the overall gross.

Purchased in partnership with Hong Kong’s George Moore Bloodstock, Lot 123, the Exceed And Excel x Common Smytzer colt (pictured right) from Ampulla Lodge was knocked down to the pair for $800,000, the top priced achieved for a yearling by the Darley stallion at the sale.

A $300,000 weanling purchase from the Inglis Great Southern Sale in June by Ampulla Lodge and Ascot Farm, the final priced secured by the colt was a record achievement for the small Victorian farm run by Steve & Ceri Jostlear.

A full-brother to Group 3 Maribyrnong Plate winner Exceedingly Good and a half-brother to Singapore’s multiple stakes winner Better Be the One (More Than Ready), Moore has enjoyed success with the progeny of Exceed And Excel previously and said: “He was a good moving horse.

“We are not really 100 per cent if we are going to race him in Australia or race him in Hong Kong,” Moore said.

“If we race him in Australia, we will probably put him with a more forward trainer. My uncle (Gary) might train him and target the Maribyrnong Plate, just like his full-brother.”

In fact the Chain Horse Club contributed considerably to the success of South Australia’s Mill Park Stud, purchasing three of the farm’s six yearlings for a total of $1.435m.

Another member of the international bloodstock fraternity who purchased a hand full of yearlings was Spendthrift Farm.

The top purchase for the farm was Lot 264, a Fastnet Rock half-brother to Rosemont Stud’s Starspangledbanner from the draft of Milburn Creek for $800,000, while the farm paid $625,000 for Lot 15, a colt by Street Cry out of the Group 1-winning Encosta de Lago mare Aloha from the draft of Baramul Stud.

To take a listen to Spendthrift Farm’s Ned Toffey and what he looks for when investing at the yearling sales, watch the below clip ‘The Investor’.