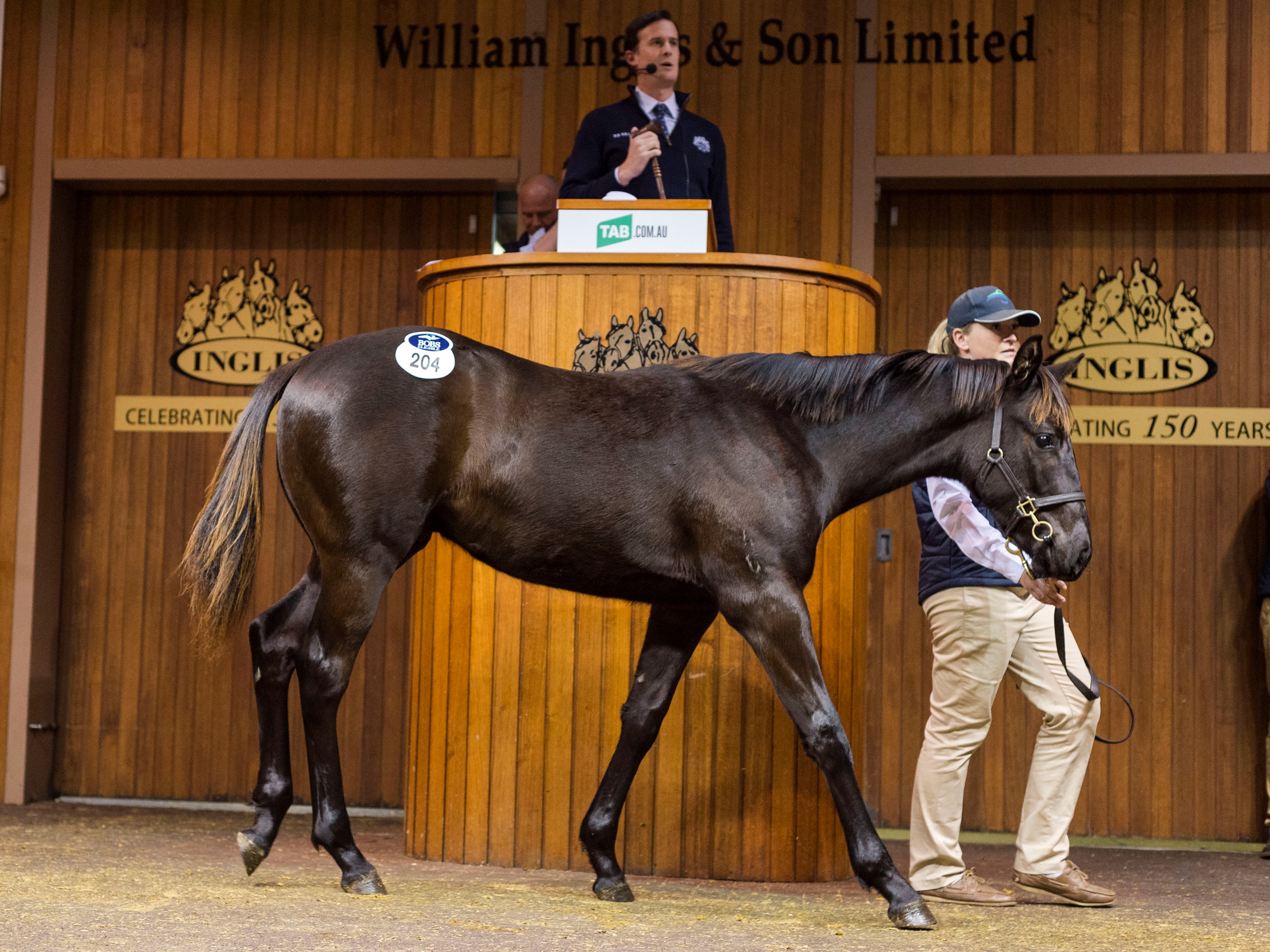 The colt by More Than Ready from Calming Influence sold for a record $310,000 (Inglis).

In fact, he’d much rather have to pay less for the quality he seeks, but there he went again on Sunday, forking out $310,000 for a More Than Ready colt from Calming Influence.

It was the highest price ever paid for a weanling at the Inglis Great Southern Sale and broke the benchmark set two years ago when an Exceed And Excel colt out of Common Smytzer was knocked down for $300,000 … to Steve Jostlear!

Everything worked out well that time with Jostlear only taking six months and some TLC to turn the $300,000 into $800,000 when the colt was on sold to George Moore at the 2016 Gold Coast Magic Millions Yearling Sale and the pinhooker will undoubtedly be looking to repeat the dosage in 2018.

Jostlear certainly is enamoured with his latest acquisition and had no hesitation in declaring the colt to be one of the best he’s seen.

“Head, shoulder, body, balance … and a great walker too,” Jostlear enthused. “He just looks like a natural racehorse. What’s more, he got an amazing temperament. Nothing seems to faze him.

“The crew at Swettenham Stud (which consigned the colt) told me that they’ve never had one taken out of the box as often as he was and yet, he didn’t turn a hair. I watched him for two hours on Sunday … an hour in the morning and an hour again in the afternoon and he didn’t muck up once.

“He was the only one we bought on Sunday and was late into the ring (Lot 204), but absolutely worth the wait.

“I was underbidder on a few up north (at the recent Gold Coast Magic Millions National Weanling Sale) but got poleaxed. The prices were incredible.

“As it turns out though, I reckon this colt is better than anything I’ve seen this year and happy to have got him for the price we did because there were enough people on him.”

The first session of the 4-day Great Southern saw 10 weanlings reach figures of $100,000 or more, spreading the wealth across seven stallions: Written Tycoon (3), Street Boss (2), More Than Ready, Brazen Beau, Dissident, I Am Invincible and Zoustar.

Prominent Victorian breeder Cathy Hains has brought 12 weanlings to Oaklands Junction under her Burnewang North Pastoral banner and was pleased with the $130,000 for her Zoustar filly from Snow Blitz.

“The Great Southern is definitely getting stronger and is fairly reflective of industry growth in Victoria,” Hains points out.

“There are a growing number of commercially orientated breeding farms in Victoria and they are starting to target sales like this with some very good horses. There’s always room for improvement though and while the better types sold solidly, there were a number of weak links as well which showed up in the clearance rate from the first day.

“Full marks to Inglis as they have really grown the brand in this state and there’s clearly a burgeoning interest in the market place down here, and for this sale in particular, but it’s worth noting that there’s also strength in diversity. As long as we continue to embrace that diversity the local industry will continue to grow.”