Unbeaten Jukebox The Pride Of WA 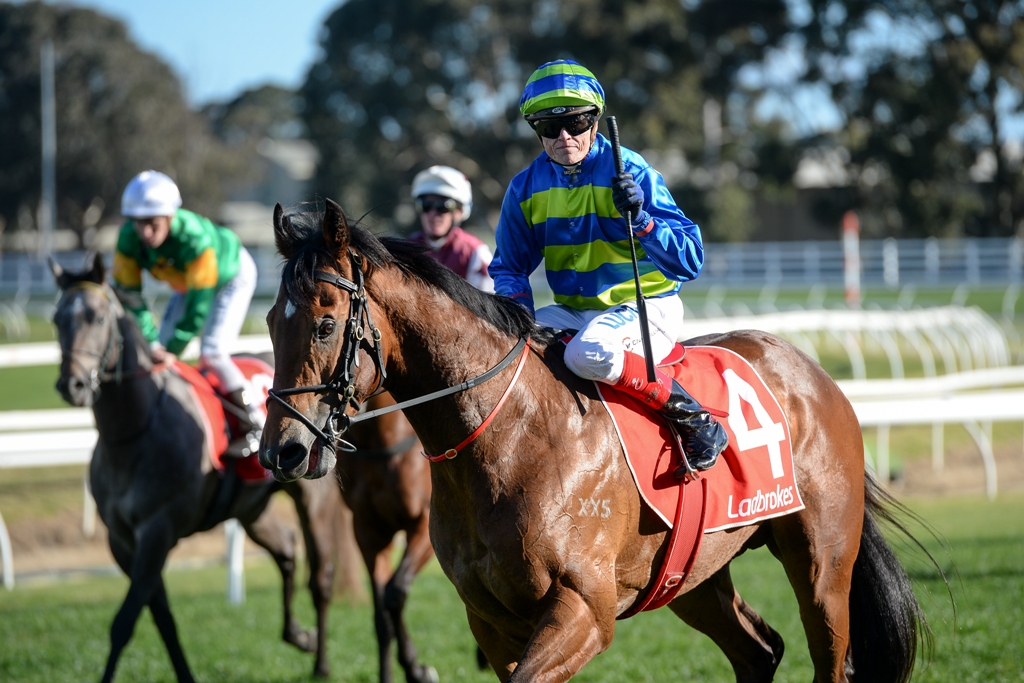 Jukebox made a triumphant return in Gr.3 Vain Stakes on Saturday (Racing Photos)

Speedy 3YO colt, Jukebox – winner of Saturday’s Group Three KS Environmental Vain Stakes over 1100m at Caulfield – is trained in Victoria, was sold in Victoria, is by a NSW based stallion and has done all his racing (thus far) in Victoria.

However, it turns out he’s as West Australian as good plonk and mining multis and joined – on Saturday – a lengthy list of stakes winners who first saw the light of day at Neville & Susan Duncan’s Oakland Park Stud, a showcase property nestled between Busselton and the Margaret River.

“People have a tendency to underestimate the quality of horse we breed in the west, but we sent across five horses to be sold under the Blue Gum banner at the 2016 Inglis Melbourne Premier Yearling Sale and ended up topping the averages,” Neville Duncan points out.

“Jukebox was among them and he ended up being sold to Ciaron Maher for $200,000, while also in that draft for us was Ducimus who won the Listed Talindert Stakes at Flemington and was fourth in the Vain on Saturday. He’s obviously looking for firm going and a little longer, while another of our Inglis Premier yearlings was Fantastic Show (by Not A Single Doubt from Evoked) who won as a 2YO in Hong Kong.

“Interestingly, West Australian breds like Quilista, Vega Magic and Black Heart Bart all ran very well on Saturday too, which is a ringing endorsement for a local industry that only makes up a relatively small proportion of the racing population.

“We’re happy to fly under the radar though – it’s not about promoting yourself.

“Bottom line, people will keep coming back if you keep supplying them with good racehorses and you have to sell winners to balance the books and move forward.

“Ultimately, you should always let your horses do the talking.”

Talking? Oakland Park breds have been doing a lot of that since the Duncans got serious about their horse breeding in the mid 1990s with subsequent farm graduates including 11-time Group One winner (and dual Cox Plate hero) Northerly, Group One winners Covertly and Shirazamatazz and multiple Group winners, Marasco, North Boy, Roman Time and Grand Nirvana all calling Oakland Park home.

Another is Group One Kingston Town Classic winner, Ihtsahymn, who is a half sister to Listed WATC Gimcrack Stakes winner, Jestatune, the mother of Jukebox and three other winners, who was also bred at Oakland Park.

“We purchased Umatune, Jestatune’s dam, at the 2003 Inglis Broodmare Sale in Sydney and she was a terrific mare for us,” Duncan adds. “Two stakes winners, two other stakes horses and now Jestatune has an unbeaten stakes winner in Jukebox.

“We’ve got a Not a Single Doubt yearling filly from Jestatune but the mare was later sold and died before producing another foal. Still got a few of the family running around our paddocks though.”

Remarkably, Oakland Park’s success has come from a relatively small base.

“Up until recently, we only used to breed from 14 to 15 mares annually,” Duncan reveals. “However, we’ve now got four full time staff on our 300 acre property, with around 30 mares to support our three stallions: Rogano, a full brother to Not a Single Doubt, whose oldest have just turned four and is currently ranked eighth in Australia on the average earnings index; Sessions, a Group Two winning son of Lonhro and; Safeguard, an unbeaten 2YO by Exceed And Excel, whose oldest progeny are now yearlings and is standing for the first time at Oaklands in 2017.”

One thing is for certain, Ciaron Maher will seek out the Oakland XX5 brand on either side of the Nullabor from now on, given the steady rise and rise of Jukebox.

First sighted in a 2YO Maiden at Geelong on 12 January, where he won comfortably, Jukebox established his bona fides with an emphatic victory in the $250,000 Inglis Premier at Caulfield on 4 February, scoring with two panels to spare.

Unfortunately, problems with his feet saw Jukebox sent to the spelling paddock instead of an intended Blue Diamond route.

Maher was, naturally enough, buoyed with Jukebox’s triumphant return in the Vain and said the colt is next likely to start in the Group Two Danehill Stakes over 1200m at Flemington on 16 September.

“He (Jukebox) had a good, long break and has come back really well,” Maher enthused. “You love to see a 3YO colt resume like that and he’s very exciting.”

Maher also paid special tribute to “good mate”, John Bunting, who has worked extensively on the colt’s feet and is regarded as one of the best farriers in Victoria.

“Jukebox had a problem with his feet from the time he entered Ciaron’s stables, so he had to race with glue on shoes throughout his first prep,” Bunting reveals.

“There was always a weakness on the inside branch of his foot and it only deteriorated from the Geelong win onwards and ultimately saw him scratched from both the Blue Diamond and the Todman.

“So, Ciaron sent Jukebox down to Lee Powell’s Fulmen Park which has a great sandy base and lots of grass cover and let the horse get back to nature.

“We left the shoes off and attended to his feet every two weeks and he’s absolutely thrived. The action is good and the feet are now the best I’ve seen them.”