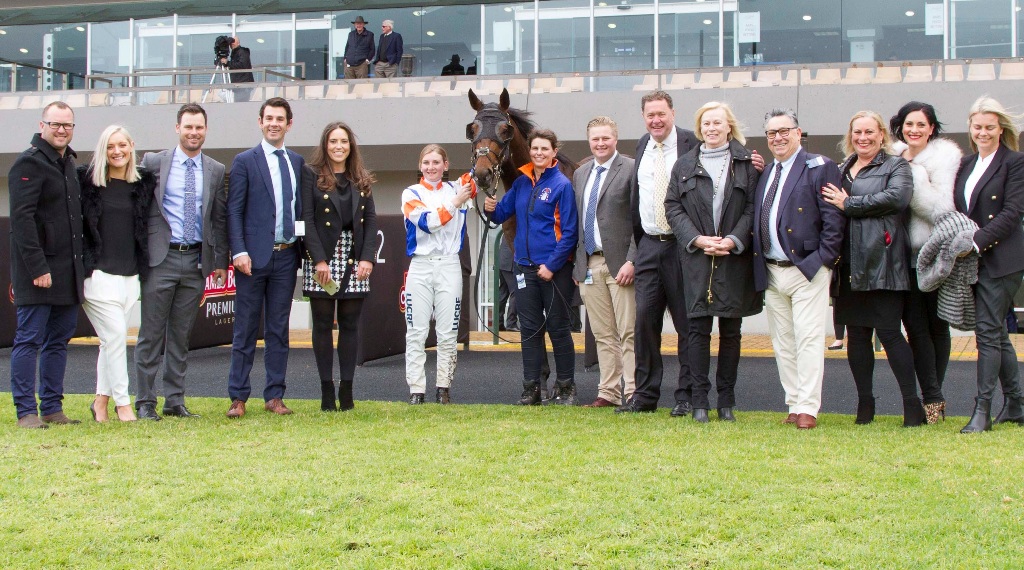 It’s not hard to work out why Lauriston Thoroughbreds’ James O’Brien is pretty excited about the prospects of unbeaten 3YO colt, Just Rolling.

The Tony McEvoy trained youngster made it two from two in the Irish Race Day – 1st September Handicap over 1300m at Morphettville on Saturday and appears to have a bright future.

Sure, Victorian-based Lauriston didn’t retain a share in Just Rolling when selling the Sebring youngster for $330,000 at the 2017 Inglis Melbourne Premier Yearling Sale, but the significance of the rising galloper’s progress far outweighs monetary considerations.

After all, there’s a great deal of pride involved in this too: Just Rolling’s dam, the Encosta de Lago mare, Just Our Girl, is the first live foal of the brilliant race filly/mare, Gold Edition, which the O’Brien family raced with distinction in the mid noughties. The Champion mare’s 17 wins included a Manikato and Ascot Vale – both at Group One – five Group Twos, three Group Threes, four Listed and a whole host of Group One placings.

Sadly though, Gold Edition has had a checkered career in the breeding barn, producing just the three named foals (including an unraced 2YO) in the last 10 years.

“The great thing is that Just Our Girl was – IS – a smashing type and is turning out magnificent horses herself,” O’Brien points out. “Lauriston sold Just Our Girl to Greg Eurell for $520,000 at the 2012 Inglis Australian Easter Yearling Sale and she was owned by the same people who raced Pinker Pinker (2011 Cox Plate).

“Just Our Girl didn’t do too much on the track and her owners really weren’t that interested in the breeding side of things, so we were able to buy her back.

“Her first three covers have produced colts, by Sebring, Snitzel and Not A Single Doubt and they are all outstanding athletes. The Snitzel colt was sold to Sun Bloodstock for $300,000 at this year’s (Inglis) Melbourne Premier (Yearling Sale), while her Not A Single Doubt colt will go to Melbourne for the 2019 Prem. Just Our Girl is heading to Merchant Navy this spring so we’ll be obviously keen to see what she turns out with him.”

O’Brien has closely watched Just Rolling’s two runs to date and came away suitably impressed – particularly with the win at Morphettville.

“He was caught wide on debut at Gawler, but that run on Saturday was something else: it was only a small field but 100 metres from home it appeared as if he would run a long last, but then he just finished it off so well,” O’Brien enthused. “We (Lauriston) had a very good spring last year with horses we bred winning big races in successive weeks, courtesy of Legend of Condor (Victory Vein Stakes), Global Glamour (Group Two Tristarc) and Epitmum (Telstra Stakes) and hopefully a colt like Just Rolling will kick this spring off in similar fashion.”

According to Just Rolling’s trainer, a reappearance over 1500m at Morphettville in a fortnight is on the cards before a tilt at the Listed Morphettville Guineas over 1600m on 8 September.

“If he comes through both of those races we’ll then head to Melbourne where there are a number of options including the (Group Two) Bill Stutt Stakes (won by McEvoy’s Hey Doc in 2016) and (Group One) Caulfield Guineas (13 October),” McEvoy reveals.

“I’ve had a huge opinion of Just Rolling from day one … he was the No. 1 seed in Melbourne – the best colt in the sale by a long way. I didn’t even have an ‘order’ for him and bought him purely on spec.

“I eventually filled him but then someone dropped out at the last moment and Aquis Farm took up 25%. He’s a very good colt. I’ve got another Sebring (Vinland) who showed plenty of promise, but this horse has impressed me from the start and while I thought he would get up and going as an early 2YO, we’ve just had to be a bit patient and now he’s really beginning to show us what he’s capable of.”