A Keen Array For Pilkington And Co. 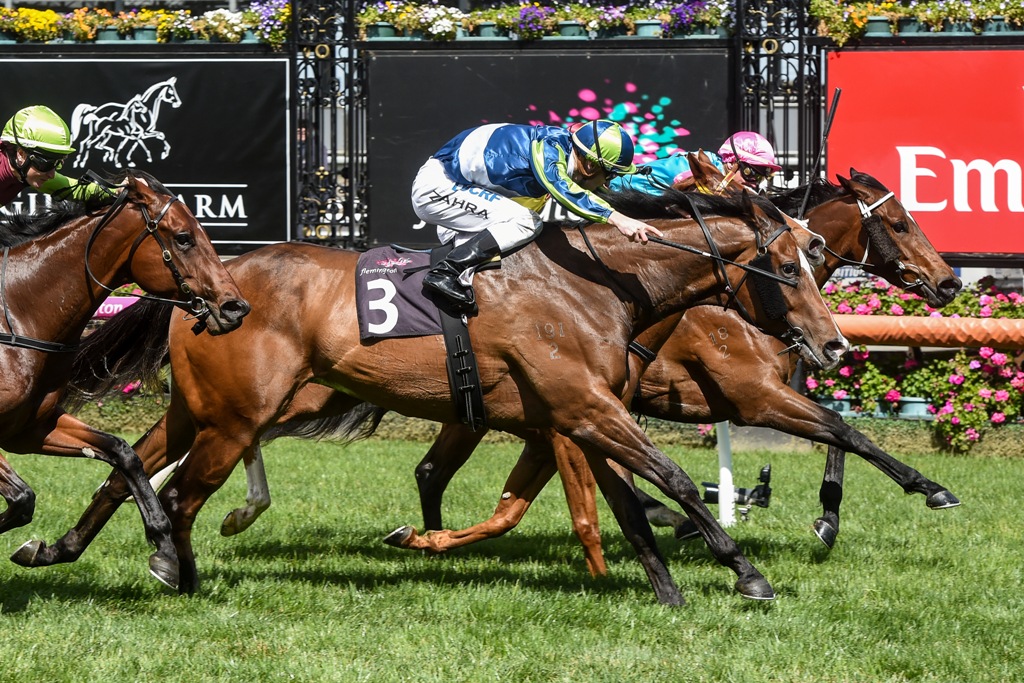 It certainly was a thrilling day of racing at Flemington on Saturday. Quite apart from Winx’s demolition job in the fifth – the Turnbull Stakes – the previous four races had seen first and second separated by less than a length.

Even closer still in the Group Two Gilgai Stakes down the Flemington ‘straight six’ with front runner, Keen Array, hanging on like granny’s tooth to win by the barest of margins.

Keen Array’s part-owner, Mark Pilkington, could have done without the near heart attack, but a few stiff drinks later, was mightily happy with the result.

“He (Keen Array) has been a terrific horse for us,” Pilkington points out. “The Gilgai was his first Group win, but he’s won three other stakes races – the Blue Sapphire, the Italktravel and last year’s Testa Rossa – and has seven wins overall for $837,950.

“He went close to winning the 2015 (Group One) Coolmore Stud Stakes when he was second to Japonisme after running down the worst part of the track and he’s had some ordinary luck in other races too. He finished off his last campaign with a good run in the (Group One) Winterbottom in Perth and the form out of that race – Sheidel, Malaguerra and company – has held up pretty well, while his two runs at Moonee Valley in August and September were pretty promising.

“Both (trainer) David Hayes and I thought his run in the Testa Rossa two weeks ago was fairly disappointing and we toyed with the idea of running him in a 1400m race as we reckon he’ll get further, but ended up keeping him in the Gilgai and, fortunately, he got the chocolates.”

A 5YO gelding by Bel Esprit, Keen Array was bred by Oliver Wong and originally passed in for $25,000 at the 2014 Inglis Melbourne Premier Yearling Sale. Wong – who also raced 2015 Group One ATC Oaks winner Gust of Wind – decided to race Keen Array, but sadly passed away after the horse had only raced twice.

“I’d seen Keen Array at Lindsay Park a few times and was really quite impressed with him,” Pilkington adds. “So, when the opportunity came up to purchase the horse I didn’t hesitate and formed a syndicate with some good friends. It’s been a good result.”

That it has. Pilkington, who also formed the popular ‘Horse Training Packages’ company a few years ago, urged Darren Thomas to take a share in Keen Array, and the speedy neddy carries the increasingly familiar navy, white, lime green colours of Thomas’s Seymour Bloodstock.

“Darren is CEO of Thomas Foods International, Australia’s largest meat processing company, and is an avid investor in the Australian thoroughbred industry,” Pilkington adds. “Darren is also a partner in my Horse Training Packages company and last year purchased the former Newlands Stud in Victoria’s north east, which has since been leased to Woodside Park.

“Darren has 30 mares in his boutique band which includes Gavroche, the dam of last week’s Breeders’ Plate winner, Performer, who we sold for $450,000 at the Gold Coast Magic Millions Yearling sale through our friends and breeding advisors at Newhaven Park.

“Other top flight race mares include Gregers, Don’t Doubt Mamma and Zurella who were traded through the mare sales this season, so Seymour Bloodstock is having success on both sides of the sales rostrum, as well as on the track.

“Apart from Keen Array we’ve got Salsamour who is showing a lot of promise and was second in the (Group Two) Stutt Stakes a little over a week ago, a smart filly called Snogging, another classy filly with John Sargent named Luvaluva, Melbourne Group winner Merchant Navy and Woulda Thought So.

“He (Woulda Thought So) is by So You Think and won his maiden at Ballarat last Thursday. He is being set for the (Group Three) Carbine Club Stakes at Flemington on Derby Day (4 November) and he’s particularly exciting.

“We had a couple of drinks to celebrate on Thursday night after the Ballarat win and I woke up the next morning with six missed calls from people in Hong Kong looking to buy him.”

“Sun’s 2YO colt, Grand Challenge, dumped his rider, Mark Zahra on the way to the barrier for the Listed Maribyrnong Trial Stakes at Flemington and ended up being a late scratching,” Marshall explains. “A disappointing result to say the least, but fortunately no harm done to either Grand Challenge or Mark.

“So, it was a particularly good result when Keen Array added another stakes victory to his tally and it illustrates what a great sire Bel Esprit, continues to be.

“After eight successive state sires’ titles in Victoria, he now stands at our Queensland farm where’s he been very popular.

“The Gilgai also saw a great run from Malibu Style, who is by our headline stallion in Victoria, in Magnus. Malibu Style is a stakes winner in Perth and Melbourne – the Bel Esprit Stakes ironically – and I wouldn’t be surprised if he ends up snaring a Group race this spring based on his Gilgai performance.”

HOOFNOTE: The Gilgai Stakes (registered as the Baguette Stakes and known as the Rupert Steele from 1987-1998) is named after the Victorian farm of Rick Jamieson, breeder of Black Caviar, whose sire, Bel Esprit, is also sire of Keen Array.