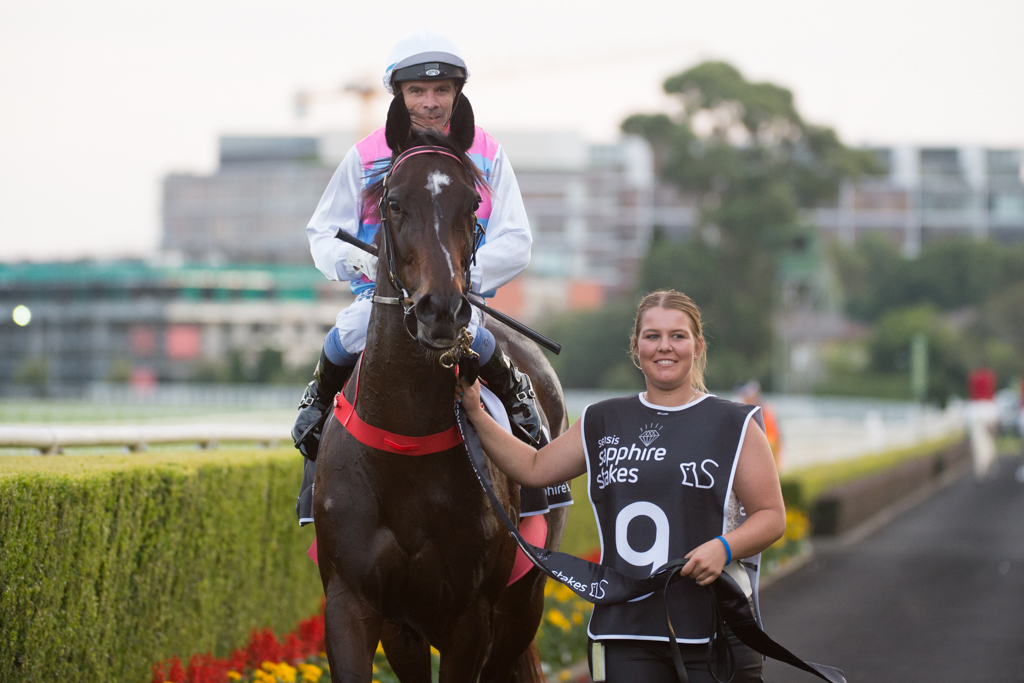 It was the last race on the program. Race 10, the Group Two Sensis Sapphire Stakes at Royal Randwick on the second day of the rich Championships carnival.

Little known Wyong trainer, Kristen Buchanan, was there mixing it with the folk from the big smoke, starting her 7YO mare, Two Blue, against the likes of recent Group One winner Griante, multiple stakes winners Cradle Me and Bring Me The Maid and a 6-time black type winner by the name of Bounding. Sultry Feeling was coming into the race having won her last two races at stakes level.

So, it’s fair to say that competition was tough and, although Two Blue was consistent – five seconds in stakes races – she had yet to crack a win in the big time.

For Buchanan, who started training at Wyong “around six or seven years ago”, this was a dream come true. In fact, when she woke up on Sunday morning, Buchanan was worried it had all been a dream.

Winning a Group Two on such a big race day is something Buchanan could easily get used to, but is more than happy in the meantime to ply her trade with the 20 or so she has in work.

“I’m about 10 minutes from Wyong and just float them down to work,” Buchanan points out. “Two Blue spends most of her days roaming around a paddock on the farm.”

A far cry from the hustle and bustle of a city track.

Buchanan is no stranger to city life and did work in Sydney for Iskander Racing (“a great experience … I learned a lot”) and had previously spent 10 years in Perth, breaking in and pre-training for some leading trainers: riding a bit of work too.

But Buchanan was Central Coast (NSW) born and bred and when looking to do her own thing, decided to hang out her shingle at Wyong.

“It was tough to begin with – you kind of come in cold,” Buchanan adds, but when word of her success with some modestly bred types started to emerge, so did the patronage.

“I’m really happy for Two Blue’s owners … they are an awesome bunch of guys. They’ve taken a real chance on this mare, but she’s a couple of lengths better this time in and it showed on Saturday.”

Mackay is a a fifth generation member of the family run property, established in 1838 and based at Dungog in NSW, explaining that Cangon Stud has been focussing on the thoroughbred side of things for the past decade and currently stands two other stallions – Choistar and Ad Valorem – alongside Dubleo.

“The win of Two Blue was a tremendous boost for Dubleo who stands at a fee of just $4,400. He produces plenty of winners and has a lot of young horses coming through, but Two Blue really brings attention to what he’s capable of.”

Two (Blue) things are for sure: you don’t need a big stable or a big budget to play at the big end of town.