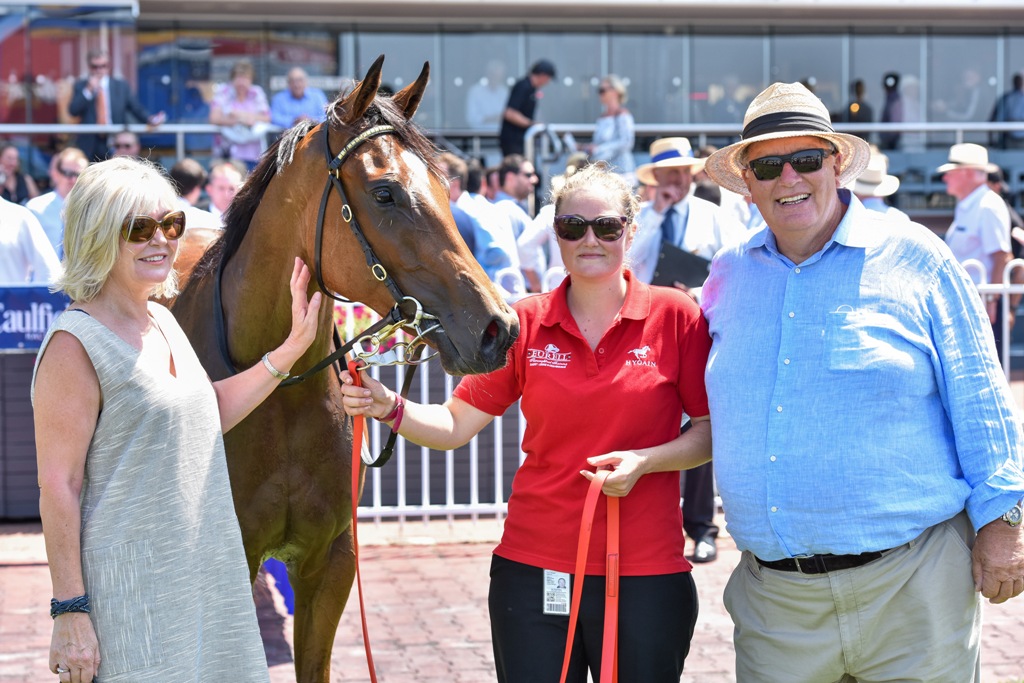 Early days to be sure, but it is probably fair to label Saturday’s Group Three Ladbrokes Blue Diamond Fillies Preview winner, Lady Horseowner, as something of a ‘giant killer’.

After all, when making her debut over 1000m at Moonee Valley on 8 December, the filly lowered the boom on $1.8 million filly, Al Naifa – a half sister to Champion filly, English – and was at it again in the Blue Diamond Fillies Preview, holding out some heavy hitters in a determined finish to the 1000m scamper.

Truth be known though, practically everything is a ‘giant’ compared to Lady Horseowner.

Last time they pulled out the measuring stick, the youngster barely made it to 15.1 hands.

There is clearly nothing wrong with the measure of the motor though, or as Chris Bakker of Lauriston Park is keen to point out, “it’s not the size of the dog in the fight, it’s the size of the fight in the dog”.

Lady Horseowner was foaled down at Lauriston Park – spread over 250 acres at Euroa in Victoria – on behalf of Paul and Carol King and Bakker couldn’t be happier for both the horse and her breeders/owners.

“My wife, Kathie, and I worked for Denis Marks of Let’s Elope fame before we started Lauriston Park around 10 years ago,” Bakker points out. “It was through Denis that we met Paul and Carol and they were, in fact, among our first clients.

“They’re having a good run with their horses at the moment and to have a genuine Blue Diamond contender with Lady Horseowner is terrific. They’re great people and, for us, it justifies everything you work toward in this industry.”

“She was only a plain, little filly but she was well balanced and doesn’t carry much weight on her,” Bakker reveals. “She’s a great result of what you can expect if you treat them right and manage them correctly. She went without a break from the breaking in stage to her first start and only had a short let up between runs.

“She really keeps on defying the odds and fingers crossed she can do it again in the Blue Diamond.”

Paul King said he will be guided by trainer, Greg Eurell, as to whether he will pay the $55,000 late entry fee to get Lady Horseowner into the Diamond, but is definitely looking forward to giving the filly a shot.

“You know, she’s surprised us all the way through … she’s just so tough,” a proud King enthused. “And that’s probably one of the greatest things about this industry. You don’t know how they’re going to turn out … early on, if I’d been asked to give one away, it would have been her. Not much to look at and small, but turns out she’s all heart.

“I hope we get the chance to run in the Diamond. It’s not often you get these type of opportunities, but you also have to believe the horse can win it. For mine, the 1200m of the Diamond should be right up her alley.”

“Chris and I bred and race (multiple city winner) Dusty Jack and also race Raindrops on Roses, a High Chaparral mare out of Let’s Get Famous who is a daughter of (Australian Horse of the Year) Let’s Elope,” King explains. “I should end up with around five or six mares to breed from this spring.