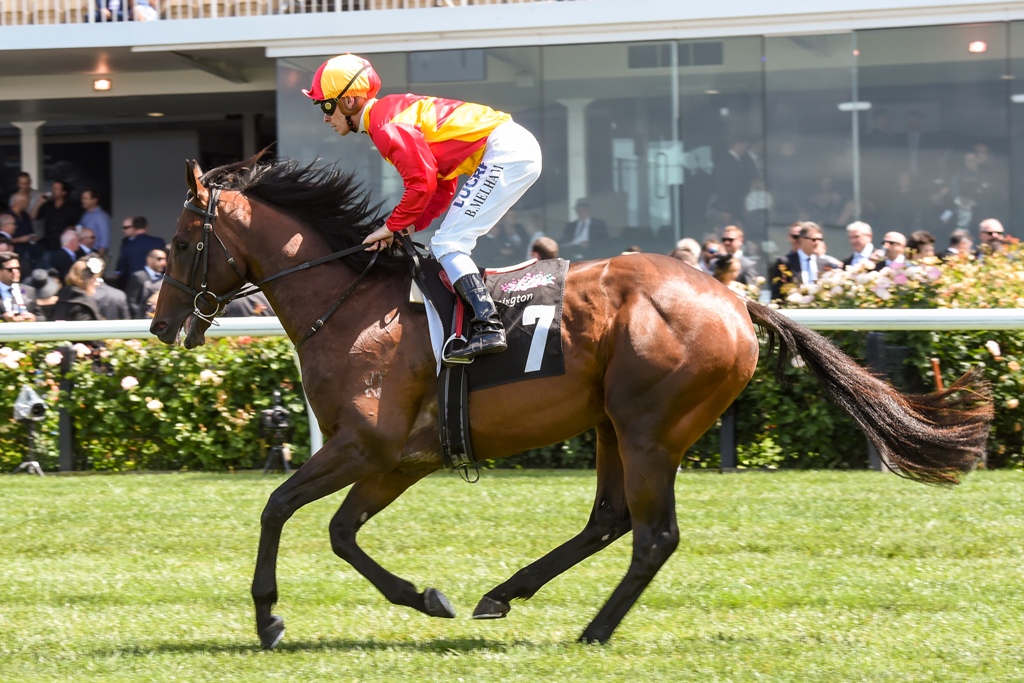 Levendi heads to the barriers for the Gr.3 Carbine Club Stakes (Racing Photos)

Bruno Micalizzi is the first to count his blessings.

The affable fisherman, come racehorse owner, come thoroughbred breeder has gotten off to a flying start since attending the 2013 Inglis Melbourne Premier Yearling Sale and buying a Magnus colt for $32,000. The first horse he’d bought outright.

And not a bad first horse by any stretch with that yearling, subsequently named Malaguerra, winning two Group Ones – the BTC Cup and Darley Classic – and over $1.7 million in stakes.

Perhaps a second Darley if the 6YO lines up in this Saturday’s $1 million flyer.

It would serve as a memorable ‘book end’ for Micalizzi whose exciting colt, Levendi, launched the 2017 Melbourne Cup carnival by capturing the Group Three The Carbine Club Stakes over 1600m at Flemington on Saturday.

Sent out as favourite, Levendi struck trouble in the run, but really hit his stride over the closing stages to notch up his first black type victory.

The Pierro colt has now won three of his five outings for $199,650 in earnings.

“It was a gutsy win and a great ride by Ben Melham,” an elated Micalizzi points out. “He’s had some bad luck with barrier draws and during the course of running this time in, but he managed to put it all together on Saturday.

“It’s up to Peter and Manny (Gelagotis), but he’ll probably head out to the paddock for a nice, long spell and come back for the autumn. He’s got a lot of raw ability but needs to develop a bit more mentally.”

Levendi is out of the stakes placed mare, Lipari, in turn a daughter of Group One SAJC Australasian Oaks winner, Tully Thunder, and was snapped up by Gelagotis Racing for $140,000 from the Widden Stud draft at the 2016 Gold Coast Magic Millions Yearling Sale.

“I’m in the colt with the Gelagotis boys and there’s also a couple of other Greek guys in it as well,” Micalizzi adds. “The name, Levendi, comes from the Greek for ‘honourable young man’ which he certainly turned out to be on Saturday.”

Micalizzi has also turned his hand to the breeding and got his first foal recently when Starspangledbanner mare, Grand Gesture – a close relation to Malguerra – foaled down a Magnus filly five weeks ago.

The proud ‘father’ reckons she’s a “cracking type” and is quite happy with his initial foray into the breeding caper.

“Grand Gesture is my only mare, but I’ve also got interests in around six racehorses. It’s probably more than I’d first intended, but I’m loving it and, as my son always tells me, ‘if you don’t risk it, you don’t win the biscuit’!”

Levendi capped off a tremendous 24 hours for the colt’s breeders, Rob and Deb Anderson, who were also represented in Japan on Friday by Group Three Kyoto She Fantasy Stakes winner, Beluga.

A 2YO filly by Australian-bred, Japanese based sire, Kinshasa No Kiseki, Beluga was having her first run since winning a maiden in August.

Beluga is the first winner in Japan for the Andersons who were granted a JRA owners licence last year and have two horses in work up there.

The Andersons were also front and centre on Derby Day three years ago when their home-bred, Bonaria, won the Group One Myer Classic.

Meanwhile, the Carbine Club also got Coolmore off to a flying start at Flemington with the stud represented by six winners overall on the Derby Day program: two Group One winners by Fastnet Rock, a Group One winner and Group Three winner by the deceased High Chaparral, and one with Pierro.

“It’s been a great spring so far for Pierro and he’s already one of the leading sires of 3YO stakes winners in the country,” Coolmore Australia’s Sales & Nominations Manager, Colm Santry, reveals. “Levendi’s win was a well deserved as he was unlucky in the Guineas and didn’t have the most straightforward of passages on Saturday, but ultimately showed Pierro-like tenacity in the finish.

“He (Levendi) is a very good looking horse and has loads of scope for development into the autumn.

“Obviously, a huge part of Pierro’s appeal is that his pedigree is Danehill-free, so it’s incredibly promising that he is showing such early prowess when mated with Danehill-line mares. Levendi, Tulip and Satin Slipper are all out of granddaughters of Danehill.”