Lucky Bowls Them Over In Hong Kong 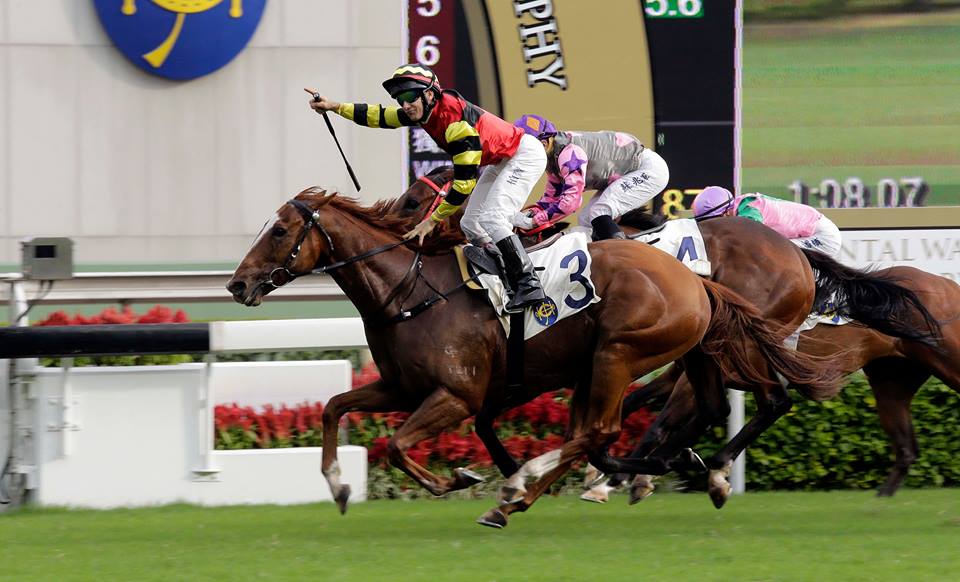 It took the world’s best sprinter to deny him last time, but Australian-bred, Lucky Bubbles, wasn’t playing second fiddle to anyone at Sha Tin on Sunday night, capturing the HK$4 million Group Two Premier Bowl Handicap in an awesome display of firepower.

The margin wasn’t a true reflection of the end result as the son of Sebring was travelling well under the riding of expat, Brett Prebble, and looked a winner a fair way from home.

Back in May, Lucky Bubbles almost stole the show from a red hot Chautauqua, who not only raced away with the Group One Chairman’s Sprint Prize, but raced into the top of the world rankings in the process.

There might not have been a Chautauqua at Sha Tin this time and while it was ‘only’ a Group Two, the field of 12 had won over HK$150 million (approx. A$25.5 million) between them and last year’s Bowl – won by yet another Australian bred in Able Friend – was deemed the highest rated race in Hong Kong in 2015.

A winner in Australia before departing to the Hong Kong stables of Francis Lui, Lucky Bubbles has subsequently compiled an impressive record with six wins and four placings from 12 outings.

Lucky Bubbles is by the Widden Stud based More Than Ready stallion, Sebring (22 stakes winners including Horse of the Year, Dissident, Criterion etc.) and is out of the stakes placed Hussonet mare, Bubble Below, closely related to Group Two winners Colorado Claire and Moonovermanhattan.

Bubble Below was bought by Musk Creek Farm in 2013 and her two year-old filly by Stratum sold for $400,000 at Inglis Easter earlier this year to the bid of Woppitt Bloodstock / Mulcaster Bloodstock. She has returned to Sebring this season with the hope of producing a full sibling to Lucky Bubbles.

Lui confirmed post race that Lucky Bubbles will next run in the Group Two Jockey Club Sprint on 20 November before “taking on the world” in the HK$18.5 million Group One Hong Kong Sprint on 11 December.

“There was a bit of pressure before Sunday’s race as everyone expected him to run well fresh, but the horse has lived up to our expectations and proven he’s up to the best in Hong Kong,” a relieved Lui pointed out.

Lucky Bubbles also continues the remarkable success of Rick Jamieson’s Gilgai Farm which, initially, gained much fanfare as the breeder of Black Caviar, but in this year alone is responsible for Group One Newmarket Handicap winner, The Quarterback, Caulfield Cup winner and Melbourne Cup hopeful, Jameka, and now, Lucky Bubbles.

A bargain buy for Hong Kong interests, Jamieson placed Lucky Bubbles in the Three Bridges draft at the 2013 Inglis Melbourne Premier Yearling Sale where he was eventually knocked down for $90,000.

Three Bridges’s Toby Liston remembers the colt well: “That was a very good sale for us overall … we also sold (Group Two) Alister Clark winner, Chill Party, and the stakes winners Exclusive Lass and Japhils in Melbourne, along with Supido – which was also bred by Gilgai and is Group One placed behind Black Heart Bart.

“Lucky Bubbles wasn’t a big horse by any stretch, but he had a lot of character. He was eventually bought by Ricky Yiu who said he really liked the (then) colt’s attitude.

“He only made $90,000, but I’m sure there are a few people now regretting that they didn’t keep bidding.”