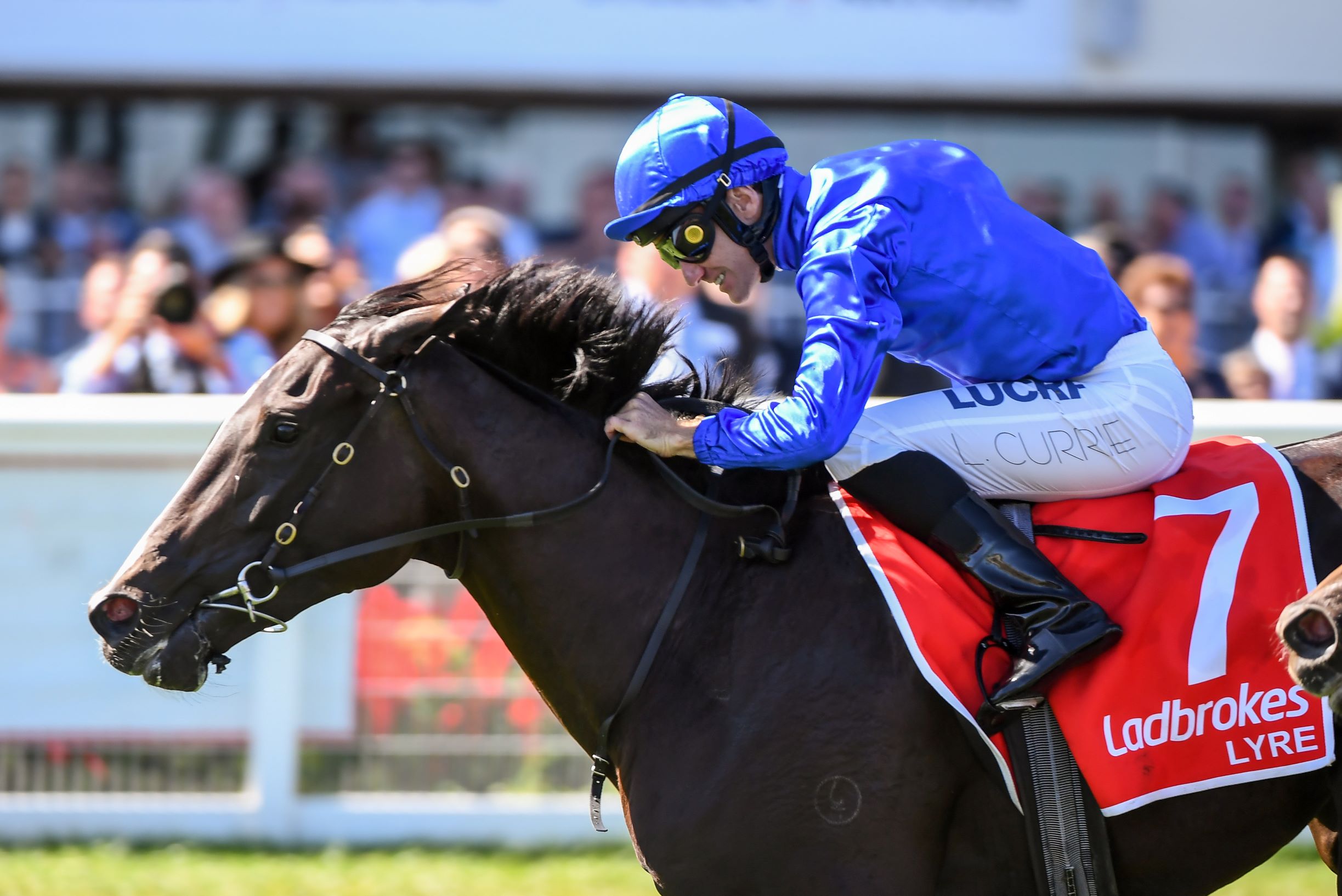 It was, by any standard, a truly remarkable day.

It’s important to remember though, the juggernaut that is Godolphin had hardly flooded the Caufield fields. Nine runners overall for two Group Ones, a Group One second and a Group Two: only one starter failed to finish in the top four.

It’s hard to remember a time when Godolphin didn’t have an impact on Australia’s racing and breeding landscape.

Godolphin had certainly made its presence felt in Australian racing for decades (primarily through numerous Melbourne Cup contenders), but only really established a hoofhold in May 2008 with its acquisition of the then dominant Ingham brothers’ Woodlands empire.

And the influence of that baton passing has never been more evident than Saturday’s $1.5 million Group One Ladbrokes Blue Diamond Stakes over 1200m at Caulfield.

Although Athiri would be sent out the $4.80 equal favourite in the Diamond for Godolphin’s head trainer, James Cummings, it was the Anthony Freedman prepped, Lyre, who won the day with a sizzling performance.

Lyre becomes the 12th Group One winner for the much loved, Lonhro (81 stakes winners overall) who won a massive 11 Group Ones for the Inghams, racing in the similarly famous all cerise silks (a lesson there folks … one colour!).

Lonhro’s oldest were autumn 2YOs when the Inghams handed over the flame.

However, Lyre’s dam side is similarly intriguing. In 2004 at the Inglis Australian Easter Yearling Sale, the Inghams forked out $400,000 for an Encosta de Lago filly from a Melbourne 2YO stakes winner, My Juliet.

That filly would race as Mnemosyne and she was some racehorse alright. Winning the Thousand Guineas and Queen of the Turf – both Group Ones – Mnemosyne would capture three more Group races and place in a further six black type events (three at Group One).

However, everything she has done on the turf she has matched in the breeding shed for Godolphin with Impending (by Lonhro) winning two Group Ones (Stradbroke and Kingsford-Smith), Epidemic (also by Lonhro) a stakes race in Sydney and Forget the Group Three Cameron.

All up, five winners from six to race: her only ‘miss’ being the Hawkesbury placed Erato … dam of Lyre.

But while we’re getting used to seeing James Cummings front and centre after a big Godolphin victory, it was Anthony Freedman who was facing the cameras after the Blue Diamond.

“They (Godolphin) spoke to me in the middle of last year and said ‘we are going to send you some yearlings’ which was a bit of out of the blue,” Freedman said, clearly with no pun intended. “I’ve ended up with five 2YOs but Lyre is the only one to race so far.

“The relationship with Godolphin goes back 15 to 20 years … we’ve remained very good friends and, when Vin Cox (Godolphin Australia’s Managing Director) came along he pushed for me to get some yearlings and it’s worked out great.”

Cox elaborates: “Anthony is our only other trainer in Australia outside James (Cummings) and he’s always done a fantastic job with his horses.

“Despite the long association with Sheikh Mohammed he’d only had a couple of ours in recent years, but the outside stable gives us a point of difference and the Freedmans certainly delivered on Saturday.”

After starting out with Inglis and then operating as a bloodstock agent, Cox was Managing Director of Magic Millions for a decade before taking up the reins at Godolphin early last year … and he is more familiar than most that success doesn’t come ‘overnight’ in the thoroughbred industry.

“We’ve been involved with some great families in Australia: Accessories (dam of four stakes winners including Helmet and Epaulette – both standing at Godolphin’s breeding arm, Darley), Camarena (dam of Camarilla, granddam of Guelph and great granddam of Encryption) and Essaouira (dam of Alizee and Astern), but they don’t come much better than the Mnemosyne influence.”

With over 4,000 horses worldwide and stables in Australia, England, Ireland, France, Dubai, the United States and Japan, Godolphin employs 350 staff in Australia.

And, after starting the calendar year with a memorable victory in the $2 million Magic Millions 2YO Classic via Exhilarates, four of the five Group Ones run thus far in 2019 have all been Godolphin ‘conceived’.

“We had a very good Epsom day a few years back,” Cox points out, “but Saturday at Caulfield was truly special and won’t be forgotten for a long, long time.”