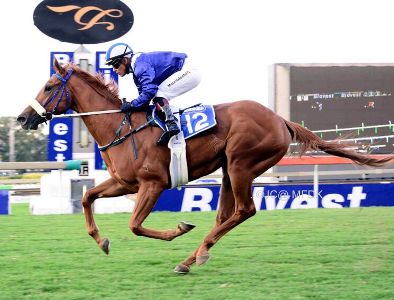 Despite having to carry 60kg, the three-year-old Magic Albert gelding Suyoof took his record to two wins and a second from three starts in South Africa, winning the Listed Secretariat Stakes (1400m) at Turffontein on Saturday.

The only time he has been beaten was by Johan Janse Van Vuuren’s more experienced runner, and fellow Australian-bred Brazuca, with that horse narrowly defeated in last season’s Group 1 Golden Horseshoe.

Bred by a large group consisting of Yarraman Park Stud Pty Ltd, Breeding Capital Australia 2011, Moody Racing and A Nicoll, Suyoof was offered in the Yarraman Park Stud draft at the 2014 Inglis Easter Yearling Sale as part of Session 2 where he was knocked down to De Burgh Equine for $150,000.

Out of the stakes placed Danehill Dancer mare Magic Harmony, the Mike de Kock-trained Suyoof joins Group 3 Sandown Stakes winner Charmed Harmony (Hussonet) as the second stakes winner for the mare who has had four winners from five to the races.

From the family of last season’s Victorian leading first-season sire Reward For Effort and the Group 1 Golden Slipper winner Overreach, Magic Harmony was on sold by Yarraman Park at the 2013 Inglis Broodmare Sale when secured by Belmont Bloodstock carrying a positive to Emirates Park’s Dream Ahead.

Named Tranquil Harmony, the Dream Ahead filly is in the stable of Melbourne trainer Rod Griffiths, while the mare has a yearling colt by Lonhro’s Group 1 winning son Denman.

The next winner at the meeting saw four-year-old High Chaparral gelding Shea Devon record his third win from 10 starts when stepping up to the 2000m.

Trained by Gary Woodruff, Shea Devon was an $80,000 Inglis Weanling Sale purchase from the draft of Coolmore Stud, before secured by Paul Guy’s Heritage Bloodstock for $100,000 at the Inglis Premier Yearling Sale when consigned through the draft of Phoenix Broodmare Farm.

Out of a half-sister to a Champion stayer, Shea Devon should appreciate a trip and with victories over 1600m, 1800m and now 2000m, it would be no surprise to see him now flourish as he races over even further.

Taking her second win from five starts, Sean Tarry’s Tiger’s Touch rounded out the Turffontein trio, winning by a length and a quarter over 1160m.

Bred by Larry Nestadt and Bernard Kantor, Tiger’s Touch joins last week’s Listed winner Supertube, being bred in Australia by the then Evergreen Stud-based Where’s That Tiger, who himself has now been exported to stand in South Africa.

Out of the Red Ransom mare Sogha, Mooghamir is a full-brother to South Africa’s Champion Two-year-old filly Mahbooba, who like her brother, was foaled and raised at Coolmore Australia.