Mel’s Way And The Highway 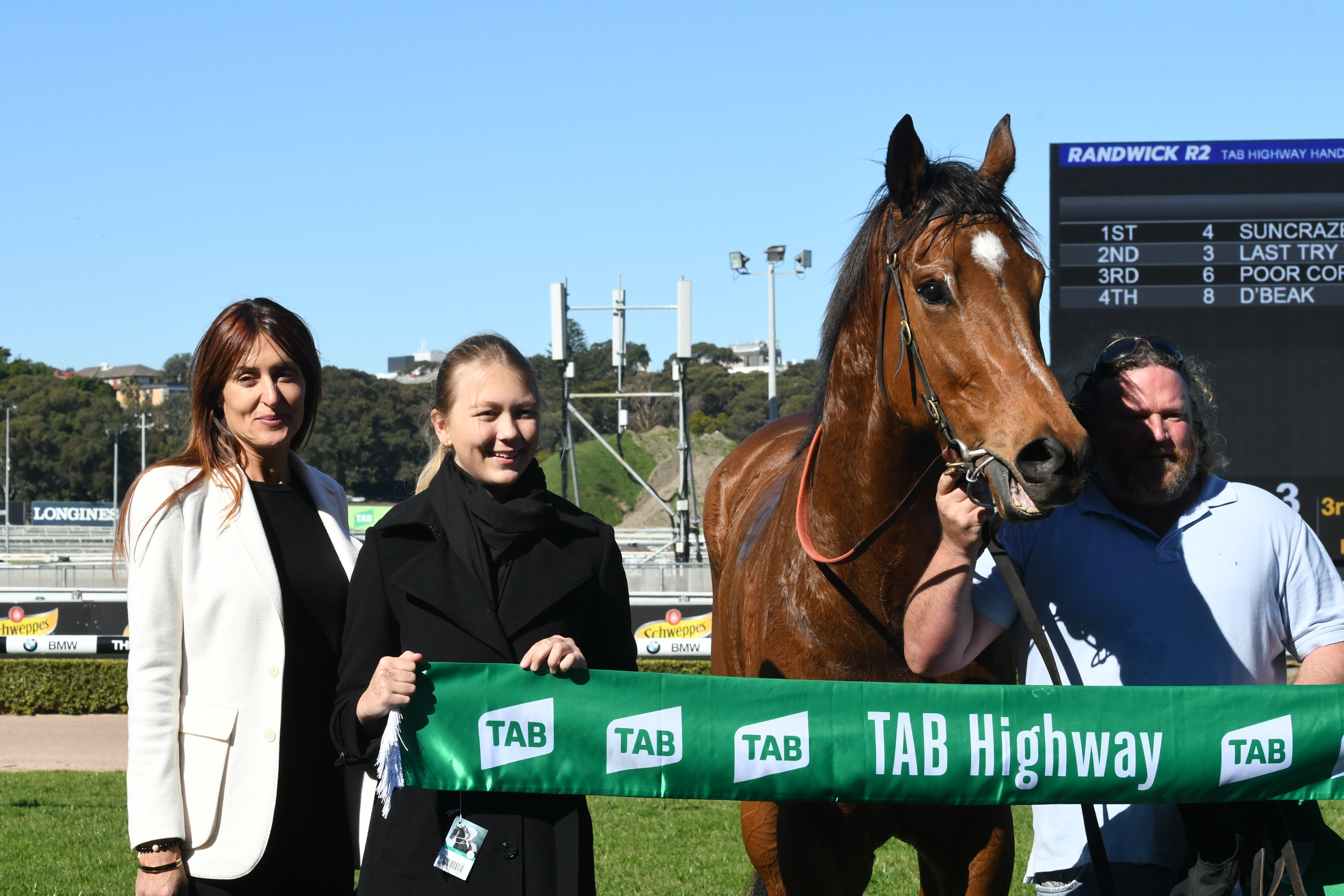 After winning by five lengths on debut last August – over 1120m at Dubbo – Suncraze filled the runner-up pozzie at Tamworth, Scone (twice), Randwick, Newcastle and Warwick Farm, before heading to the 1400m TAB Highway Handicap at Randwick on Saturday.

This time however Suncraze … O’Gorman … breeder/owner, Anthony Gow-Gates … and jockey Corey Brown, weren’t to be denied and the now blinkered galloper sailed home down the outside to record a resounding victory. By three lengths thank you very much.

“It was getting pretty frustrating,” O’Gorman explains, “but I didn’t think we were doing anything wrong. I told Anthony (Gow-Gates) that it was just a matter of time and he certainly put it all together on Saturday.

“We’ll wait and see what Benchmark figure he gets after winning the Highway but we have a couple of options. There’s another 1400m Highway in early September, but I’d also be keen on the Anniversary which will be run under Benchmark conditions on the Everest undercard (14 October).

“He (Suncraze) is not a hard horse to keep up and actually loves the routine of the stable, so he’ll probably just need bit of a freshen up.”

O’Gorman is based at the Miller family’s Erin Park, around 15 minutes drive from the Tamworth racecourse, where she has a handful of horses in work.

“I’ve been breaking in and pre-training for quite a while, originally based at Camden, then at Scone, before shifting to Tamworth,” O’Gorman adds. “It’s a terrific facility at Tamworth, plus I’ve got everything I need at Erin Park.

“I have about three or four racehorses in full work at the moment, but there’s actually about 15 to 20 going through their paces as I have a number of youngsters I’m preparing for the Inglis and Magic Millions breeze ups in October. I love doing the breeze ups.

“I’ve broken in and pre-trained for a number of leading trainers, as well as for overseas clients, and had quite a few good horses along the way, but I decided to take out my trainers’ licence some two and a half years ago and it’s been working out well. Even better after Saturday!”

Bred by prominent bloodstock insurer, Gow-Gates, Suncraze is by Henrythenavigator, who stood four seasons at Coolmore in Australia before returning to Ireland after his 2012 stint. Suncraze hails from that final crop and with Henrythenavigator’s 15 stakes winners including Irish Group One winners, Sudirman and Pedro The Great, the stallion’s best runner locally is last year’s Perth Group winner, Lite’n In My Veins.

Meanwhile, Suncraze is out of the unraced Xaar mare, Sunstyle who has three winners from as many to race – two of those in town. And for one elated Victorian stud master in Larneuk’s Neville Murdoch, she’s proven to be a bargain buy at just $700 (in foal to Teofilo) when snapped up from the 2014 Inglis Weanling & Broodmare Sale in Sydney.

After producing a Teofilo colt (an unraced 2YO in New Zealand called Rhinestone Cowboy), Sunstyle then missed to O’Lonhro, produced a colt last spring by Cluster and is now in foal to Ilovethiscity.
“Suncraze is a very good horse and that was a great win on Saturday,” Murdoch enthused. “(New Zealand trainer) Murray Baker has told me that Rhinestone Cowboy is a Group One horse, while the Cluster colt is a cracking type too. I’ll be sending Sunstyle to my new stallion, Wolf Cry this spring.”

(A Group Two placed son of Street Cry, Wolf Cry is out of a stakes placed Redoute’s Choice mare, Starfish, in turn a half sister to the stakes winning 2YO, Brilliant Bisc, who was sold for $600,000 at the Turangga Stud Dispersal on Sunday).

Adding another stallion to the Larneuk roster this week via the arrival of Honorious – a Group winning half brother to South African Horse of the Year, Igugu – Murdoch is well aware of the swings and roundabouts in the thoroughbred industry, but is still marvelling at his good fortune with Sunstyle.