In The Navy … Coolmore Winner Wanted As New Recruit 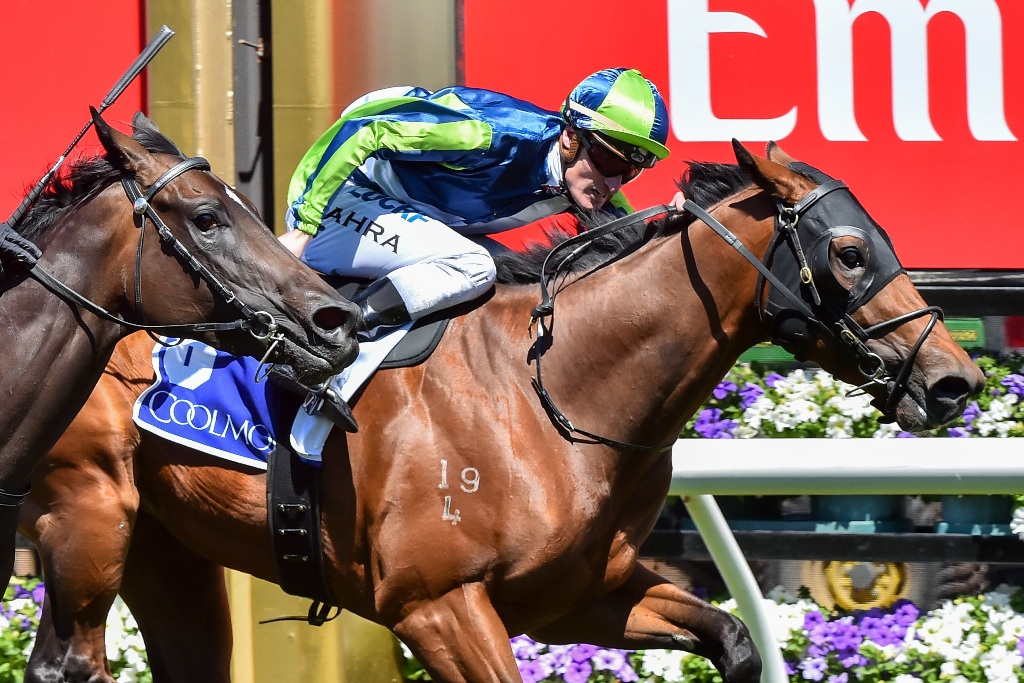 Merchant Navy adds his name to the honour roll in the Group One Coolmore Stud Stakes (Racing Photos).

Winning a Group One race of any creed or colour is a tremendous feat. It’s the thoroughbred industry’s answer to the Holy Grail.

But even among the creme de la creme, there are some Group Ones that are more equal than others.

Take the Group One Coolmore Stud Stakes on the first day of the Melbourne Cup carnival, for instance.

The 1200m dash down the Flemington straight has long been considered a sire making race … a gateway to untold riches if the winner turns out to be a 3YO colt.

Recent heroes such as Flying Artie, Brazen Beau and Zoustar were all despatched to various studs following multi-million dollar deals, while other Coolmore winners in the last decade – such as Northern Meteor, Sepoy and Star Witness – have already underscored the race’s impact on breeding sheds.

Merchant Navy added his name to the roll in Saturday’s Coolmore, taking his place in history in spectacular fashion: weaving a passage over the final 100m to catch tearaway leader, Invincible Star, right on the wire.

Even better still for connections, Merchant Navy has the pedigree to match his talent for speed.

A son of the Champion Sire, Fastnet Rock – who doubled up just 40 minutes later when his daughter, Shoals, captured the Group One Myer Classic over 1600m – Merchant Navy is out of the Group winning Snippets mare, Legally Bay.

Multiple Group One placed as well, Legally Bay has produced seven winners all up, including Sydney stakes winner, Jolie Bay, and is, in turn, a half sister to 2014 Group One Myer Classic winner, Bonaria.

Bred by Chris and Jane Barnham, Merchant Navy was offered by Segenhoe Stud at the 2016 Inglis Australian Easter Yearling Sale where he was knocked down to Ciaron Maher Racing for $350,000.

That sounds like a lot of money to the $1 each way punter, but excellent value (especially now!) when you consider nine yearlings at Easter ’16 were knocked down for seven figure sums: including two by Fastnet Rock.

Saturday’s Group One was Merchant Navy’s sixth outing, having won the first four – including the Listed Anzac Day Stakes and Group Three McNeil Stakes – before his sole failure when 10th of 14 in the Group One Golden Rose on 23 September. His earnings now sit at $809,450.

Part-owner, Darren Thomas, whose increasingly familiar Seymour Bloodstock – navy blue, white and lime green – colours are carried by Merchant Navy, certainly reckons the colt was worth every cent of the yearling sale ante.

“What a terrific racehorse he is and what a great day it turned out to be,” Thomas enthused. “Apart from Merchant Navy, we had Luvaluva win the Group Two Wakeful Stakes (and is now favoured to become, on Thursday, the 36th filly to capture the Wakeful/VRC Oaks double), while Lady of Crebilly also won at Morphettville.

“What made it even more special is that I had a couple of close mates with me on Saturday so it’s not a day I’m going to forget in a hurry.”

“Coming from the meat industry, I’m a born trader and Mark and I buy and sell quite a few. I recently purchased what was formerly, Newlands Stud, at Nagambie in Victoria, while I’ve currently got around 15 to 20 racehorses in work, along with 30 broodmares.

“Mark does a great job with the bloodstock portfolio and it’s really producing the results.

“I’ve got a great passion for this industry and days like Saturday certainly make it all worthwhile.”

Aside from Thomas, Merchant Navy’s ownership group includes the colt’s breeders, a number of the large Coolmore clan, and perhaps Fastnet Rock’s greatest fan, Peter O’Brien, now the General Manager at Segenhoe after many years as Coolmore Australia’s Stud Manager.

“He (Merchant Navy) was the best foal we had that year,” O’Brien points out. “He is everything I look for in a horse. Great looks, well bred and a terrific demeanour. Straight after Ciaron bought him, I asked if I could stay in the colt and fortunately he said yes.”

And naturally enough, Coolmore was over the moon with the result – especially in a race it sponsors – but also as to how the Derby Day program panned out, with its sires capturing three of the four Group Ones and two other Group races on the nine event card.

“Unbelievable! It’s arguably the best day of racing in Australia and one of the best in the world,” Coolmore Australia’s Paddy Oman enthused. “So for Coolmore stallions being responsible for six Group winners is staggering.

“Fastnet Rock had a stunning day and can lay claim to being the sire of arguably both the best 3YO colt and filly in Australia in Merchant Navy and Shoals. Fastnet Rock has had five Group One winners this year, among 27 stakes winners, bringing his career tally to 31 and 123, which is all the more noteworthy when you consider that he is still only 16 years old. He’s a world-class stallion, a proven sire of sires, an established broodmare sire and his impact is going to be felt for years and years to come.”

Oman admits the day was a tad bitter sweet with High Chaparral’s colt, Ace High, winning the Victoria Derby, while another High Chaparral in Cismontane is a live chance for Tuesday’s Melbourne Cup after capturing the Group Three Lexus Stakes.

“Unfortunately High Chaparral was lost to us too soon, but his legacy lives on and he has enjoyed tremendous success this year as well,” Oman adds. “He’s had four Group One winners among 21 stakes winners and, just for good measure, he has one of the favourites for the Melbourne Cup in the shape of Rekindling.”