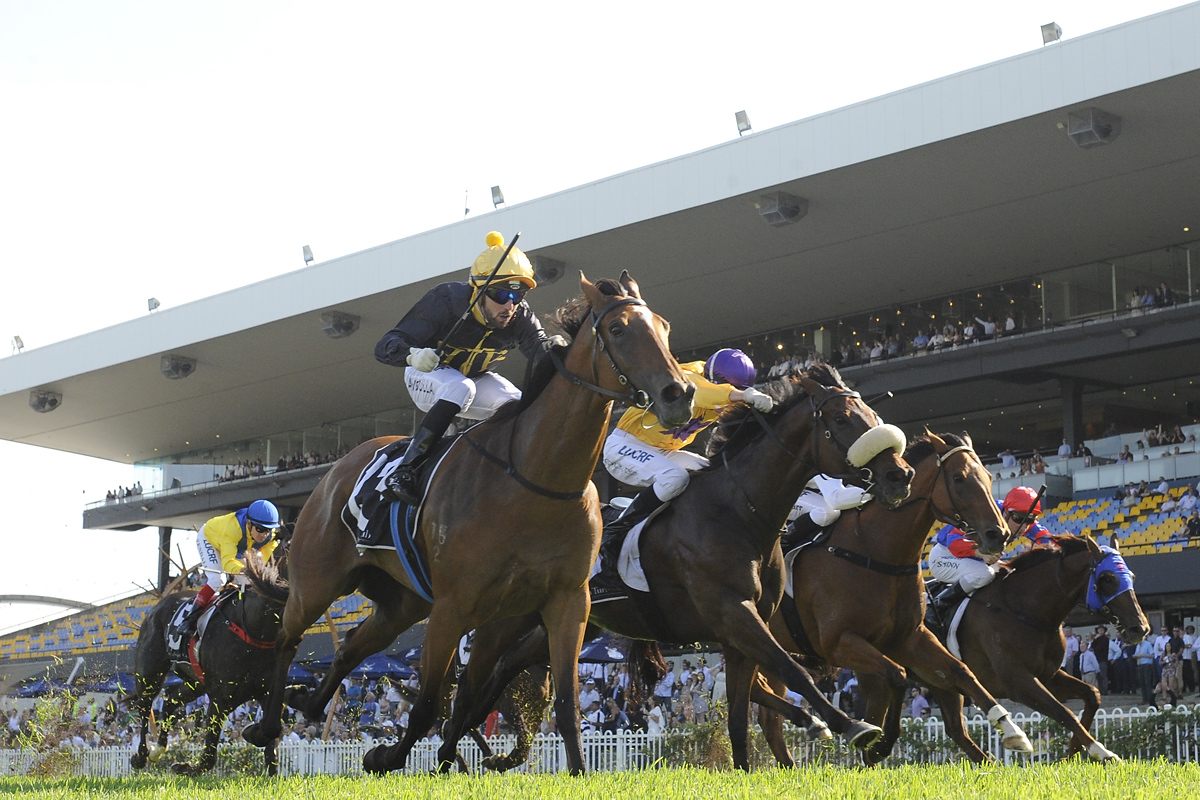 If you can’t find a happy face in the winners’ circle, you’re just not trying hard enough.

Take Sweet Redemption for instance. This mare has a habit of putting smiles on the dials of breeder, syndicator, trainers, jockey and, most importantly, a large ownership group and she was at it again on Saturday when breaking through for her initial black type victory in the Group Three Steel Builders Festival Stakes (1500m) at Rosehill Gardens.

It was the Snitzel galloper’s fifth win from 18 starts (throw in a further eight placings) for nearly $300,000 in stakes and, not surprisingly, her appeal is universal.

“What a terrific mare she has turned out to be,” Bell View Park Stud’s Adam Mackrell enthused. “We (Bell View Park Stud) bred her and prepped her for the 2014 Gold Coast Magic Millions where she was snapped up for $120,000 by Bruce Slade of Round Table Racing and James Harron Bloodstock.

“She was a nice filly right from the word go … rangy type, very athletic. She’s out of a Red Ransom mare (Redeeming Lass) and that cross seems to have nicked well with Snitzel (12 winners including Silver Slipper winner, Chance Bye).

“One of the main reasons I like her though is that she’s so versatile and adaptable … Sweet Redemption has campaigned all over the place: won at Ipswich, won in Sydney, stakes placed in Melbourne, finished second in a Tasmanian Oaks and second in a Goulburn Cup. What a great horse for the owners.”

Bell View Park Stud sold Redeeming Lass (a daughter of Group One winner, Danglissa) at this year’s Inglis Broodmare Sale in Sydney with Mackrell explaining that the farm has altered its business model and will now concentrate on trading mares, along with spelling and pre-training services at its Meroo Meadow property (near Nowra) on NSW’s south coast.

“We’ll have about 25 mares to sell in 2017 and with any sort of luck there might be a few more dams of future stakes winners among them.”

Bruce Slade was quick to praise the skills of training duo, Gai Waterhouse and Adrian Bott, pointing out that the Group success was a worthy result and there will hopefully be quite a few more wins in store.

“Gai and Adrian have done a great job and regardless of where she goes next (a Villiers start in Sydney on 17 December or a Listed race in Brisbane have been mooted) it appears she will target the $1 million Magic Millions Fillies & Mares race at the Gold Coast on 14 January. I reckon she’d have to have a real good shot at the race,” Slade adds.

“It’s an exciting time for the owners. My wife, Natasha, and I set up Round Table Racing for just the one year (2014) before taking up my current role (as Director of Stallions and Sales) at Newgate Farm in 2015. Tash still manages the class of 2014 and I can assure you there are a lot of happy connections looking forward to spending some quality time on the Gold Coast in the new year!

“Even before the Gold Coast Sweet Redemption has already well and truly made a great return on her yearling sale price and that’s not even taking into account her residual as a broodmare.”

Sweet Redemption is Snitzel’s 10th individual stakeswinner this season, and 46th overall and joins Sweet Idea, Wandjina, El Divino and Thronum that have all been trained to black type success by Tulloch Lodge.

Snitzel will have 52 yearlings on offer at the 2017 Gold Coast Magic Millions in January, while a further 52 will be up for grabs at the Inglis Australian Easter Yearling Sale.