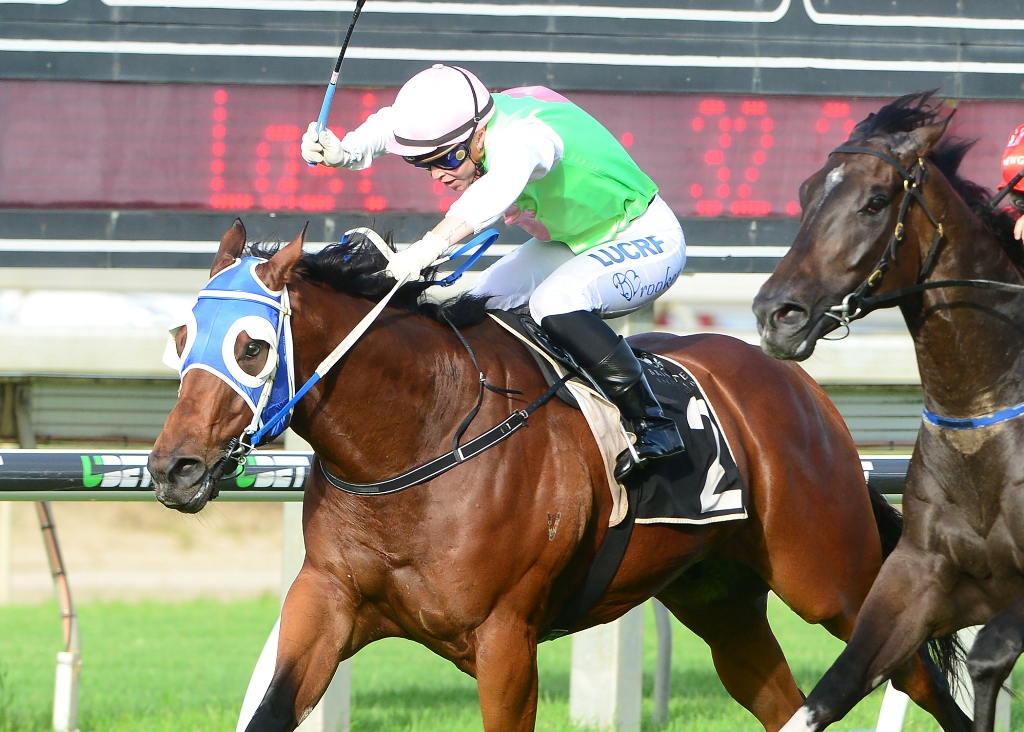 Everyone would love to have a horse like Monsieur Gustave in their back paddock.

The 5YO flyer was at it again on Saturday, capturing the Group Three SUA George Moore Stakes over 1200m at Doomben … his fourth win in succession and all of them at black type level.

He did it the hard way at Doomben too, having to ping from the outside gate and use up plenty of juice to take the early lead. It could well have cost him as only a lip separated he and race favourite, Calanda, at the finish. Hugely impressive.

The George Moore now sits next to a Keith Noud, a Glasshouse and an Eye Liner, with Monsieur Gustave’s overall tally at eight wins and three placings from 17 starts for $535,900 in stakes.

Darryl Dunk doesn’t have Monsieur Gustave in his back paddock per se, but has been involved in the ownership (which also includes wife Susan Buckley) of Monsieur Gustave since the then colt was purchased for only $34,000 at the 2014 Gold Coast Magic Millions Yearling Sale.

“He (Monsieur Gustave) was bought by Jason McLachlan and one of three we got into after that sale,” Dunk explains. “Let’s just say the other two weren’t as good as Monsieur Gustave!

“Anyway, Monsieur Gustave had some problems early on, hence why he’s a 5YO with only 17 starts, but he’s really come together now. After Jason stopped training, we switched the horse to Darryl Hansen and the horse’s form since the start of last season has been tremendous.

“The patience shown with the horse has really paid off.”

Dunk, who is based in Brisbane, has been involved in ownership for quite a few years and currently has shares in seven horses, while he also breeds from a couple of mares.

“My father-in-law used to own Buck’s Pride (21 wins) and we raced a few of his progeny, but Monsieur Gustave is the best I’ve had to date,” Dunk adds.

“We’ve got a couple of interesting 2YOs coming through but they’re shin sore and out in the paddock at the moment. We’re happy to be patient.”

At least Dunk won’t have to wait much longer for Monsieur Gustave’s next appearance as Hansen has mapped out an ambitious Christmas/New Year campaign for the sprinter.

“There’s a $500,000 bonus if he can win the George Moore, the Listed Lough Neagh Stakes over 1350m at Doomben in a fortnight (16 December) and the Listed Buffering Quality over 1350m, again at Doomben, on 30 December,” Hansen explains. “All things being equal, he’ll then tackle the ($1 million) Magic Millions Cup over 1400m at the Gold Coast in January.”

A son of the Aquis Farm based, Al Maher (whose November stakes winners also include Son of Maher, Silverstream and Money Maher), Monsieur Gustave is the pick of four winners from Stravinsky mare, Saigon Moonlight.

Closely related to Horse of the Year, Lankan Rupee, and hailing from the family of Lonhro, Grosvenor et al, Monsieur Gustave was bred by Brian Backshall of John Stuart Investments.

“My wife Noela and I used to have around 10 to 12 mares, but costs were starting to get prohibitive so we sold them, including Saigon Moonlight and Ballet d’Amour, the dam of Russian Revolution,” Backshall explains.

“Not long after, Russian Revolution started winning plenty of races (including the Group One The Galaxy) and then along comes Monsieur Gustave with four straight stakes wins.

“Don’t tell me you can survive in this game without a sense of humour!

“Fortunately I kept the full sister to Russian Revolution in Turbo Miss (a Flemington Group winner of five races) and also raced Noela’s Choice, who won five for us and is from a half sister to Redoute’s Choice.

“Turbo Miss is in foal to Not a Single Doubt, but sadly, Noela’s Choice had to be destroyed earlier this year.

“We did have some luck at the Magic Millions National Broodmare Sale in June however, buying a half sister to Noela’s Choice in Hot Summer Night.

“She (Hot Summer Night) produced a nice Written Tycoon colt at the start of November and we’ll give her a year off and send her to Russian Revolution next spring.”