Doncaster Success Is A Net Gain 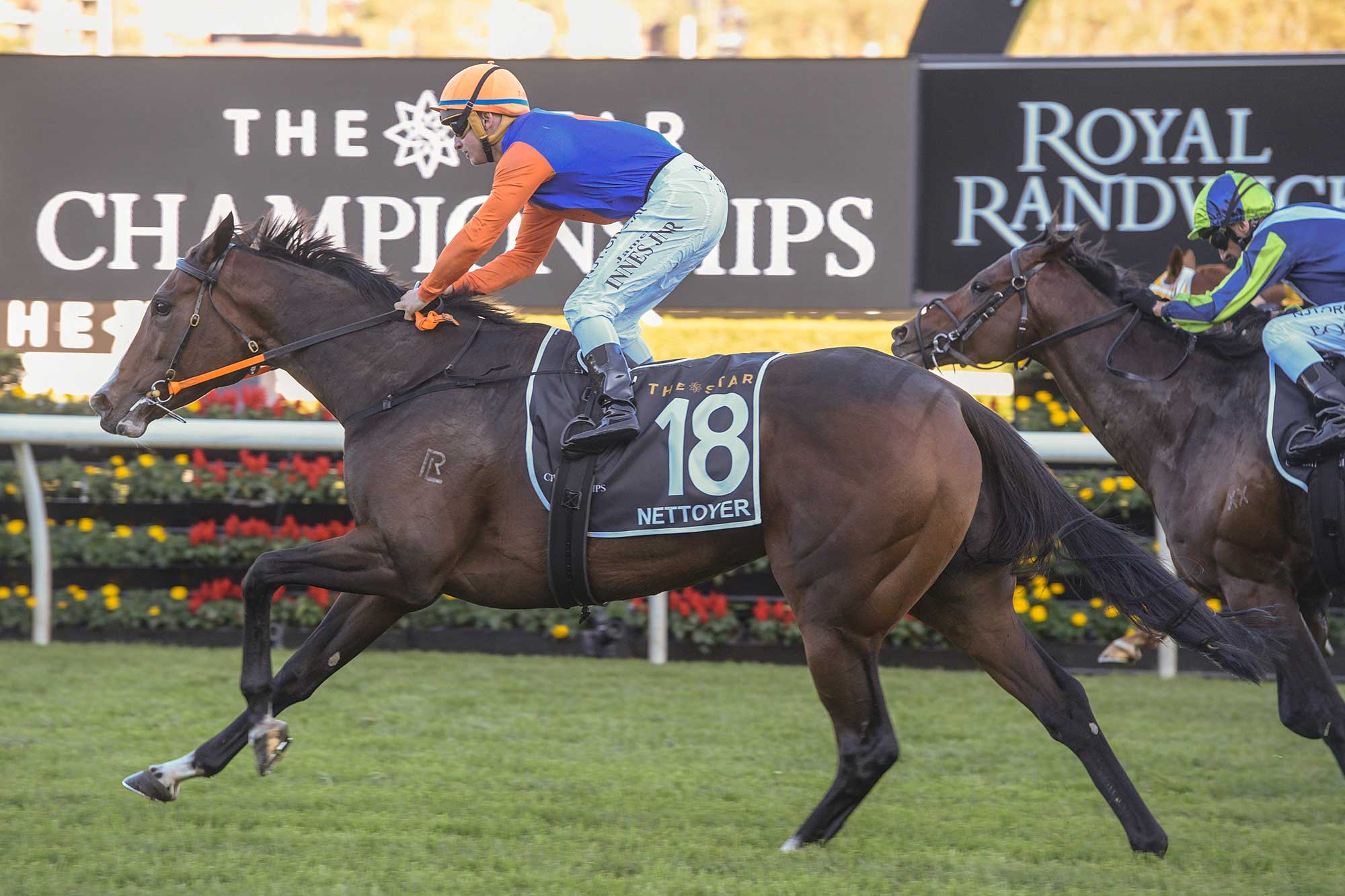 The first day of The Championships has again proven to be a ‘running’ advertisement for this week’s Inglis Easter Yearling Sale with winners of the Group One Derby (Quick Thinker) and Group Three Widden Kindergarten (Doubtland) both sold at Easter, while Group One Inglis Sires’ star, King’s Legacy, has a full sister being offered on Wednesday.

Still, in terms of ‘value’ it’s almost impossible to walk past Saturday’s Group One $1.5 million The Star Doncaster Mile winner, Nettoyer, who was sold for just $20,000 at the 2015 Easter sale.

And what a finish! In what would be a star studded lineup featuring nine ‘internationals’ – among them the last start stakes winner Shared Ambition – plus multiple Kiwis such as race favourite, Melody Belle, the Warwick Farm trained, Nettoyer, wasn’t feeling too much love at $41.

Indeed, as they turned for home in the Doncaster Nettoyer was lagging in last place: the only view being blue sky, empty stands and a whole lot of bums.

But this was definitely Nettoyer’s day and the 6YO Sebring mare absolutely swooped over the final furlong to snare the first Group One success for her trainer, Wendy Roche, and jockey, James Innes Jnr.

Nettoyer’s record now sits at six wins and seven placings, including victories in the Group Three Aspiration Stakes (in successive years) and Group Three Angst. Meanwhile, the pot totals $1,614,700, but is poised to grow even greater come Saturday when the mare goes around again in the Group One $500,000 Coolmore Legacy over 1600m at Royal Randwick.

Despite serious lack of sleep, Roche was still up on cloud nine on Sunday, appreciating the additional hour afforded by the ending of daylight savings, giving her all of three hours slumber.

Based at Mittagong in NSW’s southern highlands with partner and vet, John Crowley plus 6YO twins, Roche gets up every morning at 2.30am to drive to Warwick Farm where she has 10 in work, usually returning home around 6.30pm. She rides each of her stable in trackwork.

Busy days … none of which are made much easier courtesy of Nettoyer.

As evidenced by Nettoyer’s antics getting to the barriers on Saturday, she can be a problem child according to the trainer.

“She keeps you on your toes and I usually have to walk her when all the other horses have left the track of an afternoon,” Roche reveals. “All week I couldn’t ride her and just had to freshen her with 200m sprints. She bit the strapper in the head and he had to get stitches.”

Nettoyer’s quirks were on full display on Saturday as well: “The clerks of the course did a terrific job getting her to the barrier and I think one of the barrier attendants must have backed her because he jumped out of his car and chased her all the way to the gates.”

And while Roche is used to long days, Saturday was one out of the box.

“I didn’t get to leave Randwick until 8pm because she refused to urinate for the swab test and then we had to stop off for a pizza and the bottle shop.

“She (Nettoyer) likes supreme pizza with capsicum sauce and also had some bubbly too as a special treat.

(She might have been purchased on a beer budget but clearly has champagne tastes! And one wonders what the swab would have shown if taken after the trip to the bottle-o).

“By the time I got home it was after 9.30, but I couldn’t sleep with all the excitement and I was still getting text messages from overseas at 2am. I was back up again at 4.30 to go and tend to Nettoyer and the other horses.”

Bred by Greg and Jodie White’s Robrick Lodge and prepared for sale by Riversdale Stud, Nettoyer is a daughter of Sebring (58 stakes winners) from a multiple city winning 2YO in Cleanup, in turn a half sister to 3-time stakes winner She’s Clean and closely related to Champion Japanese Sprinter/Miler, Kinshasa No Kiseki.

Despite the black type pedigree, Nettoyer was only small as a yearling – “very leggy, but tiny with knocked knees” – hence the low asking price of $20,000 when knocked down to Roche’s partner Crowley. Wisely, the Whites decided to retain a share.

“She showed me plenty of ability though when I was breaking her in and we decided to put her through the Inglis Ready To Run Sale with a reserve of $80,000. Someone offered us $60,000 but I knew she had a decent engine and we weren’t going to give her away, so decided to race her ourselves,” Roche recalls.

Good decision! Despite a sixth of eight at Warwick Farm on debut as a winter 3YO and a third at Randwick next time out, everyone sat up and took notice at start number three over 2000m at Randwick in June 2017. Despite the heavy going, Nettoyer donkey licked the competition to win by 10 lengths.

“She actually broke her pelvis with that run and was sidelined for over six months,” Roche reveals. “We decided to throw her in at the deep end when she resumed and started to race her against top company.

“A few people suggested she was eligible for ‘easier’ races, but I knew she had ability.”
Although Nettoyer mixed her form last spring, this time around she won the Aspiration for a second time when resuming in March, finished fourth in the Group One Ranvet two weeks ago and now, of course, the Doncaster.

“I was just so confident about her winning on Saturday and she was cruising throughout. She can be a drama queen, but she’s worth it!”

Due to the coronavirus restrictions, breeder White had to watch from afar, but it didn’t lessen the impact any.

“It’s funny … I was watching the race from home and because there wasn’t a crowd you could hear Wendy cheering and James yelling out as he went past the post,” an elated White points out. “Then again, it’s a bloody wonder they didn’t hear me screaming from my sofa.”

White’s parents – Geoff and Beryl – were synonymous with Group success (particularly in Sydney) for many years, but Saturday’s victory has special resonance.

“The last Group One winner we bred was Eremein (5 Group Ones) – nearly 15 years ago – but to breed AND race a winner of one of the best races on the turf calendar … well, that’s a huge thrill.”

Although the Whites have retained Nettoyer’s Shamus Award 3YO half sister – the lightly raced Mopitts – Cleanup will be offered at next month’s Inglis Chairman’s Sale, in foal to The Autumn Sun.

Much more pressing though are the five youngsters Riversdale Stud will offer at this week’s Inglis Easter Yearling Sale, including two for the Whites – both of them by Sebring.

“We got a huge buzz just seeing Nettoyer go around in the Doncaster, but to actually win it … wow,” Riversdale Stud’s Nick Hodges enthused. “We don’t sell a high volume of yearlings so it means so much to a farm our size.

“We’re grateful to be able to sell on behalf of Greg and Jodie and fingers crossed there is another Nettoyer among this Easter crew.”