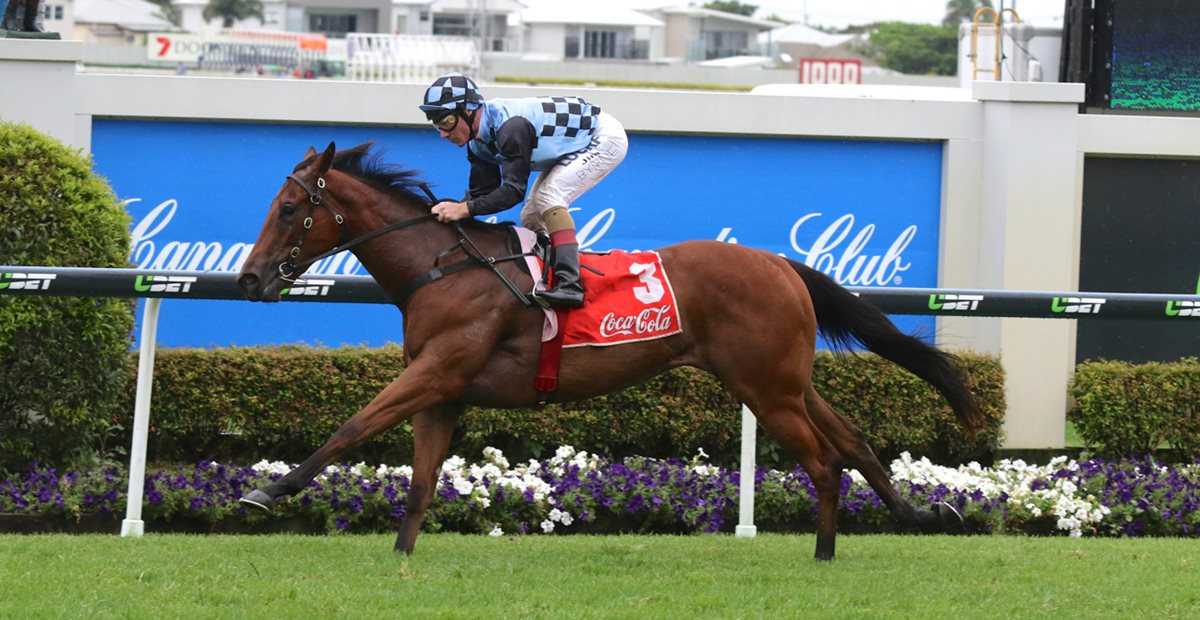 As we near the 2016 Magic Millions race day on the Gold Coast, a two-year-old stakes double for graduates at Doomben on Saturday highlights two of the best chances for Queensland-trained juveniles leading into the lucrative day.

Both Sundance (I Am Invincible) and Zealdy’s Night Out (Myboycharlie) were purchased by Julian Blaxland’s Blue Sky Bloodstock in partnership at this year’s Magic Millions Yearling Sale.

Sundance was the second winner of the Listed Phelan Ready Stakes by Yarraman Park’s Champion first season sire I Am Invincible after the 2013 win of Bassillique.

Both Sundance and Bassillique are Toby Edmonds, who interestingly also trained their sire in his early days on the track,

Sundance was a $140,000 purchase from Newhaven Park draft at the 2015 Magic Millions Yearling Sale by Blaxland and Edmonds.

Sundance (pictured as a yearling) is out of Pacific Dreams (Desert Prince), an unraced half-sister to Cannarelle, who is in turn the dam of I Am Invincible.

Pacific Dreams was sold at the 2014 Inglis Broodmare Sale for only $20,000 carrying a foal to I Am Invincible, with the resultant colt sold earlier this year to Luskin Park Stud for $32,000 as a weanling that will now head to the Easter yearling sale.

Pacific Dreams wasn’t covered this season, but produced a colt by Rosemont Stud’s Starspangledbanner on October 22.

Trainer Toby Edmonds won’t  decide if his colt will have another start or not just yet, but will wait for the dust to settle after the impressive win.

“It (the McLachlan Stakes) is the logical race for him next but he doesn’t need to run again,” stated Edmonds.

“He might have a trial or a jump-out but he is in the Millions field now so I won’t do too much.”

The most expensive yearling sold by Vinery Stud’s Myboycharlie at this year’s sale, the Yarraman Park consigned Zelady’s Night Out was secured by Blue Sky Bloodstock and Ricky Surace’s B2B Bloodstock for $65,000.

A half-sister to the Group 3 winner Excites Zelady, Zelady’s Night Out (below as yearling) is the eighth foal of the Zeditave mare Zelady.

Unfortunately Zealdy’s Night Out is the final foal of Zelady, with the mare having died earlier in the year.

In-form trainer Tony Gollan was very excited by the performance of his filly.

“She’s a very professional filly, she really made light work of it in the end,” Gollan said.

“We will go home and have a chat to the owners and see what we’ll do. We may go four weeks into the Millions, we’ll see how she pulls up.”

If both trainers decide that their two-year-olds need another run, then they could clash in the Group 3 McLachlan Stakes (1200m) on Boxing Day.

Arthur Mitchell of Yarraman Park was excited by the victory of the two juveniles on Saturday, having sold one at the sale (Zelady’s Night Out) and standing the sire of the other.

“Sundance’s win was pretty impressive, especially for being on wet track,” commented Mitchell.

By the stud’s leading sire I Am Invincible, Mitchell was quick to point out what a quality book of mares he has just finished covering.

“On top of that there is also the dams of Group 1 winners Fat Al, Alinghi and Sepoy, as well as Belle Couture, the Redoute’s Choice half-sister to Black Caviar.”

“All up his book contains some 80 stakes winners or the dams of stakes winners, so we’re really pleased with that, especially as his crop of foals on the ground were also from an outstanding book of mares.”