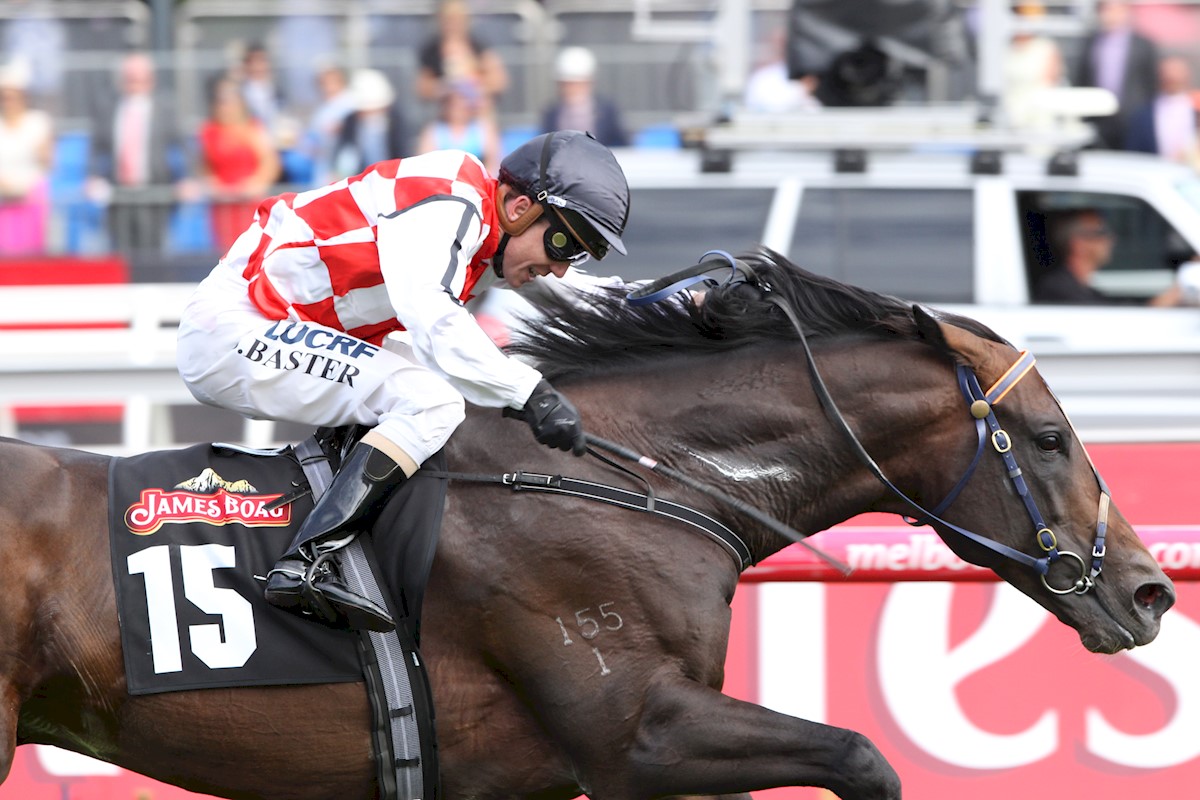 Winning a Group One race is not an easy task. Far from it.

So, to ‘win’ one, only to lose it minutes later in the stewards’ room, would be – to say the least – devastating.

Back in March, Awesome Rock was first across the line in the time honoured Australian Cup, but as owners, trainers and syndicator burst into spontaneous celebrations, they soon came back to earth with a thud when their horse was relegated to second on protest.

This is no small thing. Quite aside from the prestige and prizemoney, there was also the now 5YO’s stud future to consider.

The difference between Group One and Group Two can often be counted in the millions when it comes to a stallion’s resume and, as a well bred son of Champion Sire, Fastnet Rock, Awesome Rock was between a rock and a very bright future.

Such concerns evaporated on Saturday though when the Team Corstens trained, Awesome Rock, lived right up to the first part of his name with success in the $2 million Emirates (formerly LKS Mackinnon) Stakes.

This time there was no question of interference as Awesome Rock surged clear with 200 metres to go under the vigorous riding of Stephen Baster and proved unassailable for those chasing.

For the popular Baster it was his first Group One win in “six or seven years” and his ever present smile will now have to be surgically removed, while for father and son training combo – Leon and Troy Corstens – it was all highly emotional.

Troy was quick to pay tribute to Leon, who had been right hand man to Bart Cummings in Melbourne for many years before taking out a trainers’ licence in his own right.

It was also emotionally charged for syndicator, Brad Spicer, who has been closely associated with the Corstens for a long time and selected Awesome Rock as a yearling at the 2013 Gold Coast Magic Millions: paying $575,000 for the privilege.

“After the obvious disappointment of the Australian Cup, it’s hard to describe just how good that win was in the Emirates,” Spicer enthused. “I’ve been close friends with the Corstens for a long time, but it was also great for the owners who had to grin and bear the Australian Cup result. The fact that Awesome Rock bounced back with a Group Two victory in the Dato Tan helped and he was far from disgraced in the Cox Plate behind Winx (finishing fifth), but there’s nothing quite like a Group One.

“He’s a fantastic advertisement for racehorse ownership too: Stan Saric, who got me to buy Awesome Rock as a yearling, raced Starspangledbanner as his first horse and now he’s got another Group One winner.

“What’s more, the Emirates has gone a long way to repaying the faith of Newgate Farm who purchased a 20% interest just before he was due to run in the Caulfield Guineas. Newgate Farm actually sold the horse to me as a yearling on the Gold Coast and then shortly after they bought into Awesome Rock, the horse hurt himself and was off the scene for eight months.

“Well, they’ve got their Group One now and hopefully more to come. Awesome Rock will be tipped out and brought back for the autumn where, yes, he’ll be targeted for the Australian Cup!

“It’s great that he’s now ensured his place as a commercial stallion prospect, but we’re in no hurry to retire him. Aside from the Australian Cup, there’s also options like next year’s Kingston Town in Perth or, for that matter, don’t be surprised to see him in a race like the Cantala Stakes, as we reckon he’ll also be suited over the mile at Flemington. He’s certainly got the speed.”

For the record, Awesome Rock is a three quarter brother to the Sydney stakes horse, Earth, and is from the 3-time stakes winning Giant’s Causeway mare, Awesome Planet.

This is also the family of Epsom Derby winner, Dr Devious, Royal Court, Archway and Shinko King – all sires – plus Champion Fillies Dancing Rain and Maybe.

Fastnet Rock, whose sire sons include Foxwedge, Hinchinbrook, Rothesay, Smart Missile and Your Song, has produced 104 stakes winners, of which 25 are Group One winners … um, better make that 26.

Coolmore Australia’s Bloodstock Sales Manager, Shane McGrath, also looked on with considerable interest as Awesome Rock took out the Emirates: “That (Group One success) was long overdue and it’s a fantastic result for his connections, who have been very patient, and it’s also terrific for Alan and Sue Olive who bred him.

“Awesome Rock was always a lovely foal at the farm and obviously sold very well as a yearling at the Magic Millions.

“It has been a great Melbourne Spring Carnival for graduates of Coolmore Australia with Awesome Rock joining the likes of Winx, Comin’ Through, Anaheim and Rageese among others.”