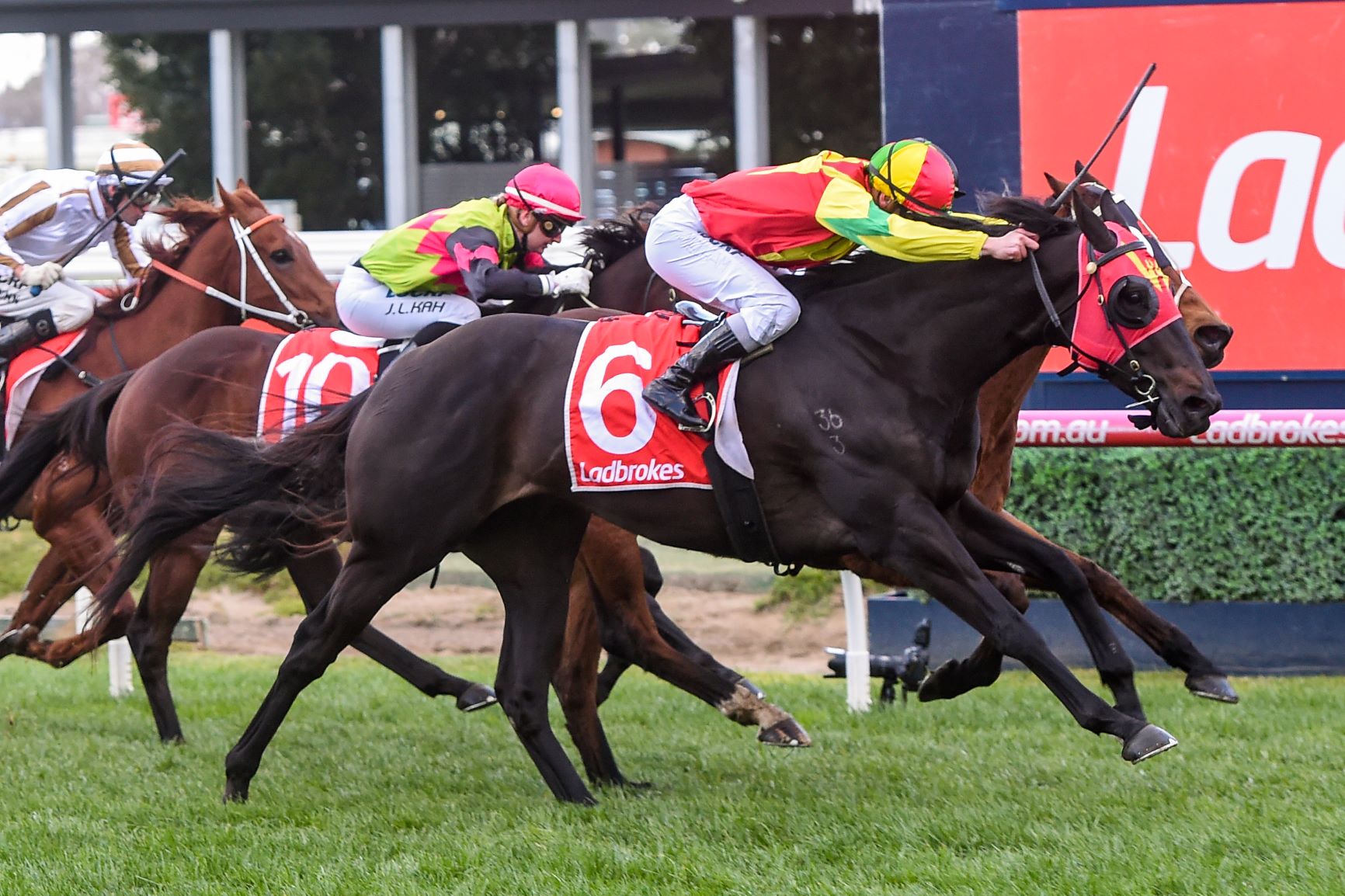 Turns out we got it wrong … again.

Missing from the scene since October and out of the winners’ enclosure since August 2017, Oak Door was only considered a $31 chance in the Group Three Ladbrokes Sir John Monash Stakes over 1100m at Caulfield on Saturday. Even better odds if you’d shopped around.

However, it was the Oak Door of old as the John Sadler trained 5YO zoomed to the lead over the closing stages of the Monash to shut out race favourite, Jungle Edge, in a thriller.

Although Oak Door failed to win in three starts as a 2YO, the flashy black gelding won his first start at three and – between December ’16 and February ‘17 – produced six top four finishes from as many outings, culminating in a go to whoa victory in the Group Two Autumn Stakes over 1400m at Caulfield.

They were definitely the halcyon days given that Oak Door tended to mix his form from then on, albeit posting a win at Moonee Valley and a second in the Listed Xmas Stakes at Caulfield.

Then, after finishing midfield in the Listed Caulfield Village last October, it was discovered Oak Door had a bone chip, resulting in his lengthy absence.

Hence, the long odds in the Monash. However, the win didn’t come as a huge shock to popular trainer, John Sadler, who said on radio on Saturday morning that Oak Door was a strong chance, while jockey Ben Melhem was likewise confident.

Unfortunately for Sadler, illness prevented him being trackside for the win, while managing part-owner, June Wilson, watched the race on TV from Queensland.

“I picked a good time to go away on holidays, but it was fantastic to see him win again,” Wilson enthused.

(Anyone enduring the cold at Caulfield on Saturday would not be suggesting that Mrs Wilson pulled the wrong rein by staying in Queensland!).

“I’ll be leaving it up to John as to where the horse runs next, but it’s wonderful that the horse doesn’t seem to be suffering from the after effects of the bone chip.”
With Oak Door being owned by numerous members of her family, along with close friends, Wilson has raced horses since the 1980s, including Cobbobonee, who finished second to Bounty Hawk in the 1983 Victoria Derby. Wilson currently has six in work with Sadler at Caulfield.

“We were very good friends with Phil Sly, who passed away recently, and he purchased Oak Door as a yearling and we all went into the horse together,” Wilson reveals. “We also raced Ms Funovits with Phil.

“It just goes to show you the ups and downs in horse racing … Ms Funovits won at Flemington at her first start, the (Group Two) Karrakatta Plate at her next start and dropped dead on her way to the barrier for what would have been her third run (Group Three WA Sires’ Produce Stakes).

“You take the good luck when it comes your way!”

Oak Door’s victory was also a tremendous result for Basil Nolan, chairman of Thoroughbred Breeders Australia and principal of Raheen Stud, one of Queensland’s most famous farms.

Nolan owns Oak Door’s dam – the stakes winning Orientate mare, Beyonce’s Star – and is poised to sell a Sebring half brother to Oak Door at the Gold Coast Magic Millions 2YOs in Training Sale in October, while that colt’s full brother will be offered at the Gold Coast Yearling Sale in January.

Beyonce’s Star is currently in foal to boom second season sire, Zoustar whose progeny include 3-time Group One winner, Sunlight, Lean Mean Machine and Zousain and stands this season at Widden Stud at a fee of $154,000.

“It’s a pretty good family with her granddam, Solo Performance, a Group winner at two and runnerup in the (Group One) Blue Diamond,” Nolan explains. “Solo Performance is also the dam of Group Two winner Solo Show, in turn the dam of another Group Two winner in Toast of the Coast, while another close relation is this year’s stakes winner Wild Planet.

“Anyway, we were at the 2010 Magic Millions National Broodmare Sale and a few had gone through that we were interested in, but then along comes Beyonce’s Star. Orientate hadn’t exactly set the world on fire after his two seasons in Australia, but an American vet at the sale told me “the Orientates have gone really well back home”, so I bought Beyonce’s Star for $40,000.”

Beyonce’s Star had won four races prior to the sale, including one at the Sunshine Coast just the day before she went through the ring.

Keeping her in work and placed with Bryan Guy, Beyonce’s Star ran her first stakes placing just three weeks later and, from there, would register top four finishes in six of her next eight starts.

Beyonce’s Star’s swan song came in the Listed Just Now Stakes at Eagle Farm that December (coincidentally, while in foal to Show A Heart).

“Talk about luck, it was such a bad day that they called off the races immediately after the Just Now, so she only just snuck in her stakes win,” Nolan recalls with a laugh. “That’s why I didn’t think Oak Door would have any problem in the wet on Saturday!”

Sent to Darley’s Champion Sire, Commands, in her third season, Beyonce’s Star produced Oak Door, who would be knocked down for $340,000 at the 2015 Gold Coast Magic Millions Yearling Sale.

“It was a real thrill to watch Oak Door win on Saturday,” Nolan adds. “A good friend phoned on Saturday night and, knowing that the mare is in foal to Zoustar, he asked if I was taking good care of Beyonce’s Star. I told him she wasn’t staying in my bedroom, yet, but she’s right next door!”