Oh, The Sun Shines On Another Australian-Bred Star 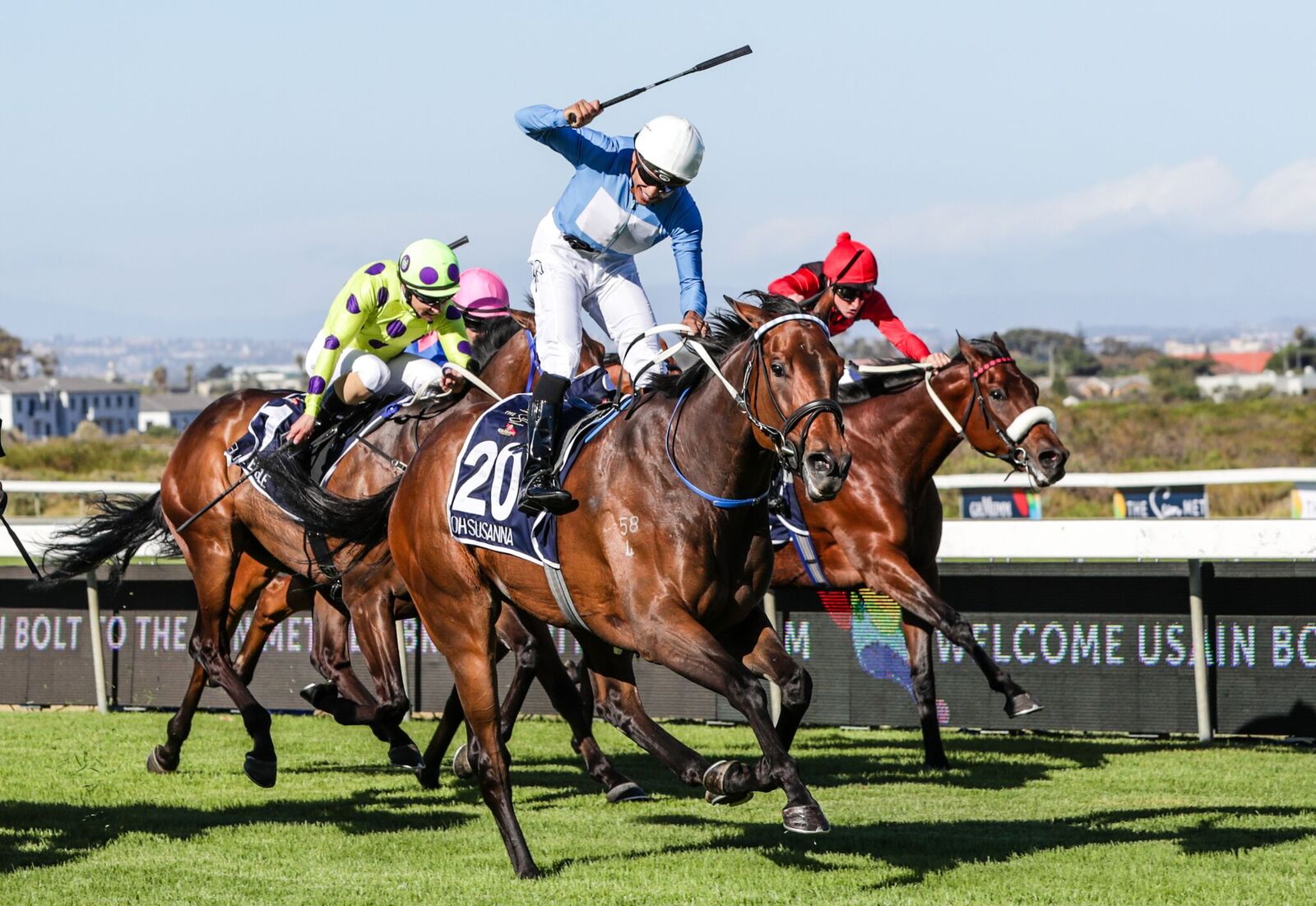 The Group One Sun Met over 2000m at Kenilworth is the jewel in South Africa’s crown. The feature event on the richest race day.

Last year, the Sun Met was captured by Whisky Baron, the second Australian-bred galloper in the race’s 134 years to scoop the prize, but history – it seems – was going to be against Oh Susanna adding to the tally in 2018.

After all, no 3YO filly since 1905 had come away with the title, but Oh Susanna is no ordinary 3YO filly.

Coming into the Sun Met, the Justin Snaith trained youngster wasn’t without support, particularly on the back of an impressive Group One victory in the Kenilworth Paddock Stakes over 1800m on 6 January.

However, multiple Group One winner, Legal Eagle, was sent out favourite and hit the front, appearing the winner with 200m to go, only to yield to a fast looming Oh Susanna over the final stages. A finish worthy of the great race.

Oh Susanna has now compiled a more than tidy CV of three wins and three placings (including a second in the Group One Kenilworth Cape Fillies Guineas) from eight outings.

The victory was particularly special for Drakenstein Stud’s Gaynor Rupert, who bred the filly at Coolmore Stud in NSW before bringing her across to South Africa as a weanling.

Drakenstein Stud has produced several topline performers since hanging out its shingle in the mid 2000s, but as Racing Manager, Kevin Sommerville points out, Oh Susanna is the cherry on top.

“Gaynor Rupert is passionate about her breeding and racing and is very hands on, particularly when it comes to the purchase of bloodstock and the planning of matings,” Sommerville explains. “Oh Susanna’s dam, Sharp Susan was a Group Two winner and hails from an outstanding North American black type family and was purchased for $1,050,000, through Grant Pritchard-Gordon, at the 2012 Inglis Easter Broodmare Sale.

(Sharp Susan had earlier been sold as a broodmare prospect in 2008 for US$2 million).

“It was Gaynor’s first foray into the Australian market and while, unfortunately, Sharp Susan’s first two foals in Australia – by Street Cry – both died, she then had a Bernadini filly (Biblical Susan) which we brought to South Africa.

“Then Darley was kind enough to offer us a free return to Street Cry and that’s when the mare came up with Oh Susanna.

“It’s Drakenstein policy to sell the colts and retain the fillies and that’s certainly played in our favour with Oh Susanna.”

Sharp Susan then produced an Exceed And Excel colt – an unraced 2YO called Signore Fox – that was purchased by Snowden Racing for $300,000 at the 2017 Inglis Australian Easter Yearling Sale, while her Fastnet Rock yearling filly suffered an injury and is in rehabilitation at Coolmore Stud.

Sharp Susan was ultimately exported to Ireland in November 2016.

Buoyed by Oh Susanna’s success in the Sun Met, Sommerville says Drakenstein’s involvement in the Australian industry, despite the early hiccups, has clearly paid dividends.

A graduate of the Godolphin Flying Start program, Sommerville worked with leading bloodstock agent, Robin Bruss, for a number of years in South Africa, and was Nominations Manager at Juddmonte Farms in England for five years before eventually taking up his role at Drakenstein in 2012.

“Gaynor has a real vision for the industry and has steadily built up her broodmare band from just a couple of mares when Drakenstein started, to around 95 which are currently on the books,” Sommerville enthused.

“Breeding horses in Australia and then bringing them across to South Africa can be an expensive exercise, but when you have results like the Sun Met on Saturday, it’s all worthwhile.”

Coolmore Australia’s Sales, Marketing and Racing Manager, Sebastian Hutch was also quick off the mark in congratulating Drakenstein Stud on its success.

“When Mrs Rupert bought Sharp Susan at the Inglis Broodmare Sale in 2012, we were delighted when the mare was entrusted to our care,” Hutch adds. “Unfortunately, the mare’s early years at Coolmore didn’t go quite to plan for one reason or another, but the first of the foals repatriated to South Africa, Biblical Susan, was a winner and then Oh Susanna came along.

“She (Oh Susanna) was a very good foal, plenty of strength and a lot of quality, so we were quite optimistic that she would do well for Mrs Rupert.

“Kevin (Sommerville) told us at Easter last year that the filly was making a good impression, but at that stage she had only had one run and that was when she met with defeat in her maiden. Needless to say her progress has been startling and to win such a prestigious race as a 3YO filly, at just her eighth start, is nothing short of staggering. On the evidence of her win, it won’t be her last Group One victory either.

“It turned out to be another great weekend for graduates of the farm with the winner of the Karaka Million, Avantage, having also been raised at Jerrys Plains for our friend Willie Calder, while Blue Diamond favourite, Long Leaf, is another star for the ‘raised and grazed’ list.”