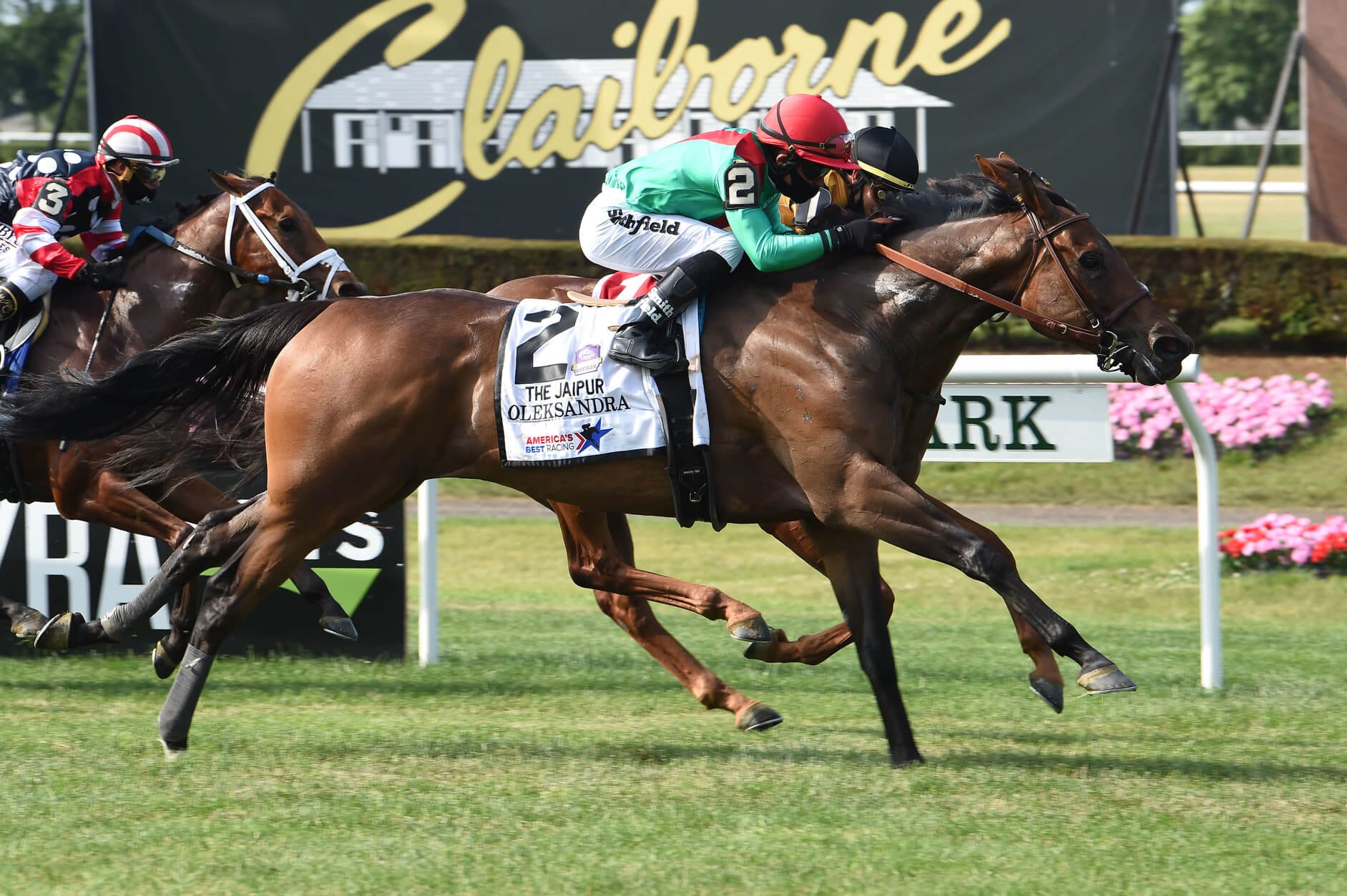 It was a thriller alright! Racing in the Jaipur Stakes over 1200m at Belmont Park on Sunday morning (our time), Australian-bred mare, Oleksandra, was having her first tilt at Group One level in the United States and, after turning for home in last place, it appeared she’d given rivals too much of a head start.

However, the Animal Kingdom 5YO really put the pedal to the metal over the closing stages to pull off a last gasp victory.

It’s certainly a long hike from a three length second at Hawkesbury on debut back in October 2017, to success – nearly three years later – at the elite level on the famous Belmont Stakes program.

Oleksandra was bred, and is raced by, the hugely successful Team Valor International which notched up its 30th individual Group One winner and 40th Group One victory courtesy of the Australian mare.

Oleksandra is by 2011 Kentucky Derby and 2013 Dubai World Cup winner, Animal Kingdom, who was also bred and raced by Team Valor and stood for four seasons in Australia from 2013-2017.

Trained in Australia by Bjorn Baker, Oleksandra would race just the three times for three placings – at Hawkesbury, Randwick (finishing third behind subsequent stakes winners Epidemic and Seaway) and Newcastle – before being sent to North America in early 2018.

Since arriving in the States, Oleksandra has had just the 12 starts for seven wins including a Listed race at Saratoga and Group win at Keeneland. Thrice placed at Group level, Oleksandra came into the Jaipur on the back of a half length second in the Group Two Monrovia Stakes at Santa Anita.

Thrilled with staking his 30th Group One success story – albeit acknowledging she didn’t need to make it “that close” – Irwin always considered Oleksandra a top class performer.

“There was a Grade (Group) One race at Santa Anita over six and half furlongs (1300m) that has been disbanded and she would have been simply unbeatable over that trip,” Irwin points out. “However, everything just went right for her at Belmont and we’re thrilled with the win.”

Oleksandra is out of the Team Valor raced Alexandra Rose, a 3-time stakes winner in South Africa and dual Group One placed. A half sister to three stakes winners, Alexandra Rose has produced three winners of her own, including the Macau stakes horse, Hostwin Galaxy.

“She (Alexandra Rose) is only an averaged sized mare, but produces these absolute giants,” Irwin reveals. “We’ve got the full-brother to Oleksandra, a gelding called Macedonian Ruler, who was placed at his only two starts in Australia. He had his first run in the States at Santa Anita on Friday and he’s a big fellow too.

“Alexandra Rose has a rising 2YO, a full brother to Oleksandra, that has just been broken in in Australia and he’s called Prince Alexander, while the mare is in foal to (Scat Daddy’s Group One Breeders’ Cup Juvenile winner) Mendelssohn who I reckon is a real sleeper.”

“While we still have mares in South America, South Africa and Australia, Team Valor has really scaled back on its broodmares and concentrating mainly on the racehorses,” Irwin explains.

“As a matter of fact, as of 2020 we’re largely concentrating our operation in Europe, although that has been interrupted somewhat by the coronavirus outbreak.”

Despite Group One success in the USA, Canada, France, Dubai, South Africa, Hong Kong and Brazil, Irwin has made just the one trip down under: in 2012.

“We had a horse with Andre Fabre called Brigantin (a multiple Group winner in France) who went to Australia to compete in the Melbourne Cup,” Irwin recalls. “He ran third in the Geelong Cup, but ended up missing a start in the Melbourne Cup, which was unfortunate, because I’d come to Australia to watch him run instead of staying back to see Animal Kingdom in the Breeder’s Cup Mile (who finished second).

“Still, I got to spend Derby Day at Flemington and had a wonderful time and met some terrific people.”

Although Irwin isn’t ruling out another trip south, it’s definitely not on the short term planning.

“I was actually supposed to be in England at the moment attending Royal Ascot, along with 24 of our partners, but COVID-19 has put a stop to all of that,” Irwin adds. “I’m 77 years old and don’t travel anywhere near as much as I used to, but I’ve got an excellent assistant, Jessica Berry, who is only 26 and would fly forwards and backwards to Europe three times a week if you asked her to.

“Jessica has actually spent a bit of time in Australia. She’s a graduate of Godolphin’s Flying Start program and worked on a stud farm in Australia and also with Gai Waterhouse’s racing stable.”

As for Oleksandra, she is now set to target the Group One Breeders’ Cup Sprint in November.

We’d guess Barry Irwin will be staying in the States to watch that!

Australian-breds also made a clean sweep of Hong Kong’s Group Three Premier Cup on Sunday with evergreen, Jolly Banner, too sharp over the 1400m at Sha Tin.

Bred in Victoria by Makybe Racing and from a Group winning half sister to 3-time Melbourne Cup winner, Makybe Diva, Jolly Banner is an 8YO by Lonhro who has won at least one race in each of the seasons he has raced.

With eight wins and 15 placings from 41 starts, it was the second Group victory for Jolly Banner who has now won over HK$14.2 million (A$2.7 million) in stakes.

Certainly a great return on the $300,000 paid by leading Hong Kong trainer, Ricky Yiu, when offered through the Tyreel Stud draft at the 2013 Inglis Easter Yearling Sale.