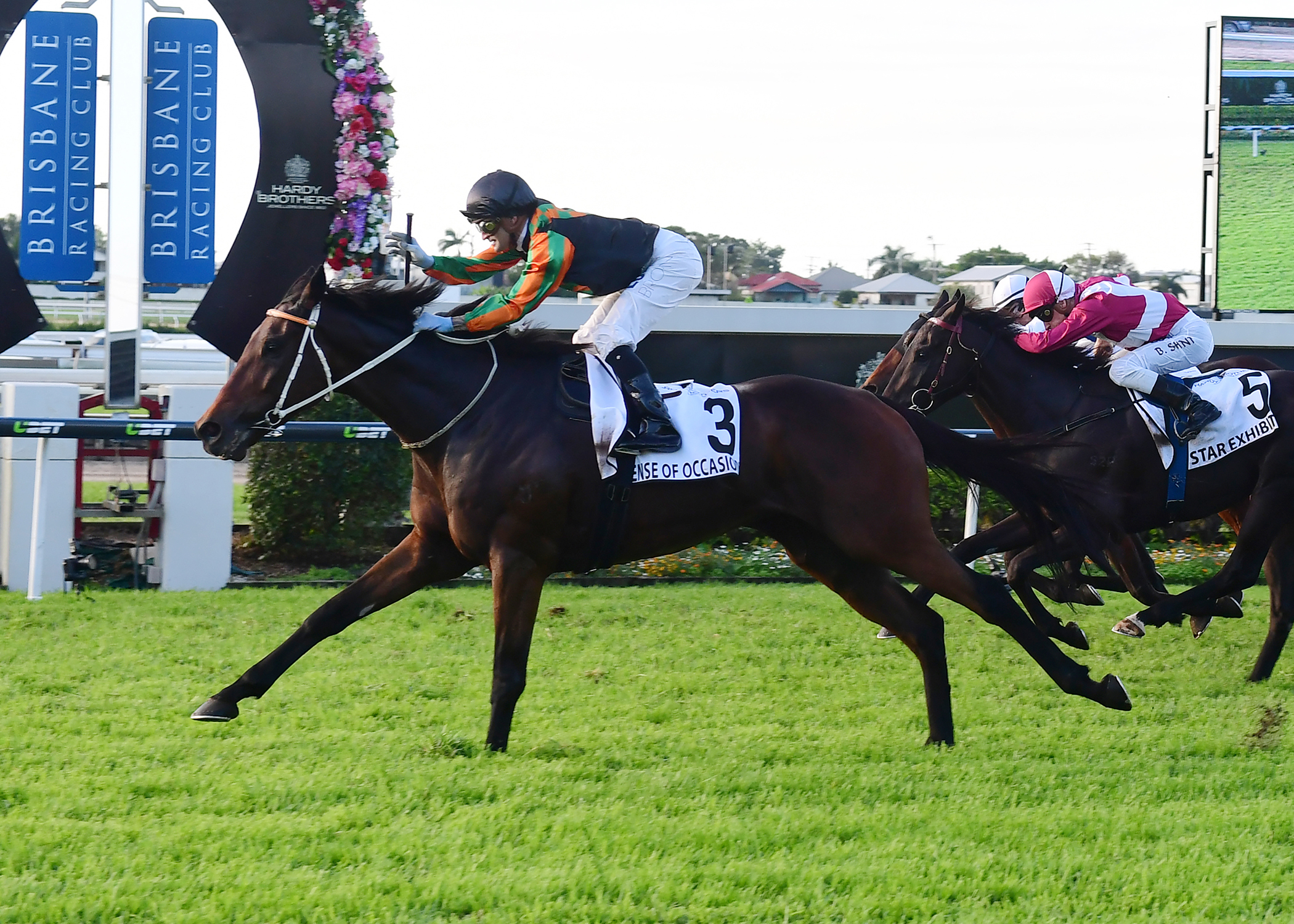 To suggest that owner, Anthony Hall, was happy with the victory of Sense of Occasion in Saturday’s Group One Hardy Brothers Doomben Cup (2000m) would be something of an understatement.

“It’s only taken me 37 years to become an overnight success,” an elated Hall points out. “I had a pretty good horse called Moss Rocket (a 7-time Group winner) back in the 1990s and while he was Group One placed, he never won a Group One.

“We were absolutely thrilled to win the Doomben Cup. (Trainer) Kris Lees was a bit concerned about the wide barrier (15 of 15) and whether there would be enough pace, but they piled it on and he even got a bit of a check, which only added to the win overall.”

A 6YO gelding by former Darley based stallion, Street Sense, Sense of Occasion has won eight (four at stakes level) of 34 outings with nine placings and $1,691,020 in stakes.

Although he first raced as a spring 3YO, Sense of Occasion is enjoying a remarkable season with three black type victories, along with placings in both the Group One Doncaster and Group One Queen Elizabeth in April.

Indeed, he’s come a long way since his victory in the Group Two Villiers at Randwick last December, when sent out a $31 pick after two months off the stage.

Hall hadn’t even ventured to Sydney from his Newcastle base to watch the Villiers as he thought the horse would need the run, but the owner was definitely front and centre on Saturday for the Doomben Cup.

“He (Sense of Occasion) has been in terrific form and his only real disappointment of late was in the (Group Two) Hollindale where he finished sixth. He was a bit unlucky that day though and Corey (Brown) has gone on record saying it wasn’t his best ride, but that was a brilliant effort by Corey in the Doomben Cup,” Hall adds.

“Sense of Occasion will be tipped out now until the spring and is likely to return for a race like the Epsom before heading down to Melbourne. It’s a very good position to be in.”

“I was a little concerned with the alley but I suppose the track, when it started to break up, negated that a little. Corey timed his run to perfection,” Lees claims. “I suppose I have to admit that Sense of Occasion is best on wet tracks, but he really is just such an honest horse and really does give his all.”

Already banking over $1.1 million since the start of 2017, Sense of Occasion has proven to be a tremendous bargain for Hall who paid just $80,000 for the then colt at the 2012 Inglis Australian Easter Yearling Sale.

“(Bloodstock Agent) Paul Beamish has bought a few horses for us and I was with him at the sale and saw this really nice Street Sense yearling go through the ring which was eventually purchased for $210,000,” Hall reveals. “Paul told me he’d seen a pretty good type by Street Sense in the Yarraman Park draft and we should have a look.

Hall, a retired businessman, then got a few mates into the horse, along with close friend, John Wragge, who sadly passed away in 2016.

Sense of Occasion is out of the well-rated mare, Saywaan, and was bred at Yarraman Park by Shadwell Stud, which had another highly successful day as owner of Listed Hilton Nicholas Straight Six winner, Tashbeeh.

Saywaan was a half sister to the Group One Sir Rupert Clarke Stakes winner, Rewaaya, and traces back to the highly influential Easy Date (dam of Snippets), but unfortunately died in 2015.

Street Sense, meanwhile, is a 3-time Group One winning son of Street Cry and has produced 48 stakes winners world wide (Sense of Occasion is his eighth Group One winner). Street Sense was exported to Japan in 2013 after five seasons at Darley in Australia.

HOOFNOTE: On Saturday in Australia, 16 black type races were conducted in four states – from 1050m to 3200m – with locally bred gallopers making a clean sweep.