Ownership Seminar In A Class Of Its Own 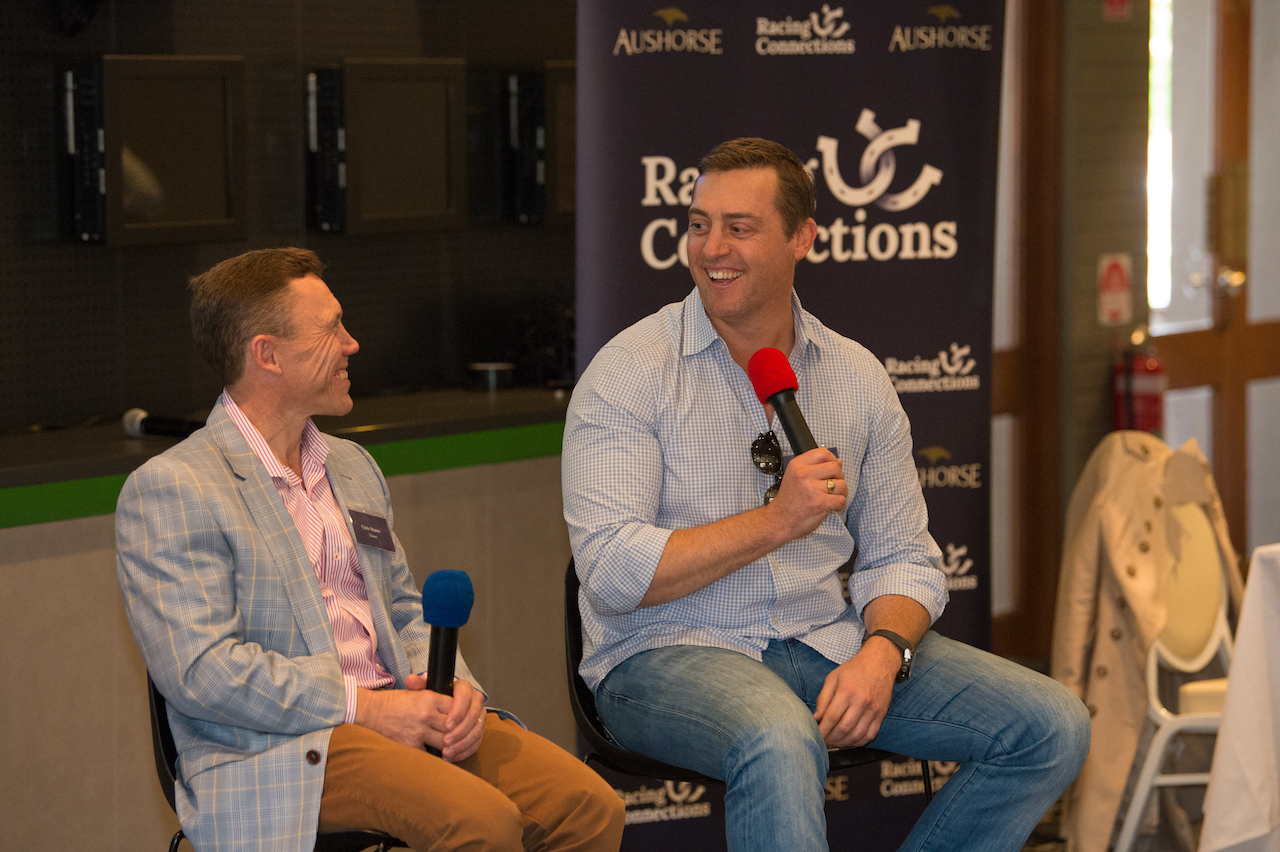 They say there is no such thing in racing as a certainty, but judging by attendance at the Aushorse/Racing Connections Masterclass at Eagle Farm on Sunday morning, it appears to be a given that there are a lot of folk interested in racehorse ownership.

Similarly popular, albeit less talkative ‘model’, was Salmanazar affording enthusiasts the opportunity to see – up close – what buyers look for in a horse.

Eureka Stud’s Scott McAlpine got the ball rolling by discussing what’s involved in running a stud farm, stallion selection and sales preparation, while Blue Sky’s Julian Blaxland outlined exactly what he looks for when attending sales.

Both McAlpine and Blaxland took time out from their day jobs with the former preparing to sell yearlings at the Gold Coast Magic Millions National Sale from Tuesday, while the latter will be hoping to snare a few more bargains. Blaxland has been an active player at the National Sales series in the last 10 days, buying 11 weanlings for $1.6 million and 45 broodmares for $7.5 million.

“Wow, what a great turnout,” Blaxland enthused after the Masterclass. “Standing room only. They were all a pretty attentive mob as well – really interested in the process.

“I’ve found that people are increasingly keen to get involved in racehorse ownership, but are often put off by simply not knowing what to do next. These Masterclasses and the Racing Connections website (racingconnections.com.au) really provide a great insight.

“People at the Masterclass asked some terrific questions and are obviously keen to take that next step, so hopefully Sunday’s event will have gone a long way to facilitating future involvement. We should issue a bit of a disclaimer though … once bitten by the bug of ownership, there doesn’t appear to be any known cure.”

That’s certainly the case with Houtzen’s part-owner, Steve Hargreaves, whose filly won this year’s $2 million Magic Millions 2YO Classic on the Gold Coast.

“I’ve owned horses for around 12 years now and love it … a life changing experience,” Hargreaves points out. “My involvement has increased over that time and just before Houtzen came along, three of my friends and I formed a syndication company called ‘Lucky Clover Thoroughbreds’ which will race its horses with (Houtzen’s trainer) Toby Edmonds.

“And I think the professional backgrounds of the four of us is a clear illustration of what the thoroughbred industry is all about. The diversity of it … one is an accountant, another is a CEO for a major corporation, there’s an electrician and there’s me … a copper.

“Ownership is open to everyone and it really doesn’t matter if you have a winner at the Magic Millions or Murwillumbah – it’s just a feeling you can’t describe.

“I was a bit nervous at the start getting up there and speaking but the feedback was tremendous. People asked a whole range of questions and with any sort of luck a few of those might end up with a Houtzen of their own.”

The training trio on hand also provided some valuable insights and jockey-turned-trainer, Chris Munce, had the rapt attention of the crowd as he pointed out the ‘irony’ of his change in profession.

After 29 years in the saddle where he piloted a record three winners of the Magic Millions, plus victories in the Golden Slipper and Melbourne Cup, Munce took up training a little over two years ago.

“I’ve found out there’s a big difference between being legged up, and legging up. Whereas jockeys are only on the horse for a couple of minutes, months of work by a trainer can be undone in seconds by an ill-judged ride,” Munce laughed. “Still, I wouldn’t change a thing. It’s a wonderful industry.”

Aushorse and Thoroughbred Breeders Australia CEO, Tom Reilly, was understandably pleased with the roll up and active participation of attendees: “This was our most successful Masterclass to date and follows on from previous events in Adelaide and Sydney.

“I’d really like to thank everyone involved: Julian, Scott, Tony, Chris, Toby and Steve for participating in the day and am especially grateful to Tony Gollan for bringing Salmanazar … it’s one thing to point out aspects of horse conformation on a chart, but allowing people to get up close and personal makes a real difference.

“Aushorse’s Racing Connections, and it’s informative website, is a relatively new brand and has arisen from the most extensive research ever conducted into racehorse ownership.

“It’s designed to break down any barriers to industry investment from all and any walk of life and to ensure that people are fully equipped – information wise – to make their decisions.

“There has never been a better time to be involved in the Australian thoroughbred industry: the Magic Millions National Broodmare Sale last week fetched over $106 million, while Australian sales this financial year have yielded over $555 million – up over 10% on the previous year’s figures. Prizemoney is on the up as well with nearly $570 million distributed last season, an 8% increase on 2014-15.

“It is great to see that there is such confidence among people who are willing to invest in our thoroughbred industry.”