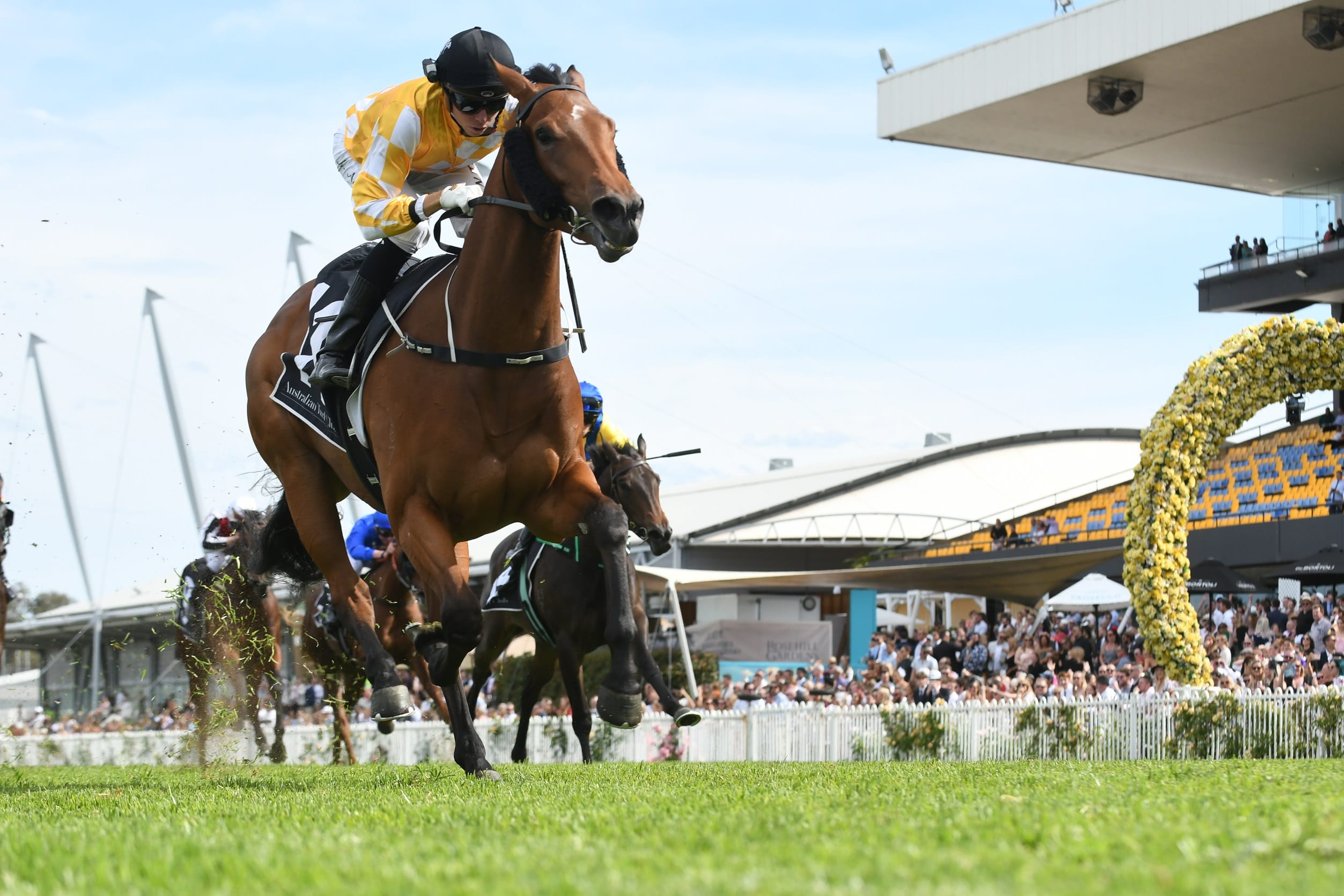 Celebrations had barely ended following Pancho’s Melbourne Cup week win when Sledmere was in the spotlight again thanks to the untapped juvenile filly Dame Giselle.

In a whirlwind 48 hours, the Sledmere-bred Pancho emulated a Melbourne Cup winner while Dame Giselle, foaled and raised on the Scone farm, emerged as an early pick for next year’s Golden Slipper.

Pancho, from the first crop of Newgate Farm sire Dissident, broke through at stakes level in winning a Listed race over 1800m at Flemington on VRC Oaks day.

In becoming his sire’s first stakes winner, Pancho captured the race won last year by the subsequent Melbourne Cup winner Vow And Declare and heightens expectations of an even better autumn campaign.

It will be at the same time of the year that Dame Giselle, an I Am Invincible filly, is tipped to be among the leading chances for the Golden Slipper.

Dame Giselle reaped the benefit of race experience to win the Golden Gift, an 1100m race at Rosehill Gardens that carried the first $1 million purse of the season for juveniles.

“It’s nice when everything goes to plan with all the hard work everyone does,” Sledmere’s Catriona Murphy said.

Sledmere’s results have been delivered from broodmares at contrasting stages of their careers.

Pancho is the first foal from the Written Tycoon mare Novel Dancer, a stakes placegetter who retired from racing in 2015 after winning two of her nine starts.

Novel Dancer was purchased through Sheamus Mills, a well-known bloodstock agent who is a close friend to Catriona and her husband Royston.

On the expectation that Dissident’s progeny would be popular, the Murphys tested the weanling market and were rewarded when the colt sold for $150,000 at the 2017 Magic Millions National Weanling Sale.

“We were delighted with that result,” Catriona said.

“He was a very nice weanling so we decided we were going to sell him because Dissident, being a first-season sire, we thought they would be well received.”

Dame Giselle is the sixth-named foal from Ballet Society, a Stravinsky mare who enjoyed wonderful racetrack success as a Group Two winner and Group One placegetter in the Thousand Guineas.

Ballet Society resides at Sledmere as part of the China Horse Club’s broodmare band that is kept on the property after she was purchased at auction for $350,000 carrying Dame Giselle, in 2017.

It has turned out to be an astute buy because Ballet Society continues to produce quality foals with high-end commercial appeal despite her advancing years.

“Lots of people are a bit funny about older mares but the proof is in the pudding. You don’t need to worry about that one.”

Catriona says the filly was always going to make a significant figure but her $500,000 purchase price is cheap now considering she has banked more than $600,000 from two racetrack appearances.

“She was an exceptional filly from day one. She had a lot of class about her, plenty of quality, really good action and an amazing temperament.

“I mean, you are halfway there really when you are wanting to get these horses to the track as two-year-olds.

“Attitude and temperament as part of the overall package is pretty important.

“When you’ve got it the rest just comes naturally, I imagine.”

Nothing has changed since Dame Giselle entered the Randwick yard of co-trainers Peter and Paul Snowden.

Peter Snowden, a master trainer of two-year-olds, insists Dame Giselle is a stable favourite because of her disposition.

“We’ve always liked her from day one. From the very first time she showed something and always had that good demeanour which I love about a two-year-old.” Peter Snowden said.

A Golden Slipper start is now a reality for Dame Giselle and a win in the world’s richest race for juveniles would add a special chapter to Sledmere’s rich history.

“We’ve had some really exciting horses come off the farm which is really great to see,” Catriona said.

“A lot of work goes into it … and to get the results, it’s pretty overwhelming I suppose.”