Pennino Takes It Easy In Guineas 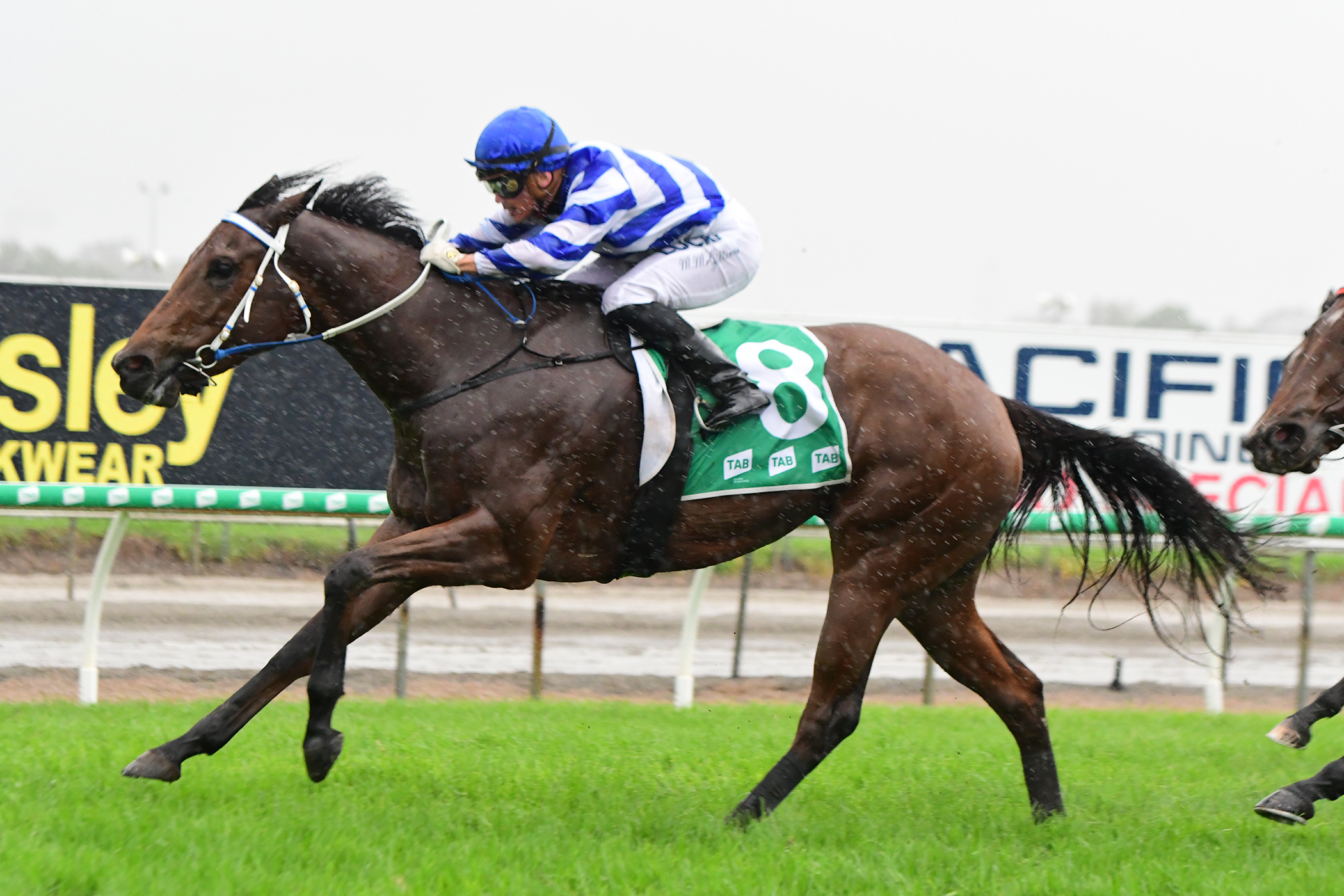 The connections of 3YO filly, Pennino, weren’t looking to the heavens for divine inspiration on Saturday … although they’d be the first to agree that every little bit helps.

No, they were mainly gazing skyward at the rather ominous clouds which had positioned themselves just nicely over the Gold Coast racetrack.

After all, while Pennino has performed well on good, soft and heavy surfaces, the majority of her rivals prefer a dry track.

“I’d be lying if I said I wasn’t ecstatic when the rain came,” Pennino’s trainer, Darryl Hansen, pointed out shortly after his gun filly notched up her first stakes success in the Group Three Brandons Gold Coast Guineas over 1200m.

“Pennino is by Easy Rocking and gets through the heavy with no trouble at all … she’s so consistent and a bit underrated. She’s never let me down.”

Having her 13th start in the Guineas, Pennino has won four races with a further four placings for $413,750 in stakes.

After finishing second on debut at two, Pennino peeled off three in succession and finished her initial season with three wins and two seconds from eight outings. Fittingly, she would be named Champion QTIS 2YO for 2017/18.

Bred and raced by Darryl Dunk, partner Susan Buckley and Bryce Lloyd, Pennino is now likely to be aimed for the Group Three Fred Best Classic at Eagle Farm on 25 May before a tilt at the Group Two Queensland Guineas a fortnight later.

“Susan and I have shares in six horses with Darryl (Hansen) including (4-time stakes winner) Monsieur Gustave, along with the two that we’ve bred: Pennino and her full brother Balboa Rocks (Listed Sunshine Coast Cup),” Dunk explains.

“We bred Alpha Girl, the dam of Pennino and Balboa Rocks, and she won a couple of races for us and so we decided to keep her and send her to stud. The first couple didn’t do much good but she’s had stakes winners with successive foals and, while her (2017) filly sadly had to be put down, I’m happy to say she’s back in foal to Easy Rocking.”

Based in Brisbane, Dunk has had a long-time interest in the horse caper and his father-in-law had raced multiple Group Two winner, Buck’s Pride (21 wins overall).

And, yes, while Monsieur Gustave had top billing in the Dunk/Buckley household, Pennino’s win on Saturday might just give her pride of place on the trophy shelf.

“I knew she (Pennino) was pretty good from the get go,” Dunk reveals. “She had her first start at the Sunshine Coast (Boxing Day 2017) and ran all over the place before flying home for a neck second. The next start (again at the Sunshine Coast) she won by five lengths.”

Pennino becomes the 12th stakes winner for the prolific Easy Rocking (65% winners to runners) who retired to Wattle Brae Stud in 2001 after five Group successes, including the Group One VRC Salinger.

“We foal down and rear the Alpha Girl foals on behalf of Darryl and Susan and then send them off to the breakers in due course,” Wattle Brae’s Stud Manager, Ian Brady points out. “She (Pennino) was a lovely type right from the word go, but I have to say that every one of her Easy Rocking foals were different types.

“That’s the thing with Easy Rocking … he’s never been that consistent in regards to the types he throws but he sure gets a lot of winners.

“He seems to work particularly well with Mr Propsector … Pennino is out of a Clang mare, while another of the Easy Rockings in Pepperwood is from a Woodman mare.

“I remember going up to a trainer who really liked Easy Rocking and said he should have a close look at Pepperwood, but he didn’t think much of him as a type.

“Anyway, Liam Birchley ended up with Pepperwood after paying $38,000 at the National Yearling Sale and he went on to win 11 races (five at stakes level) and over a million dollars!”

In operation since 1910, the Turkington family’s Wattle Brae is one of Queensland’s most successful farms and, standing alongside Easy Rocking this spring, will be More Than Ready’s multiple Group winner, Mahisara (oldest progeny 3YOs).

HOOFNOTE: A google search for Pennino brings up Pennino Brothers, once famous in New York for its costume jewelry, but Dunk confirms that his filly is named after the character in the Rocky movies, Adrian Pennino, who would marry Rocky Balboa.

And now you know where Balboa Rocks comes from too.