Guy Buy Is A Winning Peformer 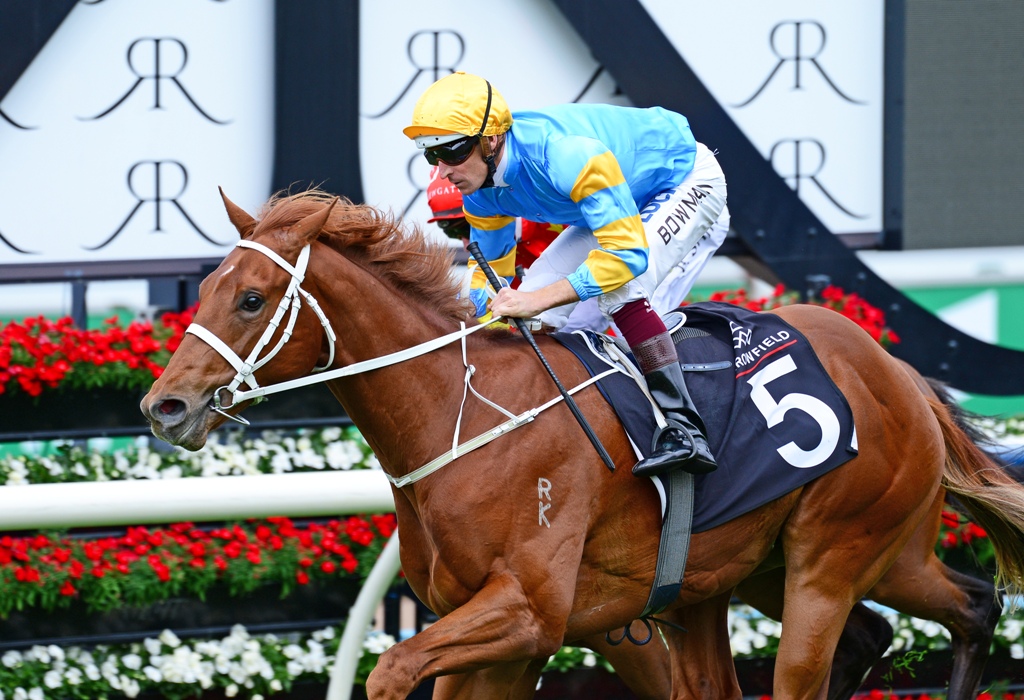 There’s always something special about those first 2YO races of the season.

While albeit hesitant to trot out the ‘box of chocolates’ metaphor, the reality of those early juvenile treats is that you don’t really know what you’ll get.

Take the Breeders’ Plate, for instance, and its lively 2017 renewal at Royal Randwick on Saturday.

Three of the previous six Golden Slipper winners – Capitalist (2016), Vancouver (2015) and Pierro (2012) – were first served up on a Plate before heading on to racetrack stardom, while many more Plate hopefuls have, sadly, faded into oblivion.

Only time will tell if Exceed and Excel’s nifty colt, Performer, lives up to his moniker and matches the deeds of previous Breeders’ Plate luminaries, but there certainly wasn’t too much wrong with the way he went about his work on Saturday.

One of six official 2YO barrier trial winners lining up in the Breeders’ Plate (1000m), Performer was sent out a $5 hope and raced three wide until turning for home. With Hugh Bowman on board, the colt levelled up with the leaders 100m from home and raced clear to win by nearly a length in the sharpish time of 56.82 seconds. Impressive indeed.

However, one of the things most media outlets focussed on was that Performer races out of the all-powerful Chris Waller stable.

While it’s widely understood that the champion trainer has few peers, he’s not exactly renowned for sending around early 2YOs: well, at least until Performer added to the silverware.

A well-bred customer, Performer is out of the Snippets mare, Gavroche, and was purchased by leading bloodstock agent, Guy Mulcaster, for $450,000 – from the Newhaven Park draft – at the 2017 Gold Coast Magic Millions Yearling Sale.

Mulcaster and Waller have been a formidable combination over the last few years – Winx, Preferment, Kermadec, Sacred Falls and Foxplay to name but a few – and Performer is among a batch of six yearlings / now 2YOs that the agent purchased earlier this year on behalf of a “Waller clients” syndicate.

And perhaps not surprisingly, the Performer ownership group includes part-owners of Winx and Black Caviar, along with other major investors.

“It was terrific to see Performer get up so early and win the Breeders’ Plate for the syndicate on Saturday,” Mulcaster enthused. “We’ve also got some exciting 3YOs coming through and our aim is to purchase quality types that will race on at three and four, yet I wouldn’t be surprised if another one or two of the juveniles are not too far away from a start.

“Performer was a tremendous yearling, just a really good strong colt, and aside from the Exceed And Excel factor (dual Champion Australian 2YO Sire, 138 stakes winners, Overreach, Earthquake, Guelph, Helmet, Reward For Effort etc.), the colt is also a half brother to Group One Galaxy winner, Bel Sprinter.

“The great thing about this syndicate though – and I have to say full marks to Chris (Waller)’s Racing Manager, Liam Prior, for pulling it all together – is that you can value a yearling and then bid accordingly. It means you can focus on something you really like at a sale and then have the ammunition to compete.

“Consequently, we’ve got some really nice, young horses on the books and hopefully Performer and company will repay their owners’ faith.”

The victory of Performer (by Exceed And Excel) proved to be an ideal launching pad to a memorable day for Darley based stallions at Royal Randwick with Golden Slipper/Blue Diamond winner Sepoy producing his first Group One winner via Alizee in the Flight Stakes, while Teofilo notched up a black type double with Happy Clapper winning the Group One Epsom after Ataraxia had captured the Listed Dulcify earlier on the program.

Meanwhile, the ‘boys’ weren’t left entirely to their own devices and the Breeders’ Plate was followed 35 minutes later by the time honoured fillies’ division, the Listed Gimcrack Stakes (first run in 1906).

Satin Slipper – trained by a pair very familiar with juvenile success in Peter and Paul Snowden – was a shade slow getting away in the Gimcrack and had to settle worse than midfield. However, despite giving the leaders over six lengths inside the final 300m, the filly kept on finding before getting her neck out in front on the wire. Again, Hugh Bowman in the saddle.

“She (Satin Slipper) came into the yard with plenty of presence about her and was very physical from day one,” Paul Snowden points out. “She’s improved dramatically with each prep and they are the sort of indications you look for in a 2YO. She certainly got the job done in the Gimcrack.”