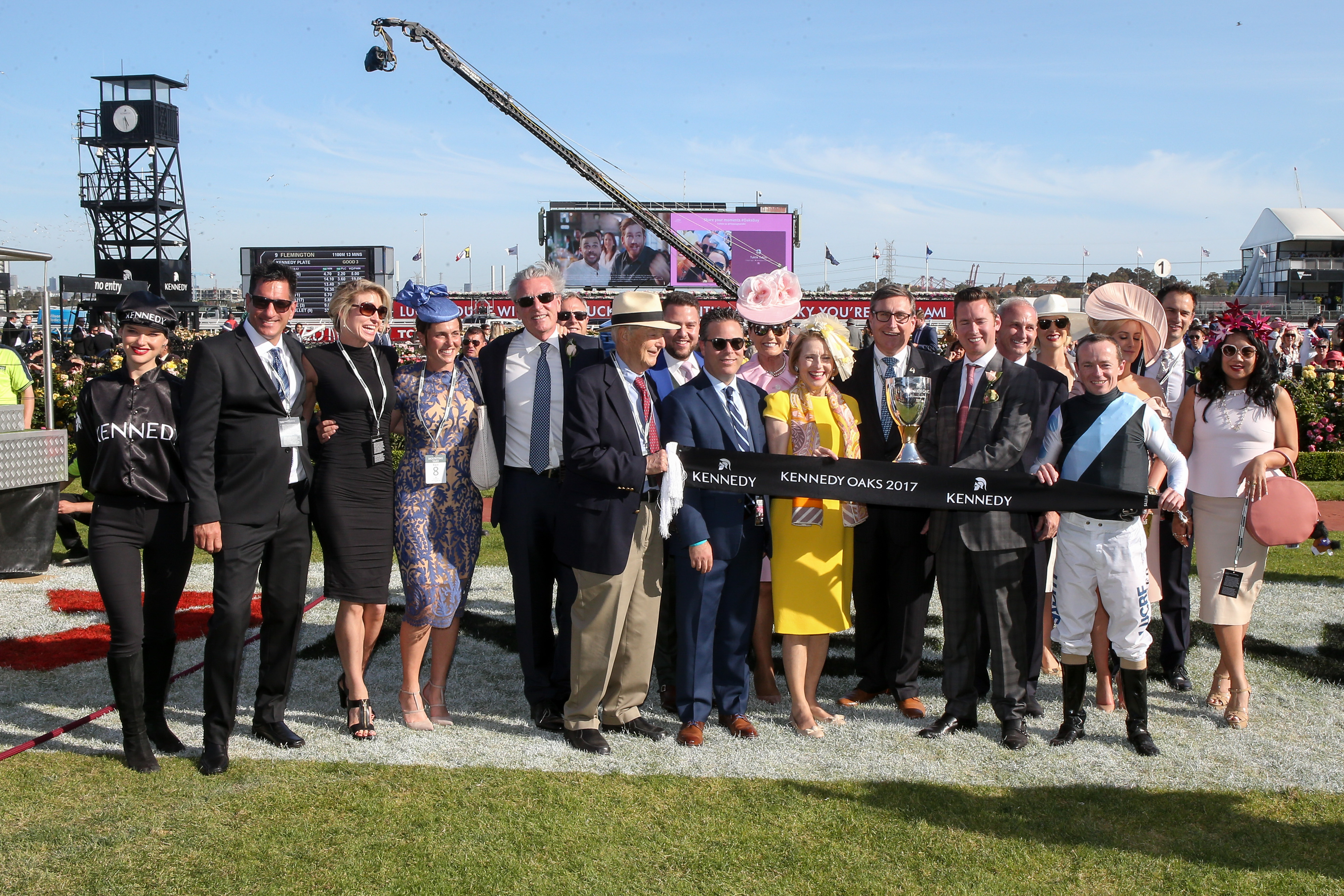 The legendary, Tommy Smith, had a lifetime involvement with horses: initially as a jockey and then as a trainer nonpareil.

However, he insisted that his now equally-if-not-more-famous daughter, Gai Waterhouse, should see the world before setting upon a training career and indeed she did, engaging in a number of professions both here and abroad. Crikey, she was even a nurse on Young Doctors and a pelt-wearing hunter in Doctor Who.

But, while her manner of speech reflects her Rose Bay education and mixing with the best circles, the vernacular is often pure Aussie.

Interviewed immediately after the victory of Pinot in the Group One VRC Kennedy Oaks over 2500m at Flemington last Thursday – her first win in a race which dates back to 1861 –  the ever effervescent Waterhouse told interviewers “she (Pinot) kicked their brains in, didn’t she”, which no doubt tickled the many international observers who had watched the race.

Among them was the filly’s part-owner, Aron Wellman of Eclipse Thoroughbred Partners, who had flown in from the States specifically for the race and departed shortly after.

In fact, Wellman was at the airport on his way back to Los Angeles when contacted by Thoroughbred Daily News’ Heather Anderson.

“I just got a call from from Gai on my way over to the airport and she, as only she can say, [said], ‘Pinot pulled up a treat and she licked the bowl … all that is ‘Australian’ for she pulled up wonderful and is in good nick,” Wellman laughed.

“We arrived (in Melbourne) on Wednesday morning, went to the race on Thursday and I’m in the lounge (on Thursday night) waiting to board the return flight.

“It’s been a bit of whirlwind for sure. It’s all good though … a very, very special experience.

“Having gotten to know Gai in the last few years and seeing how special it was for her, allowed the moment to really sink in quite a bit. To do it (win the Oaks) with such an icon like Gai is beyond words.

“Pinot will now get a little rest for about a month and then we’ll start mapping out the rest of her campaign.”

Eclipse Thoroughbred Partners is a major player in North America with nearly 50 black type victories since hanging out its shingle six years ago, but Pinot is actually Wellman’s first foray into the Australian market.

Shadowing Waterhouse at the 2016 Inglis Australian Easter Yearling Sale, Wellman thought he was there purely in ‘observer’ status, but ended up taking a healthy share in the Pierro filly from Dizelle after being knocked down to Waterhouse from the Coolmore Stud draft for $200,000. Others in the ownership include Waterhouse’s daughter, Kate, James Bester and Newgate Farm.

Following the Oaks victory, Pinot has now won three of her six outings, with two seconds and $733,275 in stakes.

“I think our program initially was purely to dip our toe into the shallow end of the water,”

“Obviously she’s paved the way now for us to get more serious about our Australian expansion and the program itself.

“Our concept was, just like anything else, to establish a track record down there – and that’s hard to do with just one horse – but to think that she’s able to carry the flag in such glorious fashion, with just one bullet in our holster is unfathomable really.

“We’ve got a couple of partners in this filly that are American-based but, they were the only two who were willing to take the plunge. Hopefully this success and this experience will pave the way for more expansion into the Australia market.”

Naturally enough, Coolmore Australia was over the moon with Pierro’s initial Group One winner and the 2YO Triple Crown winning son of Lonhro is Australia’s Leading Second Season Sire, with space.

“The Flemington carnival is one of the most competitive race meetings in the world, so it is an impressive demonstration of Pierro’s quality as a sire that no stallion had more stakes winners than him through the carnival,” Coolmore Australia’s Sales, Marketing & Racing Manager, Sebastian Hutch points out. “That his tally included his first Group One winner in Pinot was particularly rewarding and on the evidence of what we are seeing at the moment he looks to develop into a star sire of the future.

“The feeling is that this success is just the tip of the iceberg and that his class as a stallion will become more and more evident as time goes by. In the short term, the success that he is enjoying at the moment bodes well for his yearlings at the sales in 2018 given the yearling crop, his third, is significantly smaller than the two previous crops due to his abbreviated season in 2015.

“It certainly looks like 2018 will be a great time to have a Pierro yearling to sell!”

HOOFNOTE: Pinot is a half sister to five winners including Melbourne stakes winner, Dizlago and the multiple Group placed Lucky Lago. Her dam, Dizelle, was an Oaks winner in her own right, taking out the Sydney equivalent in 2005, while she, in turn, is out of the Group One Blue Diamond Stakes winner Danelagh.

Coupling her racetrack success with excellence in the breeding barn, Danelagh’s seven winners also include Hong Kong Horse of the Year, Vengeance of Rain, and dual stakes winner Bernicia, the dam of Group Two Tulloch winner and Pinot’s close relation in blood, Old North (by Lonhro).