On Board The Pippie Express 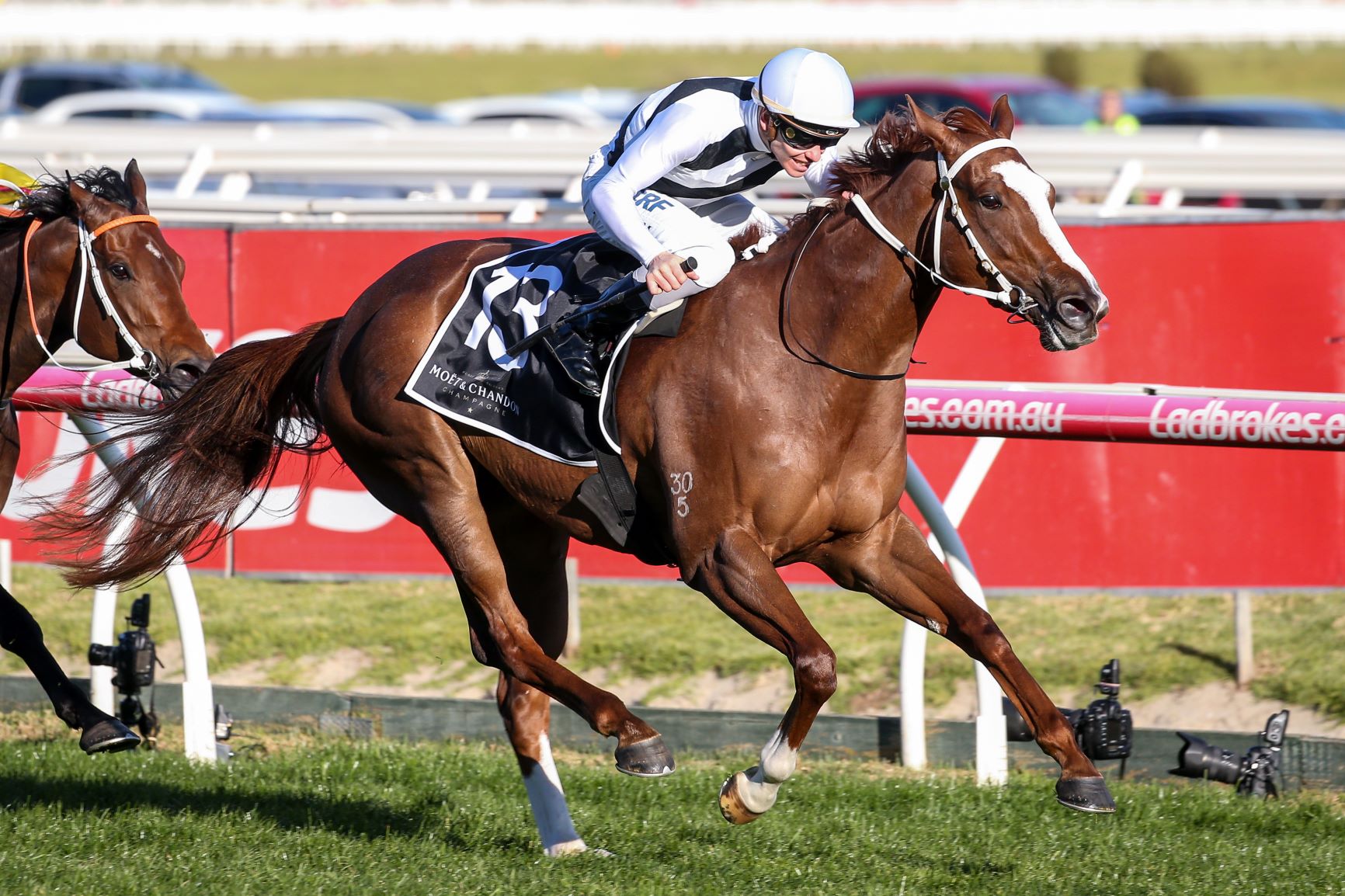 The rather flashy Written Tycoon mare sports a big, white blaze on her noggin and, what’s more, she has a tendency in her races to be front and centre as they turn for home.

That’s certainly been the case for the last three starts as Pippie has led from go to whoa: scoring by 3.25 lengths at Doomben in July after resuming from a near 12 month break; by 3 lengths over 1100m at Caulfield two weeks ago and; on Saturday, over 1200m at Caulfield. This time around the margin was cut by half but Pippie was no less impressive in her first tilt at black type.

It won’t be her last!

Co-trainer, Chris Meagher, suggests that the mare is next likely to tackle the Group Three How Now Stakes over the same journey at Caulfield on 21 September, and – with all things being equal – a tilt at the Group Three Begonia Belle Stakes (1100m) down the Flemington straight on Derby Day.

“That (the Cockram Stakes) was the first time she really had to dig in and is clearly a classy mare,” Meagher enthused. “The How Now will, fingers crossed, give her the three wins at Caulfield and while there are a lot of rich races in the spring, I genuinely believe Pippie will be even better in the autumn. The last thing we’re going to do is rush her.”

Pippie has raced on just the six occasions for four wins, scoring by 5 lengths at Cranbourne on debut in July 2018, then a second at Moonee Valley, followed by her only ‘miss’ thus far – a seventh in last year’s Group Three Quezette Stakes.

“Pippie pulled up sore from the Quezette (2.05 lengths behind Sunlight) and we decided to give her plenty of time off,” Meagher reveals. “She’s definitely maturing, but still have to treat her with kid gloves as she can lighten off quite quickly.”

For Meagher, this was his second Cockram Stakes, having also trained 5-time stakes winning mare, Savanna Amour to victory in 2017.

The Meagher family is synonymous with racetrack success in both Australia (17 Group Ones) and Singapore (9 Group Ones) with close to 100 black type victories overall and Chris’s father, John, trained 1985 Melbourne Cup winner, What A Nuisance. Chris’s brother, Dan, is currently a leading trainer in Singapore.

“We purchased Pippie for $60,000 from the Eureka Stud draft at the (2017) Inglis Classic Yearling Sale in Sydney,” Meagher adds. “Apart from the Written Tycoon (29 stakes winners) factor, there was a lot of quality about her. According to the E-Trakka, she has the longest stride of any horse in the stable, which obviously allows her to get over more ground, more quickly.

“It’s terrific for her owners (Glenn and Martin Heran) who are fantastic supporters of the stable.”

Queensland based, the Herans have been involved in racing for the last 30 years and currently have six in work.

“It (the Cockram Stakes) was a bit heart in mouth, but a tremendous thrill to see her win the way she did,” Glenn Heran reveals. “We’ve had horses with the Meaghers for around six years and it’s been a great association … hopefully even better in the coming months.”

Local builders, the Heran brothers also own a farm at Maudsland, some 30 minutes north of the Gold Coast.

“Our best horse to date was one we bred ourselves called Startsmeup,” Heran recalls. “He was by Danzero out of a Bluebird mare and we took him to the MM sales but the best offer was $65,000. We weren’t going to take that so we raced him and he went on to win over $750,000!”

(Trained by Bruce Hill, Startsmeup won the Group Three George Moore and six other races, but would also have top four finishes in 12 more black type events).
“Our racing and breeding operation is managed by Katrina Smith and she does a tremendous job,” Heran explains. We spell our racehorses at the farm and breed from a handful of mares in the Hunter Valley.”

Pippie’s Cockram victory was also cheered on by Eureka Stud … with good reason.

“We purchased her (Coupe Express) from James O’Brien’s Lauriston draft for just $26,000 at the (2015 Inglis) Melbourne August Sale and she was in foal to Written Tycoon,” McAlpine points out. “Pippie was her first foal, while her next was a Spirit of Boom filly who is also owned by the Herans and is with John and Chris Meagher too. She’s an unraced 3YO but I’m hearing very good reports about her.

“Coupe Express has a Defcon filly we’ll likely take to the 2020 Gold Coast Magic Millions in January and, after missing last spring, we’ll send her to Spirit of Boom this year and, depending on how Pippie goes, back to Written Tycoon next year.”