Lots To Think About With Derby Success 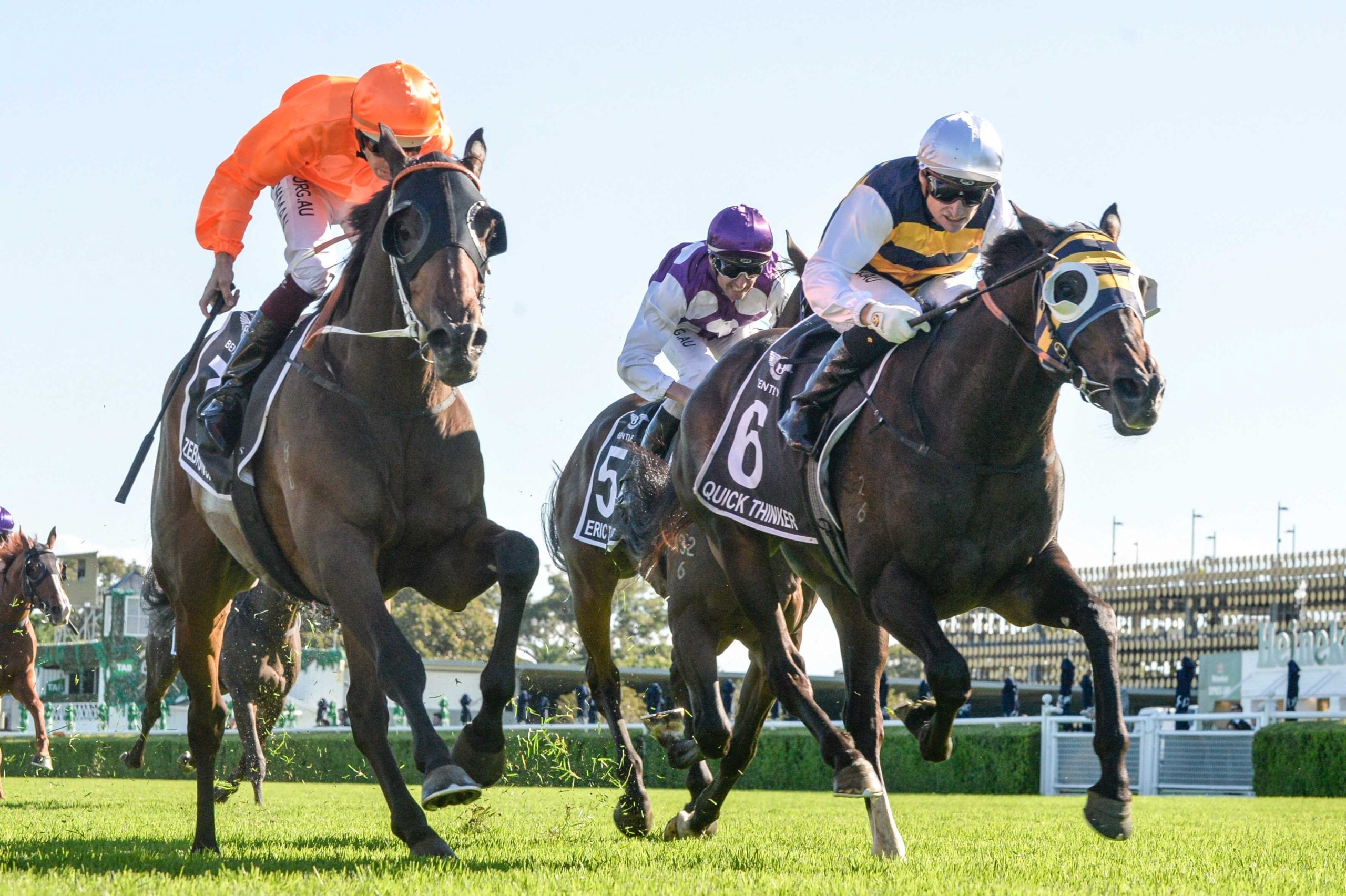 It was a ‘Classic’ finish to say the very least.

In Saturday’s $1 million Bentley Australian Derby over 2400m at Royal Randwick the aptly named, Quick Thinker, held off a spirited challenge from Zebrowski to win a race which has been around since 1861 (yes, as old as the Melbourne Cup).

The same pair had fought out the finish of the Group Two Tulloch Stakes (2000m) at Rosehill just seven days earlier, albeit with Quick Thinker having something more up his sleeve over the shorter course.

This time around though, Quick Thinker had to pull out all stops – true grit – to prevail by a whisker and take his overall tally to four wins and four placings from 11 starts for $1,010,228 in prizemoney.

Saturday’s race also illustrates the depth of quality in Australia’s sprinting and staying ranks, with 17 of the past 20 Group One Derby or Oaks winners bred locally, although Quick Thinker has a decidedly international flavour to his story.

Bred by a third generation Australian breeder, Quick Thinker was sold as a weanling to South African born bloodstock agent (James Bester), then re-offered as a yearling at Inglis Easter where he would be purchased by an Irish agent (Hubie deBurgh) on behalf of the globally successful, Australian based OTI Racing.

Owned by Terry Henderson, OTI Racing has been a major player on the world stage for the past 20 years – Gailo Chop, Manighar, Brambles, Aloisia, Vin de Dance, Kibbutz et al – but Quick Thinker’s breeder, Andrew Bowcock, can lay claim to a ‘pedigree’ dating back to the 1930s.

“My grandfather established Alabama Stud in the Hunter Valley nearly 90 years ago and I’ve been involved with horses all my life – professionally for the last 40 plus years,” Bowcock explains. “We’ve had a bit of success come our way … we stood the stallion, Beautiful Crown, who produced 2003 Group One Caulfield Guineas winner, In Top Swing, out of one of our mares, while the dual Group One winning sprinter Response hails back to Relive – my foundation mare from the 80s who I managed to save after the owner wanted to put her down.

“Response has since gone on to produce the Golden Slipper winner, Estijaab (bred by Jungle Pocket Pty Ltd) and we’ve also had winners of the Breeders’ Plate and Gimcrack, but Quick Thinker is our first Derby winner and I couldn’t be prouder.

“I sold my farm around 10 years ago and moved to Brisbane and we’ve only got a handful of mares, so it means a lot to win such a time honoured race.”

The sixth individual Group One winner for Coolmore’s So You Think (24 stakes winners overall), Quick Thinker is out of the stakes placed Al Maher mare, Acouplamas, in turn a close relation to Danehill’s Victoria Derby winner Blackfriars and his Group One South Australian Oaks winning full sister, Larrocha.

Bowcock would purchase Acouplamas for $115,000 at the 2013 Gold Coast Magic Millions National Broodmare Sale, who was in foal to Widden Stud’s Sebring at the time.

“After I moved to Brisbane, I still did a bit of work with Widden in the noms area, and Acouplamas was one of their ‘trade’ mares,” Bowcock recalls. “I really liked her though and thought she’d be a great addition to our small band.

“The first foal (Sebeauty) didn’t win a race, but the next – another Sebring called Seasons – is with Les Bridge and broke a class record at Randwick last December.

“The following foal was an I Am Invincible, The August, who was Group placed but has ended up in Singapore.

“Quick Thinker is Acouplamas’ fourth foal and we sold him to James Bester as a weanling for $180,000 at the 2017 Magic Millions National Weanling Sale before Coolmore then sold him on for $100,000 at the 2018 Inglis Easter Yearling Sale.

“It might look a bit of a disastrous pinhook on paper, but James is clearly a great judge and, let’s face it, he picked out a future Derby winner!”

Acouplamas would slip to So You Think and miss to Sebring in the following two seasons after the Zoustar, but was covered by Trapeze Artist last spring and is in foal.

Although Bowcock doesn’t have an Acouplamas yearling to sell in 2020, he might have the next best thing.

“On the back of what Quick Thinker was showing (winning the Listed Champagne Stakes at Ellerslie in April 2019), I purchased a Star Turn filly from Capable Mahira – a full sister to Acouplamas – for $52,000 at the National Weanling Sale.”

Now the Star Turn filly is one of the features among the 6-strong KBL Thoroughbreds draft for the 2020 Inglis Easter Yearling Sale and will be offered as Lot 367 on Wednesday.

“KBL is run by Kandice Pritchard and her husband, Brad, and Kandice used to work for Murray Murdoch (Fig Tree Stud),” Bowcock points out. “When Murray leased his property, Kandice went out on her own and, in the second year under the KBL banner, sold the million dollar Zoustar for us.

“I’ve been involved with a lot of great horse people in my life but she’s one of the best.”
Although based at Beaudesert in Queensland and selling up to 100 horses annually – consigning drafts to the Magic Millions, Sydney Classic and QTIS sales in 2020 – the Pritchards have been forced to take the “show on the road” for Easter.

“With all the uncertainty over coronavirus, we made the decision to bring the horses to the Hunter Valley last Sunday week and Fergal Connolly has very kindly ‘housed’ us at Valiant Stud,” Kandice Pritchard explains. “It’s obviously not the ideal situation for any of us and while there are some notable prospective buyers missing, all the right people have inspected our draft over the past week.

“The Star Turn is absolutely stunning … very strong and built like a colt,” Pritchard adds. “She’s totally unflappable and there’s going to be even a lot more interest in her after Saturday.”